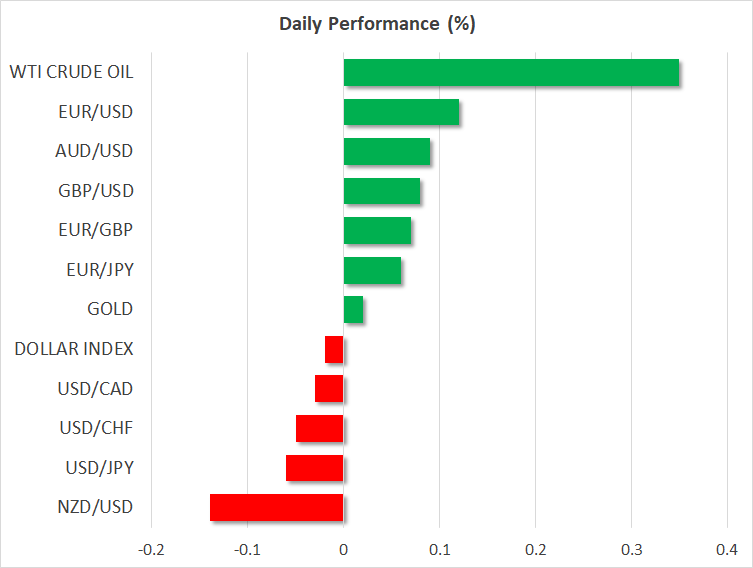 Wednesday was another relatively calm day in terms of news flow, with most of the price action in the FX market being driven by the continued climb in longer-term US Treasury yields. The yield on 10-year notes climbed to 3.035% before retreating slightly, lending support to the US dollar, which was the stark outperformer among the major currencies. Euro/dollar touched a two-month low, while dollar/yen rose to a three-month high.

It will be most interesting to see how this surge in yields plays out. The break above the widely-touted 3.0% handle in 10-year US yields earlier in the week seems to have opened the way for even higher levels. While a pullback in yields shouldn’t be ruled out in the coming days given that the current rally seems a little overextended, the trend is clearly to the upside and should it continue, the dollar may continue to regain lost ground.

On the contrary, a sustained advance in yields would likely spell bad news for stock markets. Major indices have been struggling recently, as investors adjust to the reality of rising borrowing costs for most of these firms, which could hinder their ability to buy back their own stocks, and also increase the cost of financing their old debt, squeezing profits.

Elsewhere, aussie/dollar and kiwi/dollar continued to collapse yesterday, both reaching fresh four-month lows. The aussie has now slid for five consecutive days against the dollar, while the kiwi is on an eight-day losing streak, with price action in both pairs increasingly resembling “a falling knife”. 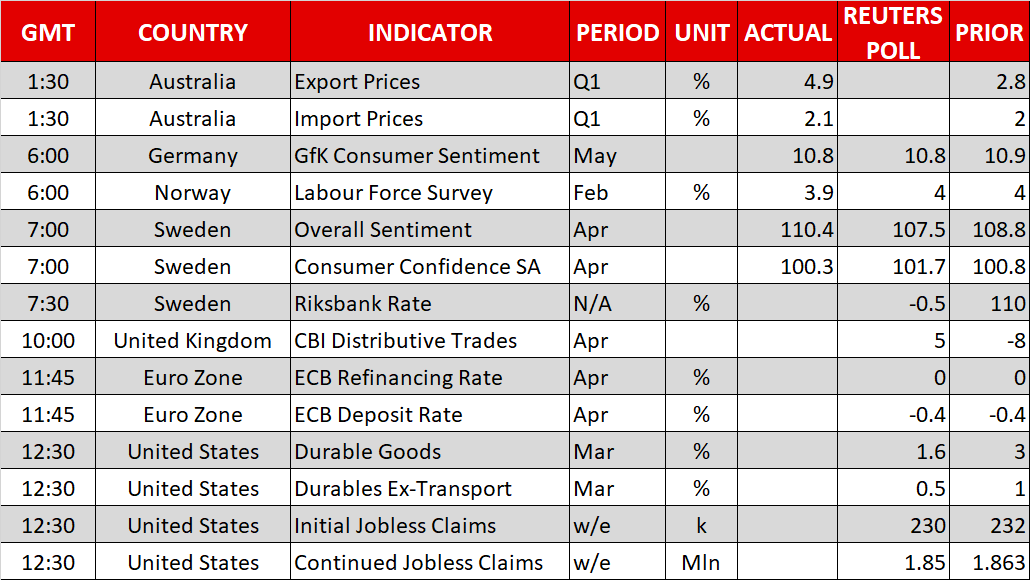 Day ahead: ECB meeting the day’s highlight; US durable goods orders due

Thursday features the conclusion of the European Central Bank’s two-day meeting on monetary policy. Although no change in policy is expected, the Bank’s communication – its forward guidance –is of importance and is likely to lead to movements in euro pairs.

The Riksbank’s interest rate decision is due at 0730 GMT. No change in rates is expected, though the Swedish central bank may lift its inflation forecast, something that could support the krona which has declined considerably year-to-date relative to majors including the dollar and the euro. Stefan Ingves, the Bank’s governor will be holding a press conference at 0900 GMT.

At 1145 GMT, the ECB’s decision on interest rates will be made public. The Bank is widely anticipated to stand pat, but it would be interesting to see whether it decisively starts to signal that it will end its asset purchases by the end of the year, or if it appears more cautious in the face of weakening economic momentum and inflation pressures as projected by recent data releases. If it’s the latter, then the euro is expected to depreciate, likely hitting fresh lows versus the greenback; earlier in the day euro/dollar revisited the near two-month low of 1.2159 hit yesterday. ECB President Mario Draghi’s press conference beginning at 1230 GMT will also be closely watched, with market moving comments “being on the agenda”.

Earlier in the day (1000 GMT), the UK will see the release of the Confederation of British Industry’s distributive trades retail sales balance for April. An improvement is anticipated for the figure to rise back into positive territory.

The attention will next turn to the US: durable goods orders for March and initial & continued jobless claims for the week ending April 20 are scheduled for release at 1230 GMT.  Durable goods orders, which gauge business spending on equipment, are forecast to expand for the second straight month, albeit at a softer pace relative to February. The number on core durable goods that excludes transportation will also be attracting interest.

In equities, Microsoft and Amazon, the world’s third and fourth largest companies by market cap will be releasing quarterly results on Thursday; both companies’ reports will be made public after the US market close. 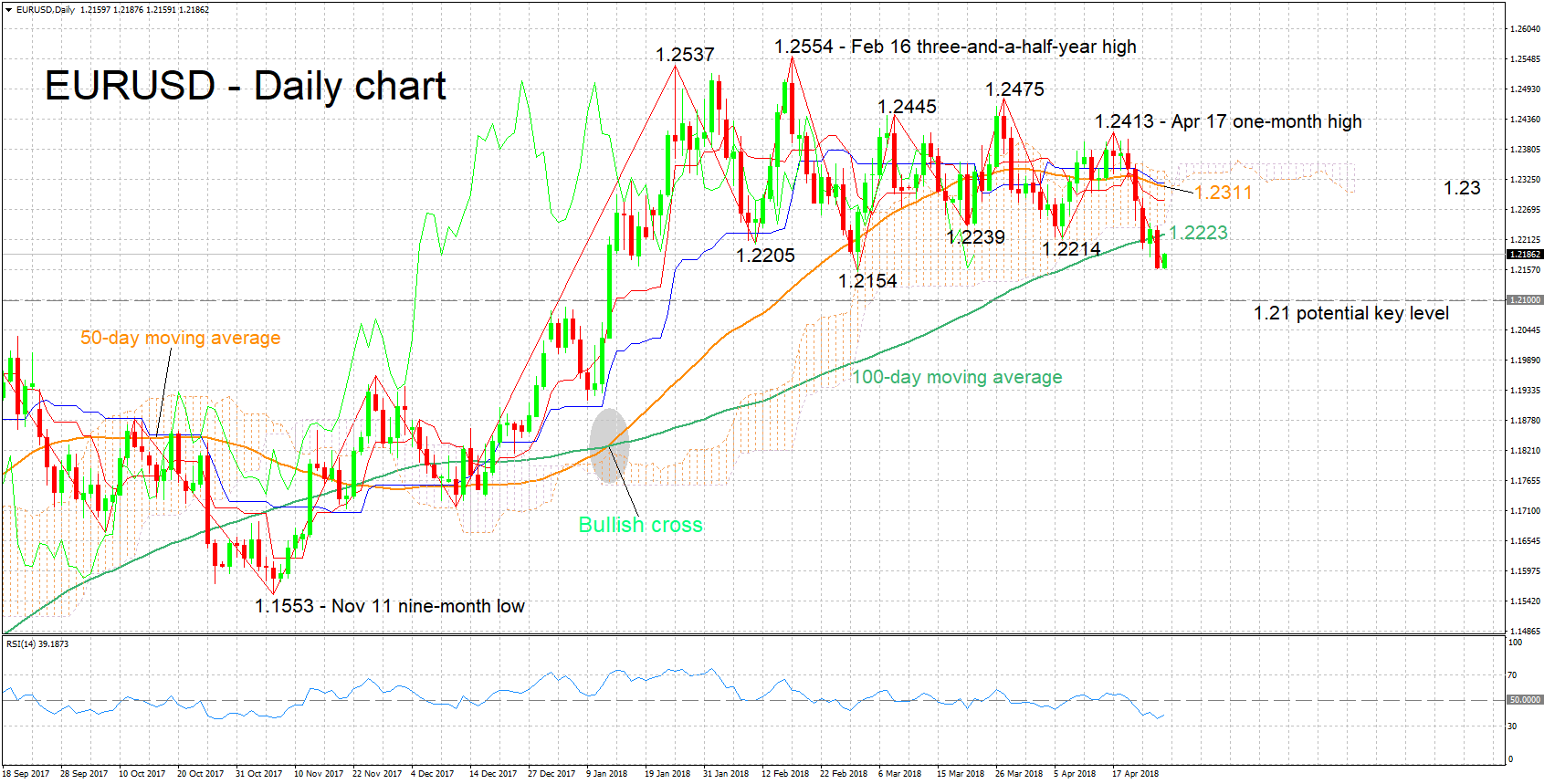 EURUSD has experienced considerable declines after recording a one-month high of 1.2413 on April 17. Earlier on Thursday, it fell to 1.2159, matching yesterday’s near two-month low. The Tenkan-sen line is below the Kijun-sen in support of a bearish short-term picture. The RSI, having retreated below its 50 neutral-perceived level, also supports the view for negative momentum, though it seems to have stalled its decline; this could be an indication of a weakening bearish bias.

A hawkish message by the ECB later on Thursday is likely to boost the pair. Resistance to advances could come around the current level of the 100-day moving average at 1.2223; the area around this level encapsulates a few bottoms from previous months, the Ichimoku cloud bottom (1.2242), as well as the 1.22 round figure. Further above, the range around the 1.23 handle would be eyed (which again includes numerous points that may be of importance).

Conversely, a dovish ECB is expected to exert downward pressure in EURUSD. Immediate support to declines could come around 1.2154, this being March 1’s three-and-a-half-month low. A downside violation would turn the attention to the 1.21 handle, with 1.20 being the focus next in case of even steeper losses.