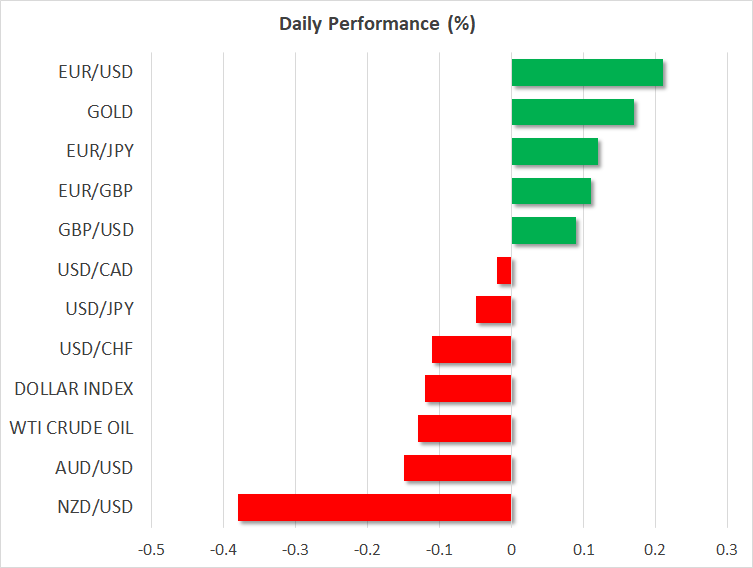 Global risk appetite recovered on Wednesday, with European and US equity markets advancing alongside commodity-linked currencies such as the aussie and loonie, while haven assets such as the Japanese yen surrendered ground. The key catalysts behind these moves were signs that Italy is ready to “blink” in its budget standoff with the EU, coupled with reports enhancing the narrative that a Sino-American “trade ceasefire” is looming.

In Italy, Finance Minister Tria hinted that his government would seek a shared solution with the European Commission over the highly-controversial budget, noting that the dispute is hurting the Italian – and by extent the European – economy. Investors evidently interpreted his comments as a signal that despite the broadly confrontational rhetoric, Rome is keen to avoid a prolonged and damaging showdown, sending Italian bond yields lower and the euro higher.

On the trade front, reports suggest White House advisor Peter Navarro has been excluded from attending the upcoming Trump-Xi Jinping meeting. Global stocks breathed a sigh of relief, as Navarro is probably the most hawkish US administration member towards China. Thus, his exclusion was seen as a sign Trump is indeed aiming to strike a deal. While a “ceasefire” next week now looks increasingly likely, and could provide some short-term relief to markets, it’s unlikely to spell the end of the broader dispute, as neither side appears willing to budge on the big issues just yet.

In the US, the dollar was pinned down by a story the Fed will consider pausing its hiking cycle early next year, citing “senior Fed officials”. Adding credence to such speculation, US durable goods disappointed, pointing to weak business investment in Q4. This is an ominous sign, as the latest collapse in oil prices argues for even weaker capital spending by energy firms going forward. That said, Fed rate-hike pricing is already quite cautious, implying that investors may want to see concrete evidence the US economy is slowing before repricing it in an even more dovish direction.

Thursday’s a light calendar day, with US markets being closed for the Thanksgiving holiday, something which is translating into thin trading volumes. That said, the ECB minutes pertaining to the Bank’s latest meeting will be attracting interest, with the themes of Brexit, the EU-Italy budget standoff and the Sino-US trade dispute remaining at play.

The official record of the ECB’s October meeting will be made public at 1230 GMT. Market participants will be looking for any signals the Bank’s policymakers are getting less confident about their rate normalization plans in light of not-so-encouraging economic releases out of the euro area.

The previous guidance signaled a move towards the latter part of 2019. At the moment, markets have marginally moved away from completely pricing in a 10bps rate increase in late 2019 and it will be interesting to see if ECB members’ views lend credence to that. If that’s the case, then the euro is expected to depreciate, to state the obvious.

On the data-front, eurozone flash consumer confidence data for November due at 1400 GMT are anticipated to show the relevant index falling to its lowest since May 2017. For comparison, US consumer confidence as gauged by the Conference Board rose to a fresh 18-year high in October.

Also euro-related are developments having to do with Italy’s budget. The European Commission yesterday identified the country as being in serious non-compliance with the budget rules. Market participants’ anxiety was eased to an extent though, as Italian PM Conte expressed concerns about rising Italian government bond yields and committed to reforms. However, investors may be complacent to an extent on this front, as the prospect of an EU-Italy clash is well on the table.

Sterling is again expected to remain sensitive to any Brexit headlines. PM May made reference to progress after her meeting with the EU’s Juncker yesterday, though a few sticking points remain at play. May will be given some time on Sunday to address the EU heads of state at the extraordinary Brexit summit taking place. 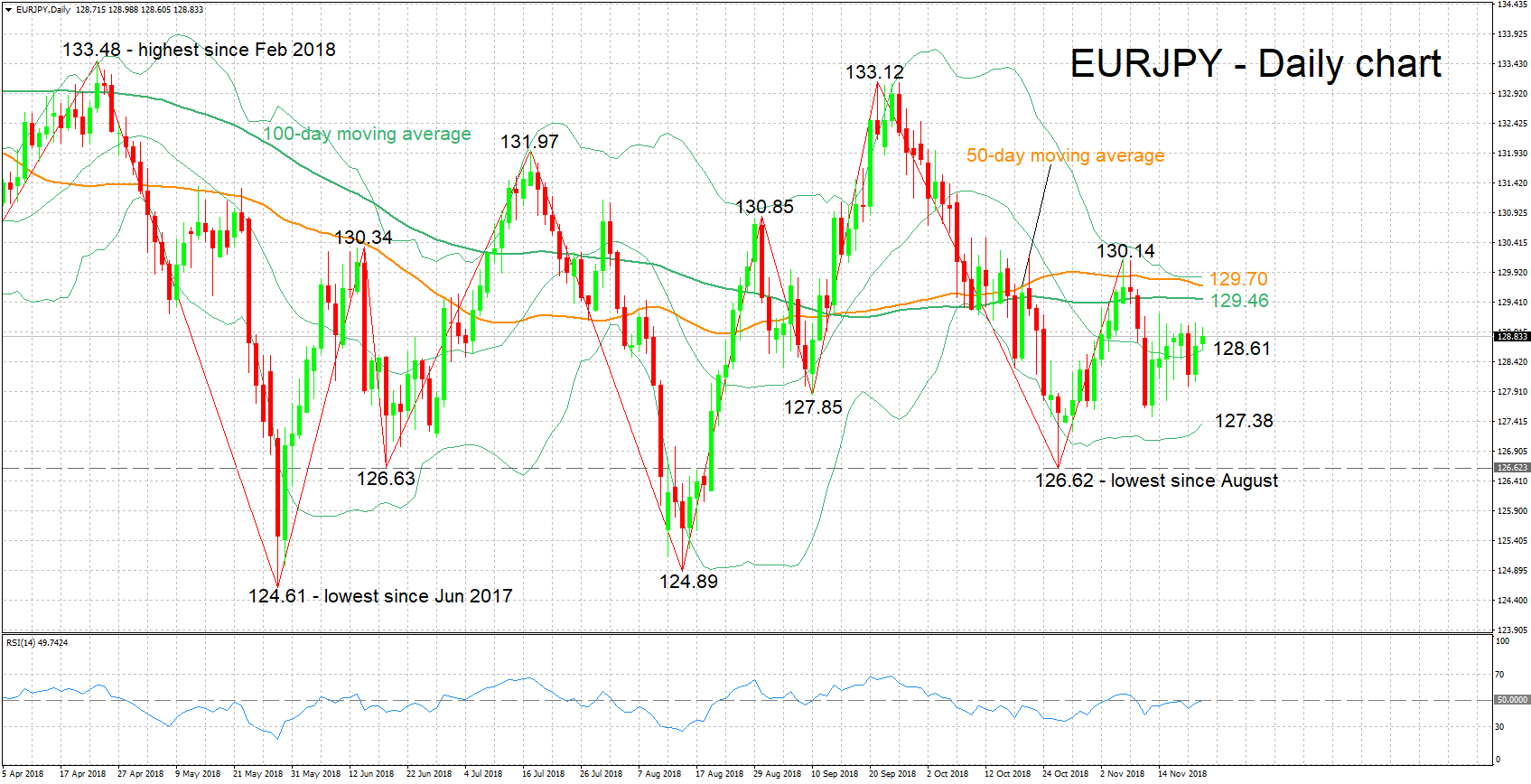 EURJPY has been moving within a relatively narrow range lately. The RSI, which has been hovering around the 50 neutral-perceived level throughout this period, is projecting a mostly neutral short-term picture for the pair.

Should today’s minutes show a relatively dovish ECB, then the pair is expected to depreciate. A violation of the middle Bollinger line – a 20-day moving average line – at 128.61 would turn the attention to the area around a previous bottom at 127.85 for additional support – not far below this point lies the lower Bollinger band at 127.38. Lower still, 126.62, the pair’s lowest since August would be eyed.

On the upside and in case of an upbeat ECB, resistance could come around the current levels of the 50- and 100-day moving average lines at 129.46 and 129.70 respectively, with the upper Bollinger band (129.83) also being part of the region around them. Not far above is a previous top at 130.14, with the zone around in including the 130 mark and another high from previous months as 130.34. Even higher, the area around the 131 handle would increasingly come into scope.

EU-Italian relations and risk-off flows can also move the pair.