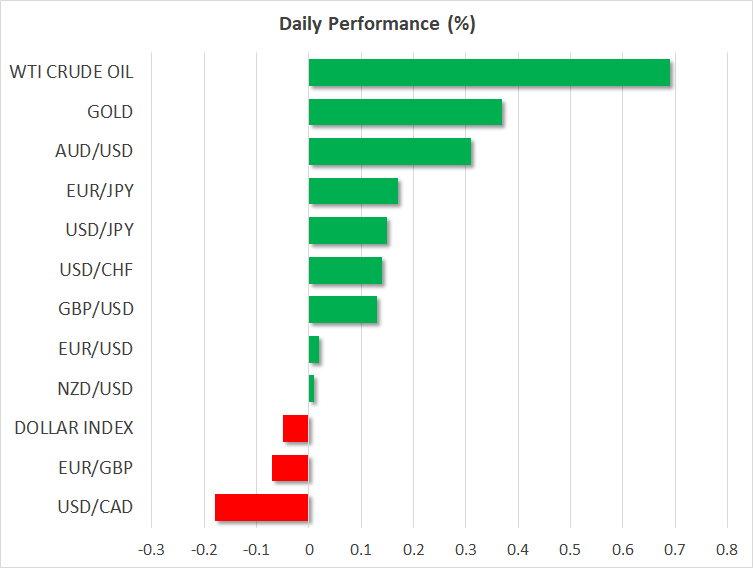 Dollar rips higher, but can the bulls stay in control?

The greenback shined for yet another session, continuing its unrelenting rally for an eighth day in a row versus a basket of major currencies, without much in the way of news flow behind the move. Traders seem to be having second thoughts about the likelihood of a US-China trade deal this month, and in their search for a hedge are turning to world’s reserve currency, which has been the safe haven of choice throughout the trade dispute. Beyond that, the dollar’s latest gains also seem owed to investors staying away from other major currencies, most notably the euro and pound amid European growth concerns and Brexit uncertainties respectively. In other words, the US – and by extent its currency – remain a ‘decent house in a bad neighborhood’.

Can this rally continue? A lot will likely depend on what signals come out of the trade talks later this week, though admittedly, the speed and magnitude of the latest gains suggest some cause for caution in the immediate term. Today, the greenback will likely take its cue from Fed Chairman Powell, who will deliver remarks at 17:45 GMT. He has clearly shifted to a more dovish stance, and it will be interesting to see whether more “cautious” rhetoric can erode some of the dollar’s recent appeal.

Risk appetite buoyed by news US shutdown may be averted

After closing little changed on Monday, US stock markets seem set to open notably higher today, according to futures. Asian indices are also in the green for the most part, while the traditional safe haven, the Japanese yen, is the worst performer in the G10 FX sphere today.

The catalyst for these moves were likely headlines overnight that Republicans and Democrats reached a “tentative deal” to avert another government shutdown, which was set to commence on Friday. Some remarks by the US President – who was speaking at a rally in Texas – that “we are going to make great deals on trade”, likely helped as well.

In equity markets, the earnings season continues with Activision Blizzard and Under Armour being among notable names releasing their quarterly results today.

RBNZ may appear dovish, but not as much as markets expect

The Reserve Bank of New Zealand (RBNZ) will announce its policy decision during the early Asian session on Wednesday, at 01:00 GMT. No change in policy is expected, and in the wake of some recent disappointing employment data, investors seem to expect policymakers to strike a much more dovish tone. Admittedly, New Zealand’s economy is losing steam, and given also a plethora of external risks, it wouldn’t be a surprise to see the central bank actually cut rates later in 2019.

Having said that, a quarter-point rate cut this year is now priced in with an 86% probability, which implies markets believe this is practically a done deal. So, while the RBNZ may indeed strike a more cautious tone and keep a rate cut firmly on the table, it will likely retain some optionality, and may thus find it difficult to live up to the market’s overly dovish expectations. To be clear, given just how dovish market pricing is, anything short of a clear signal that rates may be cut soon could elicit a positive reaction in the kiwi, reminiscent of a “buy the news” move.

In the bigger picture, though, the outlook for the currency remains bleak overall.