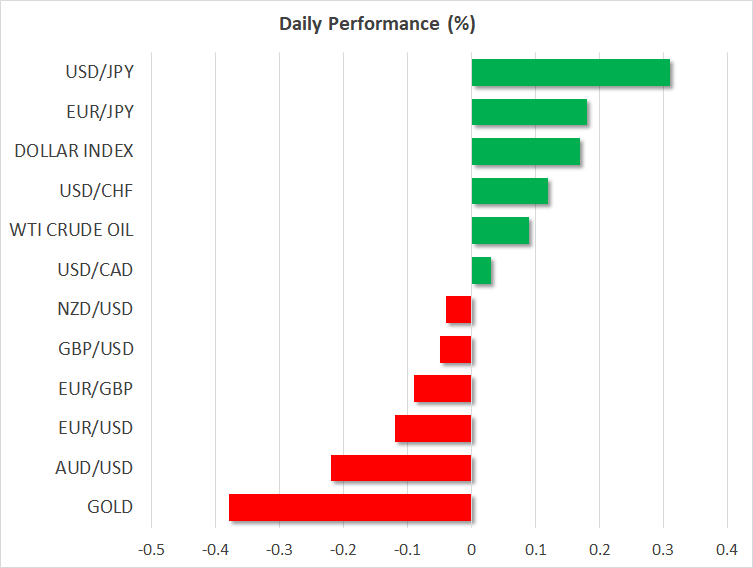 Dollar unimpressed by strong US data, as Fed casts shadow

Nonfarm payrolls smashed expectations in January, clocking in at a robust 304k, much higher than the anticipated 165k – though last month’s print was revised down significantly, mitigating some of the good news. Wage growth held steady at 3.2% in annual terms, with December’s figure being revised higher to 3.3%. Separately, the unemployment rate ticked up, but for ‘healthy’ reasons as the labor force participation rate rose as well, indicating that a greater number of people were interested in finding work. Overall, this was yet another employment report reaffirming that the US economy is in good shape.

Likewise, the ISM manufacturing PMI staged a strong recovery in January, alleviating concerns that ‘dark clouds’ are gathering on the horizon. Yet, the dollar was largely unable to rally in the aftermath, closing the session only marginally higher versus a basket of six major currencies. Investors seemingly interpreted these data as augmenting the narrative that the Fed will be on hold for a while. The absence of a pickup in wages coupled with the continued rise in the labor force participation rate, suggests that there’s still some slack in the labor market, vindicating the central bank’s ‘patient’ approach. This probably explains the modest gains in US stock markets as well, even despite disappointing guidance by retail giant Amazon (-5.38%).

Some encouraging comments around trade over the weekend are supporting risk appetite early on Monday, with Japanese stocks being in the green while the safe-haven Japanese yen is on the retreat. Several markets in Asia are closed for the Lunar New Year.

On the trade front, President Trump played up hopes for a near-term solution in his latest comments, indicating that he sees a “good chance” of striking an accord with Beijing. Reports suggest he may meet with his Chinese counterpart at the end of February to iron out the big issues. The zeal with which both sides are pursuing a deal suggests that the likelihood for one is likely high, and if this optimism lingers in an environment where the Fed is firmly on hold, that paints a brighter picture for risky assets – most notably stocks.

Aussie on the back foot ahead of RBA

The Australian dollar is on the back foot today despite the positive risk backdrop, following data out of Australia overnight showing a bigger-than-expected drop in building approvals. The next risk event for the aussie will be the rate decision by the Reserve Bank of Australia (RBA) on Tuesday, at 0330 GMT. No change in policy is expected, and as such, market attention will fall on the statement accompanying the decision and any updates in the economic forecasts. Recent developments suggest the Bank could strike a more cautious tone with respect to future policy, and if so, that could keep the aussie under pressure.

In terms of economic data, the highlight on Monday will be the UK construction PMI for January. The manufacturing index disappointed on Friday, adding another dimension to UK-related uncertainties, though sterling/dollar found support near its 200-day simple moving average and subsequently rebounded. A similar disappointment today could ignite speculation for a dovish bias by the BoE when it meets again on Thursday. As always though, any Brexit news could eclipse all else.

In the Eurozone, producer prices for December are due, while in the US, factory orders for November will be in focus.