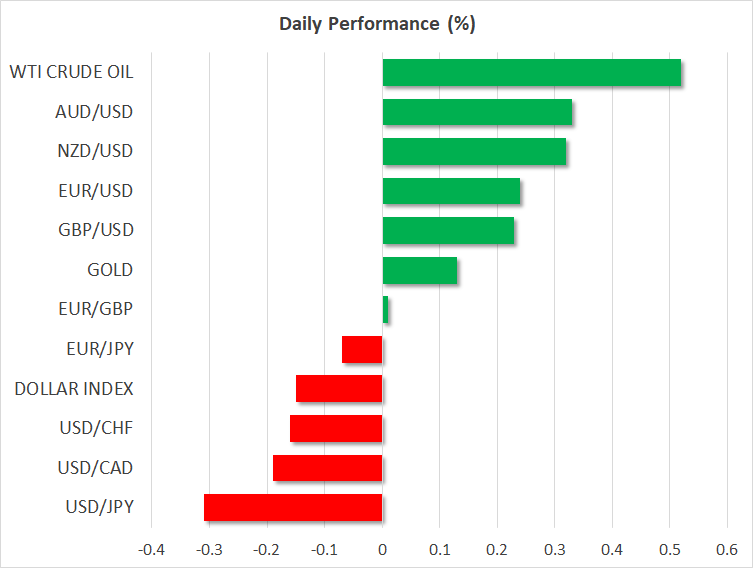 While the Fed kept rates unchanged as expected yesterday, the meeting wasn’t short of surprises. Policymakers adopted an even more cautious tone, dropping the reference that further gradual rate hikes will be needed, instead reiterating the mantra that they will be ‘patient’ for now. Chair Powell’s press conference wasn’t any different. He was hesitant to specify whether this is the end of the hiking cycle or not, noting that for more hikes to become necessary, inflation would likely need to pick up substantially. The officials also confirmed that the balance sheet unwinding could end soon; another dovish hint.

The dollar retreated across the board as US bond yields fell, diminishing some of the reserve currency’s carry appeal. Meanwhile, the signals for lower rates for longer propelled riskier assets higher, with both the S&P 500 (+1.55%) and Dow Jones (+1.77%) recording meaningful gains. Dollar-denominated gold also posted new multi-month highs on the back of a weakening greenback.

Focusing on the dollar, while the Fed’s U-turn is clearly negative for the currency, it must be noted that market pricing on future hikes was already largely non-existent. Hence, while the overall mood around the greenback indeed seems to be gradually shifting, the reserve currency is unlikely to lose all its shine overnight either, as yield differentials remain wide, and in its favor. That is, until – and if – other central banks such as the ECB start turning more ‘confident’, which seems unlikely over the coming months at least.

The latest round of US-China trade negotiations that commenced yesterday will wrap-up later today, with any comments from key officials such as US Trade Representative Robert Lighthizer having the capacity to shake markets. In short, while China has made some concessions in previous rounds – such as proposing plans to eliminate the bilateral trade deficit – there’s reportedly been little progress on key issues like intellectual property protection and forced technology transfer.

While striking an actual deal today seems quite unlikely, any signs the two sides are making headway could still raise hopes for a breakthrough down the road, and perhaps support risky assets like equities and commodity currencies. It will be fascinating to see whether the Trump administration ‘digs in’ and waits for major concessions on the biggest issues, or whether it will settle for a near-term solution that lifts markets and can also be presented as a ‘victory’ ahead of next year’s election campaign.

Outside of the trade talks, the economic calendar is relatively light. The main release will be the Eurozone’s preliminary GDP for Q4. While projections point to an unchanged quarterly rate of growth, considering the sharp drop in the bloc’s PMIs throughout the quarter, the risks surrounding that forecast may well be tilted to the downside. A weaker-than-expected print could cause euro/dollar to give back some of its latest gains.

In China, the official PMIs for January were already released and encouragingly pointed to some stabilization in activity, helping the aussie and the kiwi to climb somewhat alongside most Asian stock indices.

In equities, the earnings season continues with online retail giant Amazon today, which will release its quarterly results after the closing bell on Wall Street.