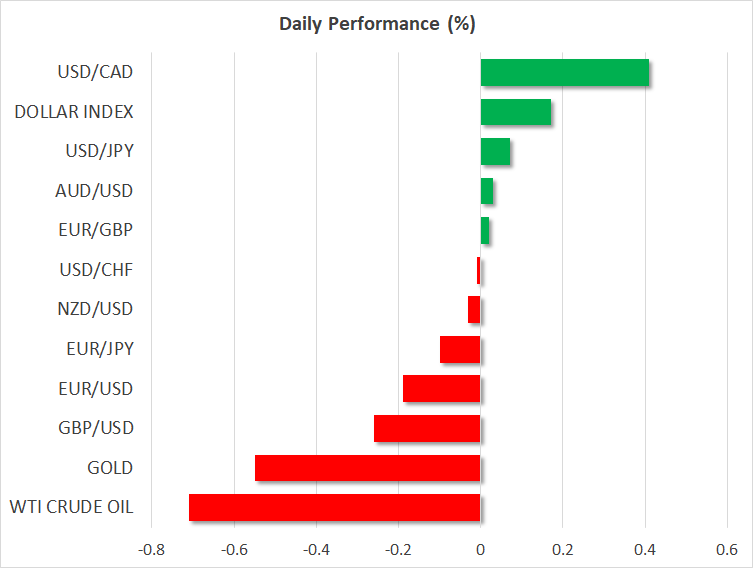 The People’s Bank of China (PBOC) eased its policy over the weekend, cutting the amount that commercial banks have to hold as reserves by 1 percentage point. The move is aimed at freeing up liquidity in the banking system and propping up the economy at a time when the raging trade conflict with the US threatens to slow down growth. Separately, China’s Finance Minister Liu Kun said a few hours later the government is ready to adopt a “more proactive” fiscal policy to “minimize the impact” of trade tensions, effectively hinting at fiscal stimulus in the pipeline too.

Paradoxically, while easier monetary policy and promises of greater fiscal spending are theoretically a tailwind for stocks, Chinese markets plunged when they reopened today after a week of holidays. Specifically, the CSI 300 dropped by 4.30%, with investors seemingly signaling that stimulus alone will be inadequate to shelter the economy in case trade tensions escalate much further. More importantly, the fact China is taking stimulus measures which will take a long time to filter into the real economy was probably seen as another signal the authorities expect the trade battle to be a prolonged one, and possibly worsen even further from here.

In the US, the employment data on Friday were somewhat mixed and hence left the dollar little changed in the aftermath. Nonfarm payrolls disappointed, clocking in at just 134k instead of the anticipated 185k. Average hourly earnings came at 2.8% in yearly terms, as expected, while the unemployment rate declined by more than projected, to 3.7% – a low last seen in 1969. In general, these figures pointed to a vibrant economy, but not one that is “on fire”, as survey-based measures like the ISM PMIs would have led one to believe. The dollar ended Friday’s session lower against most of its major peers, albeit only slightly so.

In the UK, sterling ripped higher after reports the EU is ready to offer Britain an unprecedented “super-charged” free trade agreement in an attempt to wrap up a deal by mid-November. While the offer would fall short of what PM May requested, for instance rejecting “frictionless trade”, it would still be a gigantic leap in the right direction. Optimism surrounding a deal seems to be on the rise, and considering that speculative positioning on the pound is still heavily net-short according to CFTC data, the currency likely has lots of room to run higher in case investors begin to unwind more of their prior short bets.

Barring the Sentix index out of the eurozone, which generally does not act as a major market mover, Monday’s calendar is empty of important releases.

The Sentix index that gauges investors’ sentiment in the eurozone is slated for release at 0830 GMT. The measure is projected to stand at 11.8 in October, its lowest since June. Emerging market angst, worries over political developments in Europe, and trade uncertainty stemming from President Trump’s tariff action acted as a drag on investor morale in the past, and they may well continue doing so moving forward.

Of more importance for the euro’s direction will be any developments in Italy. The country announced its budget plans last week. Worries seem to have eased a bit, though the window remains open for a clash between Italian and EU officials, something which will act as a drag on the common currency.

There have been some positive comments late last week suggesting a Brexit deal could materialize within the next few weeks. It is hoped that a deal could be struck on the major sticking point relating to the Irish border before a relevant summit on October 17. Any headlines pointing to a breakthrough are expected to be met with long sterling positions.

St. Louis Fed President Bullard (non-voting FOMC member in 2018) will be talking on US monetary policy, the interest rate outlook and the wider economic implications of fiscal policy at 0930 GMT.

Elsewhere, US Secretary of State Mike Pompeo visiting China will be generating interest, especially in light of the confrontational rhetoric between the two superpowers heating up recently.

US equity markets will be open today, despite the US bond market being closed for the Columbus Day holiday; stock markets are bracing for earnings season, with Citigroup, JPMorgan Chase and Wells Fargo releasing quarterly results on Friday. 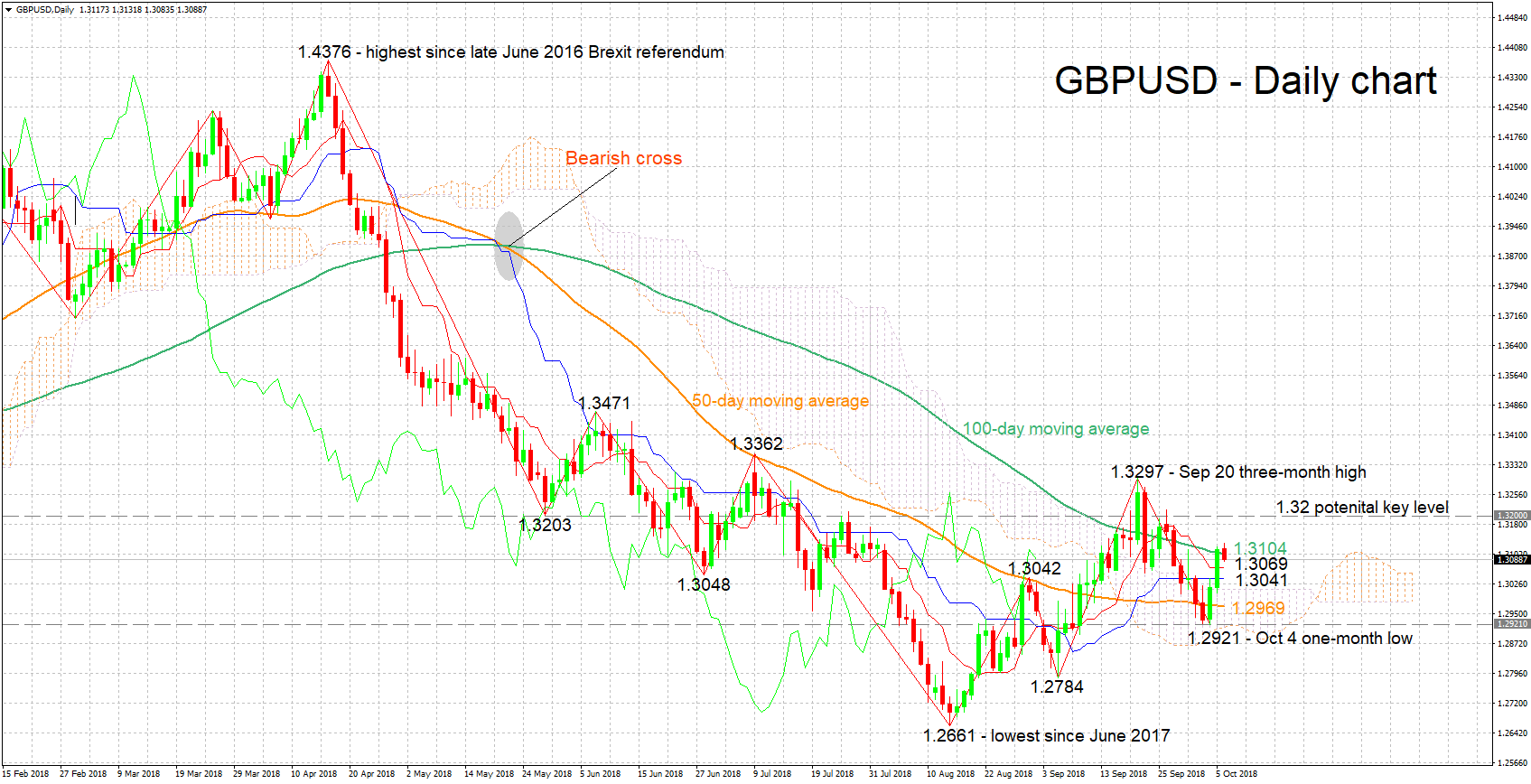 GBPUSD has gained some ground after touching a one-month low of 1.2921 last week. The Tenkan- and Kijun-sen lines are positively aligned though they have both flatlined, overall projecting a mostly neutral picture in the short-term.

Positive momentum for a Brexit deal is expected to boost the pair. Given a move above 1.3104, the current level of the 100-day moving average, resistance may come around the 1.32 handle; the area around this was congested between late June to mid-July. Further above, the three-month high of 1.3297 from September 20 would be eyed.

Conversely, disagreements rendering a no-deal Brexit more likely are anticipated to weigh on GBPUSD. Immediate support to a declining pair could occur around the current levels of the Tenkan- and Kijun-sen lines at 1.3069 and 1.3041 respectively. Not far below lies the Ichimoku cloud top at 1.3011 and then the 50-day MA at 1.2969. Steeper losses would shift the attention to October 4’s one-month low of 1.2921.