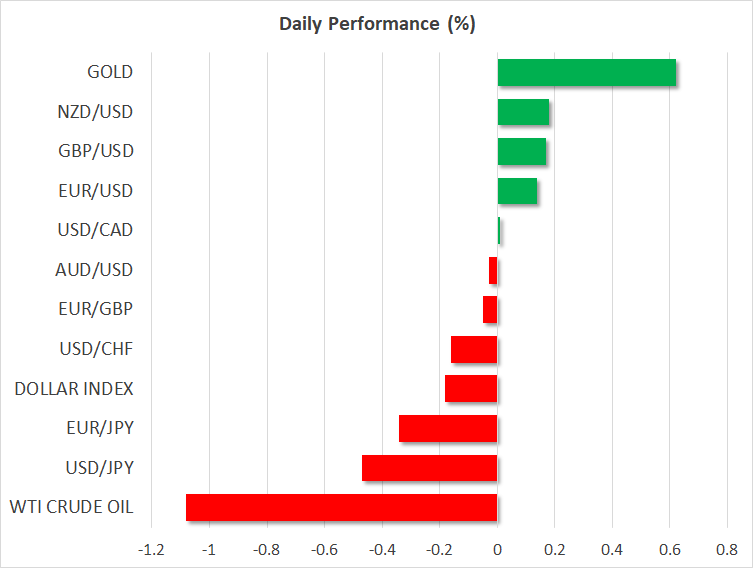 Nonfarm payrolls in the limelight

The spotlight today will be on the US employment report for February. Forecasts are quite optimistic across the board. Nonfarm payrolls (NFP) are expected to have risen by 180k, less than January’s astonishing 304k but still a strong number overall. Meanwhile, the unemployment rate is anticipated to tick down to 3.9%, and earnings are projected to have accelerated further, to 3.3% in yearly terms.

Markets will likely focus mainly on earnings, as the Fed has stressed it wants to see a vigorous pickup in inflation before considering further hikes. On that front, it’s striking that market pricing has once again tilted towards Fed rate cuts this year, even without any negative US news. Hence, today’s data may prove pivotal, as a strong report could extinguish easing speculation and thus boost the dollar further, whereas a disappointment may see rate-cut expectations grow, triggering a correction lower. As for which is more likely, although labor market gauges were inconclusive, do note that given just how optimistic the forecasts already are, it would take a truly spectacular set of data to trigger further gains in the dollar.

Euro collapses as Draghi pulls another rabbit out of the hat

The ECB meeting was not short of fireworks, with policymakers delivering easing measures over and above what markets anticipated. Firstly, the Bank slashed its economic forecasts dramatically, and for a second time in less than three months. More importantly, Draghi not only announced a new round of cheap loans for commercial banks, but also pushed back the timing of the first rate hike. Rates will now stay unchanged ‘at least’ until the end of 2019, from ‘at least through the summer’ previously. In fact, the ECB chief said they debated pushing this timing even further back, to March next year. Euro/dollar plunged by more than one big figure, touching lows last seen in mid-2017.

Where does this leave the euro? Admittedly, things aren’t looking bright, as the ECB’s dovish tilt opens the door for more near-term downside, and suggests that any meaningful rebound will probably take much longer to materialize. That said, any massive weakness from current levels – for example euro/dollar below 1.10 – seems unlikely too. The ECB was already as dovish as it could possibly be at this stage, and in truth, there isn’t much left in the rates market to price out. Put differently, most of the ‘bad news’ may be baked into the battered euro already.

The picture wasn’t pretty in the broader market either, with US stock indices falling notably. Ominously, the benchmark S&P 500 (-0.81%) crossed back below its 200-day moving average and is also expected to open lower today according to futures. Markets in Asia were a sea of red today as well, with Japan’s Nikkei 225 (-2.01%) and China’s Shanghai Composite (-4.40%) nosediving. Accordingly, the star performer in the FX market today is the defensive Japanese yen.

The catalyst for the latest wave of risk aversion seems to have been China’s trade data for February that were released overnight. Exports collapsed by much more than expected in yearly terms, likely reigniting some concerns around the health of the global economy.

Besides the US jobs data, Canadian employment figures for February will also hit the markets today.

In the UK, any Brexit headlines may attract attention ahead of the crucial votes in Parliament next week. The pound dropped yesterday, partly in sympathy to the euro and partly due to reports that after all these negotiations, the EU will only offer the UK non-legally binding compromises on the Irish backstop, which likely won’t be enough to satisfy UK lawmakers. 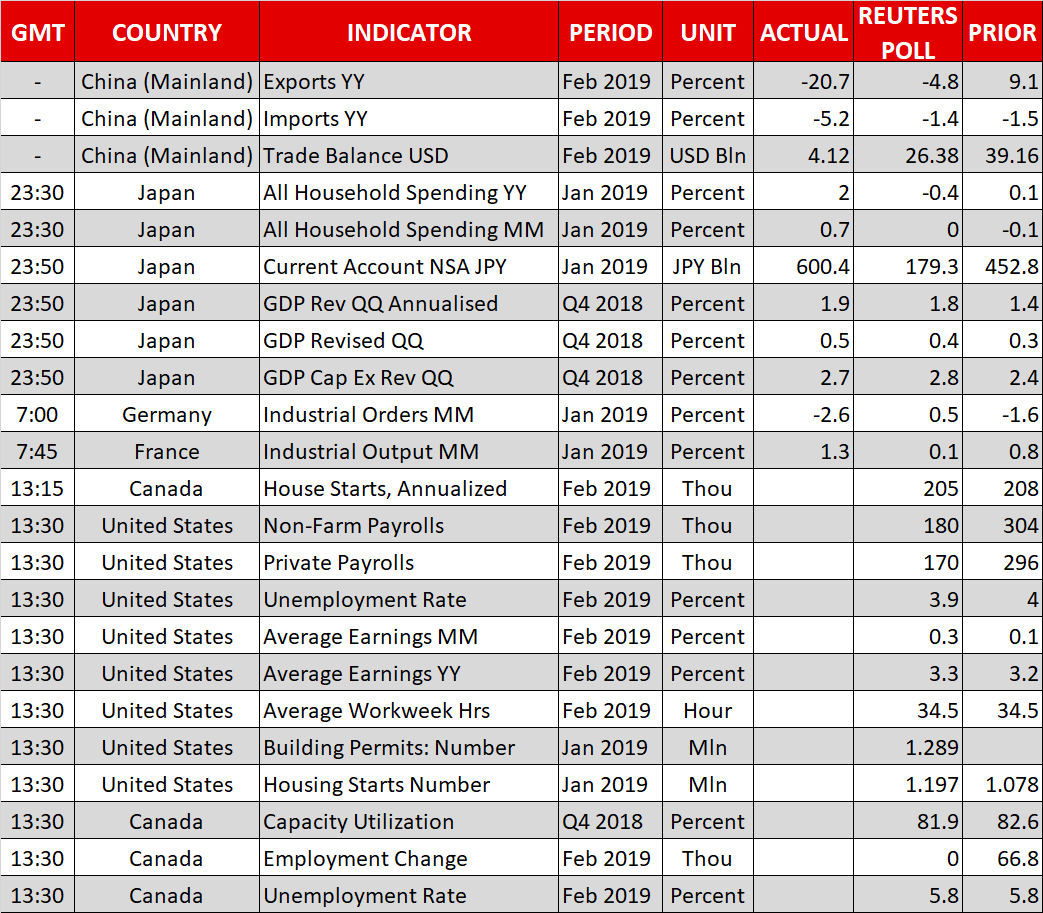