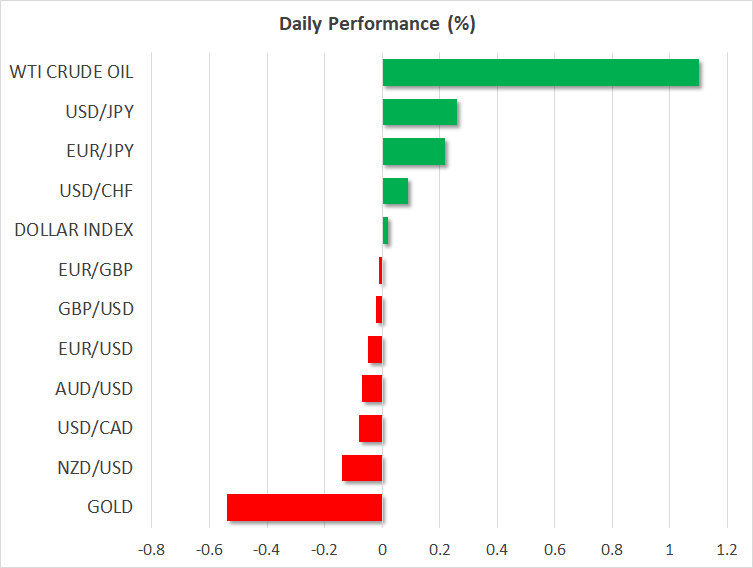 The stock market selloff continued yesterday, with all major US indices edging lower, albeit to a lesser extent than in the previous session. The fact that this rout occurred just ahead of the earnings season in the US may also be a taste of markets being jittery around the results or the guidance firms will give, leading investors to limit their exposure beforehand. Disappointing US inflation data yesterday coupled with reports that the US and Chinese Presidents plan to meet towards the end of November likely helped to calm some nerves around yields and the trade conflict respectively, limiting any greater losses in stocks.

In a positive sign for the bulls, sentiment seems to have turned around during the Asian session on Friday, with most markets closing in the green. Additionally, futures tracking the US indices are also pointing to a material rebound today, which in the case of the Nasdaq would eclipse yesterday’s losses. One major factor providing comfort is probably the pullback in US bond yields. This can be seen as a self-correcting mechanism, where stocks begin to selloff as bond yields rise, leading investors to shift back to bonds amid the risk-averse environment, hence driving yields back down and calming the stock market.

Accordingly, the dollar was the worst performer in the currency market on Thursday, surrendering ground across the board as the pullback in US yields stole some of the currency’s shine. The euro capitalized on the dollar’s softness, advancing against all the majors besides the antipodeans – aussie and kiwi – both of which bounced sharply off 2 ½ year lows. Perhaps most striking was the yen, which pulled back against both the euro and pound despite the risk-off tones on Thursday. The Japanese currency is also weaker today, as the about-turn in risk sentiment seems to have taken the wind of the safe-haven’s sails.

Friday’s calendar is relatively light, with the University of Michigan’s (U of M) consumer sentiment survey attracting interest and eurozone industrial production data also due out.

At 0900 GMT, eurozone industrial production figures for August will be made public. Month-on-month, production is anticipated to rise by 0.4%, partly rebounding from a 0.8% contraction in the two preceding months. Still, if actual results match estimates, the annual rate of growth in output would remain in negative territory during August.

Despite the euro extending its recovery from its lowest in around two months of 1.1429 hit on Tuesday, touching an 11-day high of 1.1610 earlier on Friday, its rebound may prove short-lived as worries over Italian and EU officials clashing over Italy’s spending plans remain firmly on the table. Also relating to this, credit ratings agency Fitch warned that it sees considerable risks to Italy’s new fiscal targets, especially beyond 2019.

The most important release on the US calendar is the U of M preliminary survey on October consumer sentiment. The relevant index measuring consumer morale is projected to slightly improve relative to September, and at 100.4 stand at its highest since March. The survey’s sub-indices gauging inflation expectations tends to be watched by markets. In this instance, they may attract additional attention in the aftermath of yesterday’s weaker-than-anticipated CPI readings out of the US.

Also due out of the US are data on September’s import and export prices (1230 GMT).

In terms of policymakers’ appearances, regional Fed Presidents Evans (non-voting FOMC member in 2018 – 1330 GMT) and Bostic (voter – 1545 GMT) are on the agenda. Bank of England chief economist Haldane will also be talking at 1400 GMT, though the topic of discussion renders any comments on monetary policy unlikely.

Elsewhere, the IMF and World Bank will hold meetings in Bali starting today; influential policymakers including the ECB’s chief Draghi will be attending.

In energy markets, Baker Hughes data on active oil rigs in the US are scheduled for release at 1700 GMT.

In equities, JPMorgan Chase, Citigroup and Wells Fargo will be kicking off earnings season for big US banks. All three will be releasing their results before the US equity market open. Still, trade and yield angst remain at play and could divert attention out of corporate releases. Treasury yields did ease from cycle highs, though they still remain at relatively elevated levels. On Sino-US tensions, officials made reference to plans for a Trump-Xi Jinping meeting in November. 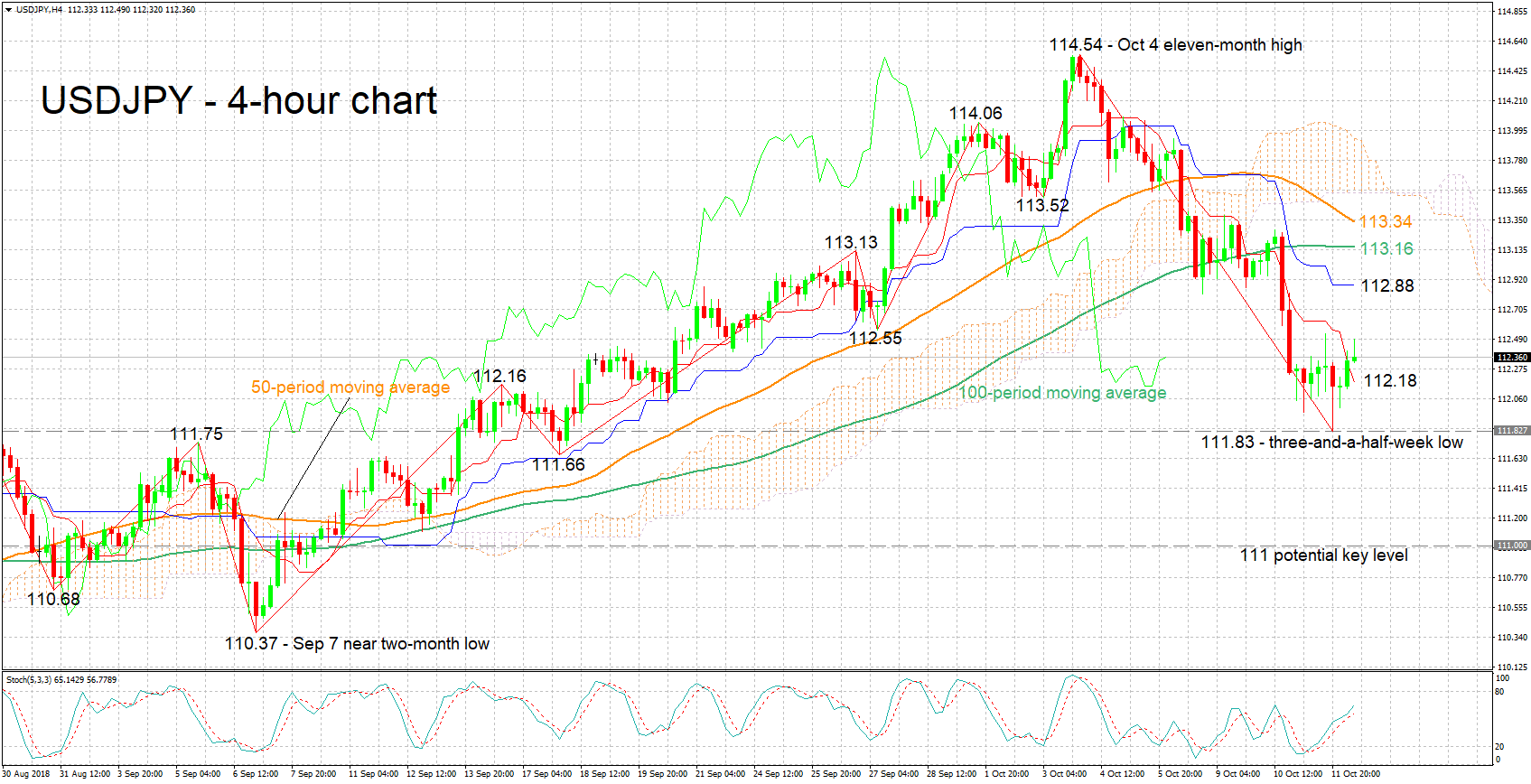 USDJPY posted considerable losses after reaching an 11-month high of 114.54 last week, eventually hitting a three-and-a-half-week low of 111.83 on Thursday. The negatively aligned Tenkan- and Kijun-sen lines are acting as a testament to the bearish short-term bias that is in place. However, the Kijun-sen halting its decline is a sign negative momentum is easing. Moreover, the stochastics are giving a bullish signal in the very short-term: the %K line is above the slow %D one and both are heading higher.

A strong U of M survey, especially as regards inflation expectations that may stoke market-implied odds for a fourth 25bps Fed hike in 2018, are likely to lift the pair. The zone around 112.88 and 113.34 includes the Kijun-sen, as well as the 50- and 100-period moving average lines, and may act as resistance to gains.

On the downside and in case of disappointing US figures, immediate support could come around the Tenkan-sen at 112.18; not far below lies yesterday’s low of 111.83. Lower still, support may take place around the 111 round figure; the region around this was congested in previous weeks.

Safe-haven flows (for example in the event the equity rout extends) or the lack thereof, can also affect the pair.