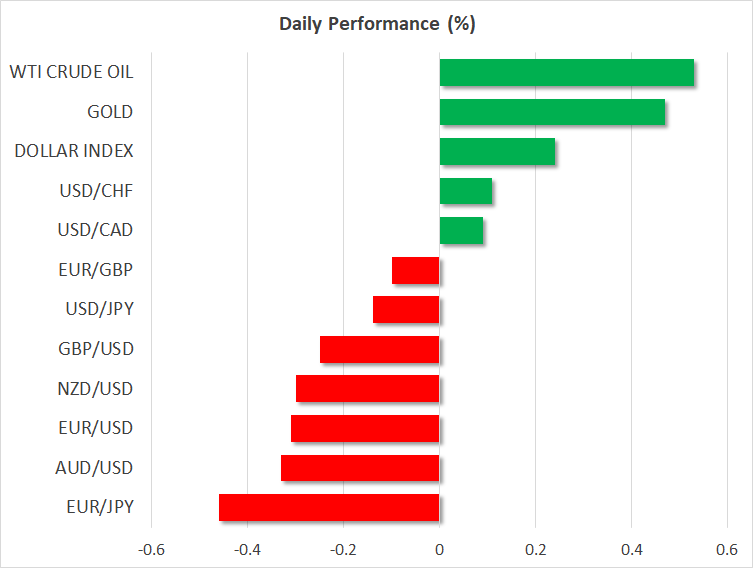 The loonie continued to march higher on Monday, touching a fresh four-month high against its US counterpart after news that the US and Canada reached an “eleventh hour” trade deal to replace NAFTA on Sunday, ending months of impasse. The new accord – now called USMCA – will maintain NAFTA’s trilateral nature and will also retain the Chapter 19 dispute settlement mechanism that Canada had been fighting to preserve. The news likely lifted a cloud of uncertainty that was hanging over the Canadian economy, by extent clearing the way for the BoC to raise rates with one less worry moving forward. The market-implied probability for a rate increase at the upcoming October 24 meeting is currently 76% according to Canada’s OIS, and to the extent that it approaches 100% as we draw closer to that date, the loonie could extend its recent gains.

In Europe, all eyes remained on the drama surrounding the Italian budget, following media reports that the EU will reject Italy’s budget proposal. Separately, the Italian government seems adamant about not changing its 2.4% deficit target, which suggests the long-feared showdown with the EU may well play out in the coming weeks. The euro remains on the back foot in the midst of this, surrendering ground across the board amid an exodus of capital from Italian bond markets recently. From the euro’s perspective, in the near term a lot will likely be decided by whether the 1.1500 level in euro/dollar holds as a defensive “line in the sand”, or not.

In the UK, the pound spiked higher after reports that PM May plans to make concessions to break the deadlock in the Brexit negotiations. Reportedly, the UK is prepared to allow new checks on goods moving between the British mainland and Ireland, but in exchange wants the EU to compromise and keep the entire UK in the bloc’s customs union, temporarily. In essence, this would effectively curb the UK’s ability to strike free trade deals with other nations moving forward, which was ironically a cornerstone of the Brexit campaign. Overall, both sides seem increasingly keen to strike a compromise, and any further signs of concessions over the coming weeks will be well-received by the pound.

Tuesday’s calendar is relatively light, with UK construction PMI, eurozone producer prices and US total vehicle sales being on the agenda. Elsewhere, the situation relating to Italy’s budget which could lead to a clash with the European Commission over the country’s spending plans will be monitored, while updates on Brexit may emerge as well.

UK construction PMI data for September will be made public at 0830 GMT. The measure is anticipated to fall to 52.5, matching a low last experienced in May and April of the current year; a reading above 50 denotes sectoral expansion. The PMI print for the all-important services sector will follow on Wednesday.

But of most importance for sterling will likely prove any Brexit developments. In this respect, Bloomberg reported yesterday that PM Theresa May will outline new Brexit plans to help the negotiations to move forward. On Wednesday, she will be talking at the Conservative Party Conference in Birmingham.

Eurozone producer prices for August are due at 0900 GMT. The monthly pace of growth in prices is projected to ease to 0.2% from July’s 0.4%, which would put the annual rate of growth at 3.9%, from July’s 4.0%. However, instrumental for the euro’s direction, at least in the short-term, will be developments having to do with the Italian budget. Italian Deputy Prime Minister Luigi Di Maio accused EU officials of spreading negative comments about the nation’s spending plans and in doing so causing financial market unrest. The higher the odds for an Italy-EU clash, the greater the drag is likely to be on the euro.

September’s total vehicle sales out of the US are forecast to have slightly increased compared to August, when they stood at their lowest in a year. The figures are scheduled to hit the markets at 1930 GMT.

The outcome of today’s bi-weekly milk auction may move the New Zealand dollar, given that dairy products are the nation’s largest goods export earner; higher prices are generally seen as kiwi-positive. The data lack a specific time of release.

Meanwhile, the Chinese navy dispelling an American missile destroyer from waters near South China Sea islands is another sign that Sino-US tensions may be moving in directions other than trade; the situation will be closely watched.

In energy markets, weekly API data on US crude stocks are due at 2030 GMT. 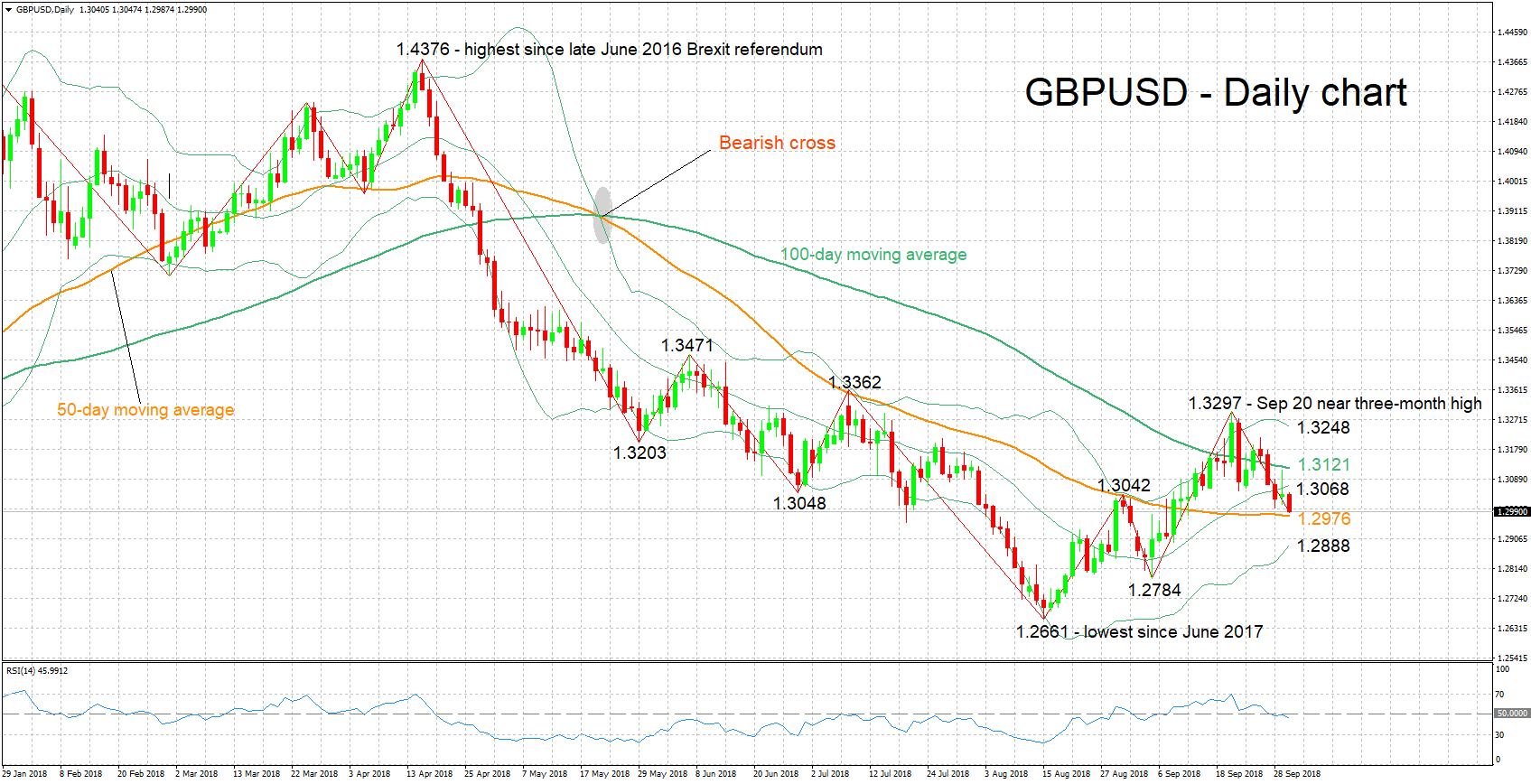 GBPUSD fell to three-week low of 1.2987 earlier on Tuesday, while it is currently trading in proximity to this trough. The RSI continues to head lower, projecting a negative short-term picture.

A Brexit plan by PM May that removes the deadlock in negotiations is expected to lead to a rising GBPUSD. Resistance to advances may first take place around the middle Bollinger line – a 20-day moving average line – at 1.3068 and the 100-day MA at 1.3121. Further above, the zone around the upper Bollinger band at 1.3248 and the near three-month high of 1.3297 from late September would be increasingly eyed.

On the downside and in case a no-deal Brexit receives steam, immediate support could occur around the 50-day MA 1.2976. Further below, the focus would turn to the lower Bollinger band at 1.2888. In case of steeper declines, the attention would shift to 1.2784, this being a previous low.