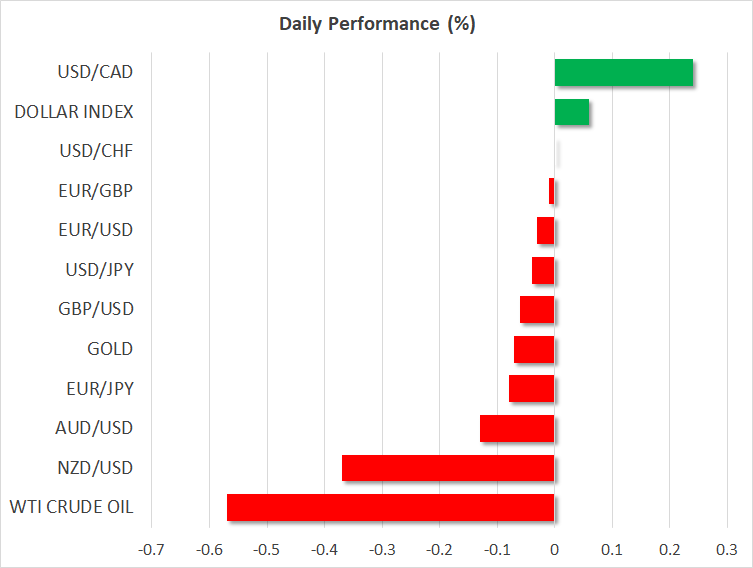 The spotlight will fall on the Bank of England (BoE) today, which is expected to keep its policy unchanged via a unanimous vote at 12:00 GMT. Updated economic forecasts and a press conference by Governor Carney will follow. The UK economy is currently going through a soft patch as evidenced by the drop in the nation’s PMIs, with much of the weakness owed to Brexit uncertainties holding back investment. Combining this slowdown in growth with the fact that there are now less than two months before the UK exits the EU without an accord in place yet, it’s safe to say the BoE will refrain from appearing hawkish.

Instead, Carney & Co. could adopt a more cautious tone, highlighting that the slowdown suggests a diminished need for any future hikes, while also stressing that a no-deal Brexit scenario may see the Bank Rate being cut. There’s little incentive for the BoE to amplify expectations for a future hike, only to risk having to walk back on that in a few weeks’ time in case of a disorderly Brexit. Money markets still assign a ~55% probability for a quarter-point rate hike this year, so if the BoE indeed downplays the prospect of a hike or emphasizes that the odds for a cut have risen, then the pound could slide.

In the political arena, PM May will meet EU chief Juncker in hopes of reopening negotiations on the Irish backstop. However, considering recent remarks from various EU officials lately, one shouldn’t hold their breath for a breakthrough, which further tilts the risks surrounding sterling to the downside in the immediate term.

The New Zealand dollar plunged overnight, closing the session down by more than one big figure against the greenback, after the nation’s employment data for Q4 disappointed. The unemployment rate rose by more than expected while the labor force participation rate fell, signaling weak jobs growth overall. Markets took this as a signal that the RBNZ will most likely follow in the RBA’s footsteps and hint at a rate cut when it meets next week.

A quarter-point RBNZ cut by the end of the year is now priced in with a ~65% probability. Mounting expectations for a dovish tone by policymakers could keep the kiwi under pressure heading into next week’s meeting, especially considering the absence of any tier-one economic data until then.

The US dollar outperformed on Wednesday, recording a fifth consecutive day of gains against a basket of six major currencies, without any US-specific catalyst driving the move. Instead, the world’s reserve currency seems to be exploiting weakness in other G10 peers, most notably in the pound, euro, loonie, aussie, and kiwi lately. Some remarks by Fed Chair Powell overnight didn’t provide any new information and hence, the market reaction was muted. Today, attention turns to remarks by Fed Vice Chair Richard Clarida (14:30 GMT), and Dallas Fed President Kaplan (14:15 GMT).

In equity markets, the major US indices struggled and ultimately closed with marginal losses, with disappointing earnings by video game makers such as Electronic Arts (-13.3%) and Take-Two Interactive (-13.76%) contributing to the weakness. The earnings season continues today with Twitter, which will release its results before the US market open.