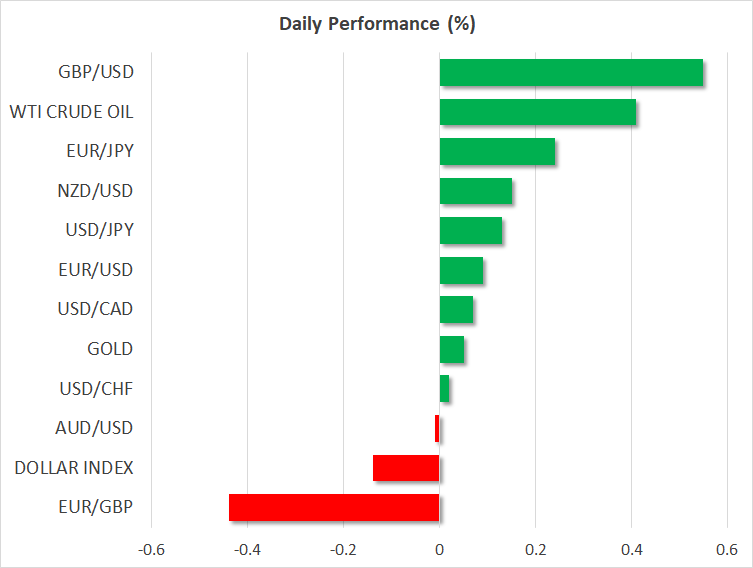 Sterling back above $1.32 on hopes May can win MPs backing with revised deal

The British pound was the star performer for a second day on Tuesday as UK prime minister, Theresa May, managed to win legally binding assurances from the European Union that the Irish backstop would be temporary. There were doubts, however, about whether the changes would be enough to convince rebel Conservative MPs to back May’s deal as it was unclear how easy it would be for the UK to pull out of the backstop unilaterally, despite May’s assurances.

This puts the focus on the UK attorney general’s legal advice on the updated deal, which will be published before the vote. If the small Northern Irish party, the DUP, who are propping up May’s minority government, decide to back the deal, then it’s quite likely eurosceptic Conservatives will also vote in favour of the deal. Lawmakers are expected to vote on the deal later today around 1900 GMT.

The euro fared slightly better versus the greenback, benefiting from the upbeat Brexit headlines as well as from the improved risk sentiment, even though the near-term outlook for the Eurozone economy remains negative.

Yen pulls back, stocks rally as markets in risk-on mode

The safe-haven yen was broadly weaker on Tuesday as markets turned buoyant from the positive developments in the Brexit process and US-China trade discussions. Talks between the two countries are continuing, with Chinese Vice Premier Liu He reportedly agreeing with US Trade Representative Robert Lighthizer and Treasury Secretary Steven Mnuchin on the next steps in the negotiations.

The yen was down the most versus the pound but was only marginally lower against the dollar, at 111.37 yen per dollar. Those gains weren’t enough to push the dollar index to positive territory given the significant losses against the pound and the euro, with the index last trading 0.2% lower at 96.99.

Also contributing to the risk-on mood was a pledge by China’s central bank over the weekend to further boost lending and reduce borrowing costs. Chinese stocks closed sharply higher for a second straight day, while the major European indices opened in the green. US e-mini futures pointed to a positive start for Tuesday following strong gains overnight on Wall Street.

UK GDP and US inflation data coming up

The pound may get a further boost from a slew of releases out of the UK at 0930 GMT, including monthly GDP growth. The British economy likely returned to growth in January after an unexpected contraction in December. However, a negative surprise would probably have little impact on sterling if British MP’s approve May’s revised deal.

In the US, investors will be watching the latest inflation numbers at 1230 GMT. The consumer price index is expected to have held steady at a muted 1.6% year-on-year in February, which would underscore the Fed’s wait-and-see approach.