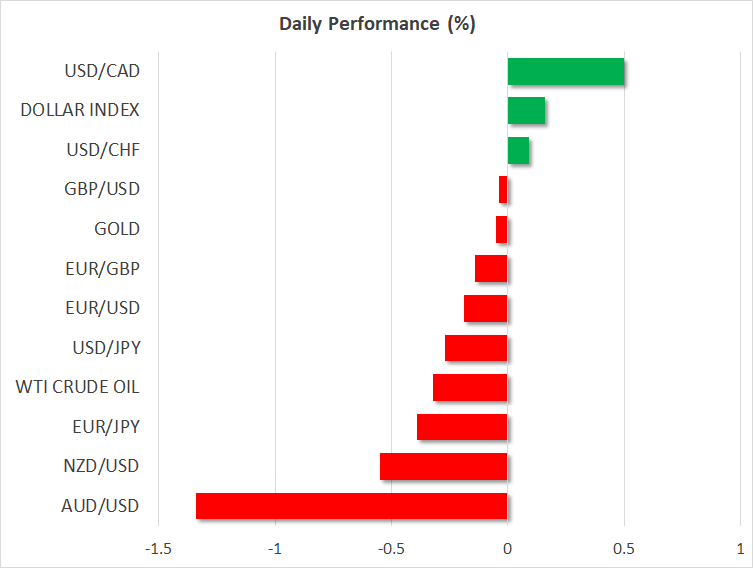 The Australian dollar is in freefall early on Wednesday, losing more than a cent against its US counterpart, following some cautious-sounding remarks from RBA Governor Philip Lowe earlier. He backpedaled on some of the Bank’s prior rhetoric that the next move in interest rates will likely be higher, indicating instead that the probabilities for the next rate move now appear “more evenly balanced”. He also mentioned that lower rates may be appropriate if the economy stalls, and that such an outcome would weaken the aussie.

Markets were likely caught off-guard by his cautious rhetoric, considering that just a day earlier, there were no signs the RBA is even contemplating a rate cut in the statement accompanying its policy decision. Consequently, the implied probability for a quarter-point rate cut by October soared to 68% from just 35% yesterday, according to pricing derived from Australia’s overnight index swaps. The next market mover for the aussie will likely be the Statement on Monetary Policy due on Friday, which will include updated forecasts for the Australian economy, and may thus provide some insights on the actual likelihood for a rate cut going forward.

Sterling crumbles under the weight of worrisome data

The British pound was the worst performer in the G10 FX space on Tuesday, after the nation’s services PMI fell by more than expected, amplifying concerns that economic growth continues to wane as Brexit uncertainties sap business confidence. The stark weakness in all three PMIs suggests the BoE may well strike a concerned tone when it meets tomorrow, as the whole premise of future rate hikes comes under question amid a weakening economy, Brexit or not.

Turning to politics, PM May will meet EU Commission chief Juncker on Thursday in an attempt to reopen negotiations on the Irish backstop, something the bloc has refused repeatedly. The UK wants the backstop to have a time limit, or something similar, which the EU is highly unlikely to agree to. This implies there probably won’t be any meaningful progress by next Thursday, when the UK Parliament votes again, thereby keeping the risks surrounding the pound tilted to the downside until then. After that though, it will either be an explosion higher for sterling as Parliament either i) accepts the deal ii) extends the leave date iii) calls for a second referendum – or a massive drop lower as none of these happens and the probability of a no-deal exit soars.

US stock markets continued their steady climb yesterday, with the Nasdaq Composite (+0.74%) leading the charge. Meanwhile, Boeing’s high-and-rising stock (+3.32%) touched a fresh all-time high, helping the Dow Jones (+0.68%), a price-weighted index, to outperform the benchmark S&P 500 (+0.47%). There was little in the way of fresh news behind the moves, with President Trump’s subsequent State of the Union address not providing anything of real substance for markets either.

In the US, the trade deficit for November will finally be released; it was delayed owing to the government shutdown.

In New Zealand, employment data for Q4 are due. Markets continue to price in greater odds for an RBNZ rate cut rather than a hike this year, so these may be crucial for the kiwi. The results of the bi-weekly milk auction will also be released.

During the early Asian session on Thursday, Fed Chairman Powell (0000 GMT) and the Fed Board Governor Quarles (Wednesday, 2305 GMT) will both deliver remarks.