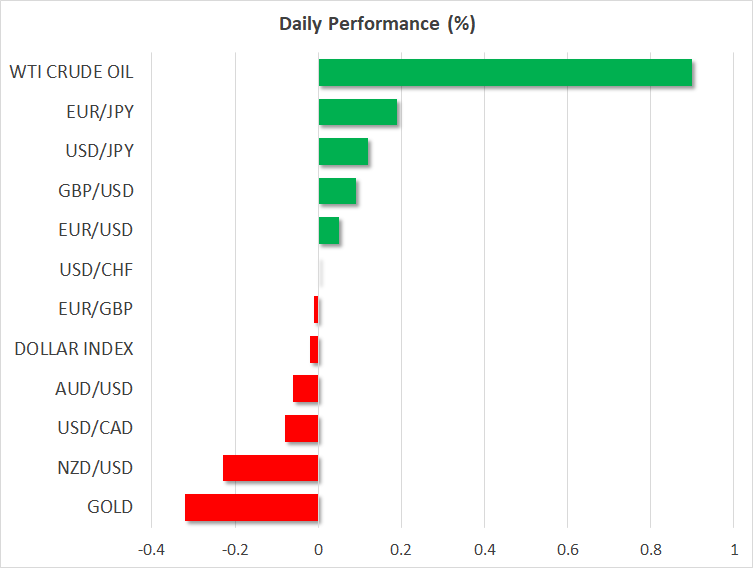 The US dollar continued to edge higher on Tuesday, lifted by recovering Treasury yields as demand for safe-haven government bonds ebbed after President Trump struck a deal with Mexico over illegal migrants and suspended punitive tariffs. The greenback was slightly higher at 108.58 yen as the Japanese currency was broadly weaker on the back of the improving risk sentiment.

Stocks also extended gains, with the S&P500 closing higher for a fifth consecutive session, while major indices in China surged between 2.5-3.0% after the Chinese government announced measures for local authorities that would boost funding for infrastructure projects.

However, with the trade dispute with China still unresolved, gains for risk assets were limited. President Trump yesterday repeated his warning that additional tariffs could be slapped on Chinese imports if no progress is made between himself and his Chinese counterpart, President Xi, at the G20 summit in Japan on June 28-29.

China has yet to confirm a meeting between the two presidents even though Trump told reporters yesterday that they “are scheduled to talk and to meet”. This raises questions about whether such a meeting will go ahead and will likely keep investors nervous until there is more clarity on what the agenda is for the G20 summit.

If the meeting is called off, it would confirm fears that the US-China trade war is set to be a very protracted one and would raise even more pressure on the Federal Reserve to cut rates.

US inflation data in focus

Soaring expectations that the Fed will be forced to cut rates as early as the July policy meeting have eroded the dollar’s safe-haven appeal. But there could be some boost for the greenback if the US data due this week contradict the picture from last week’s NFP report of a slowing economy.

Producer prices for May will be released later today, followed by the consumer price index tomorrow and retail sales on Friday.

With no Fed officials on the calendar this week due to the blackout period ahead of next week’s FOMC meeting, there’s likely to be some caution to the data as investors await the Fed’s updated dot plot chart on their predicted rate path.

The pound fell sharply on Monday after UK GDP contracted much more than expected in April, led by a slump in car production, which has been hit hard by the Brexit turmoil. The data increased the prospect that the economy could shrink in the second quarter and further diminished the odds that the Bank of England would raise interest rates over the next 12 months. In fact, futures markets are now pricing a small cut in UK rates during this period.

Nonetheless, the Bank of England is maintaining its tightening bias. Board Member Michael Saunders was the second BoE policymaker in as many days to hint that some tightening in policy might be required over the coming year.

His comments weren’t of much comfort to the pound, however, which slipped below the $1.27 level to a near one-week low and was struggling to reclaim the handle today.

The euro fared slightly better, bouncing back sharply from yesterday’s lows to recover to around $1.1320 today. The single currency came under pressure on Monday on reports the ECB is more open to cutting rates than it previously indicated. But there was some support for the euro from news that Italy’s government is preparing an action plan that would help it escape EU disciplinary action.