European Open Preview – Sterling gaps down as Brexit talks are “paused”; US retail sales due 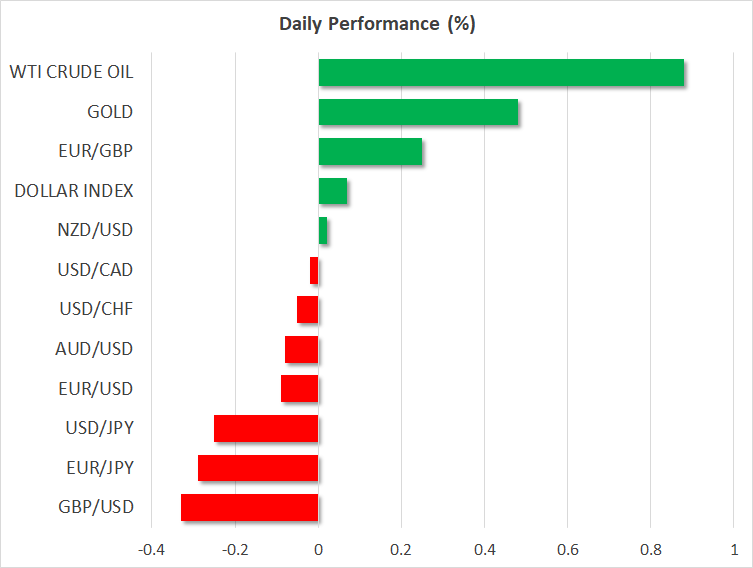 The British pound opened with a gap lower this week, in the wake of news that the Brexit talks have been “paused” until Wednesday’s EU summit. The reports suggest intense negotiations through the weekend failed to bear fruit, and were called off on Sunday amid a lack of progress on the Irish border issue. This likely poured cold water on any expectations that a deal may be wrapped up as early as this week. It also implies the proverbial can has now been kicked down the road to November, when the EU may call a special summit to discuss Brexit, provided enough headway has been made until then. As for the pound, it will probably remain hostage to incoming headlines, with price action potentially staying choppy and directionless until there is some further clarity on the issue.

In the broader market, US stocks rebounded on Friday in the absence of any major fresh catalyst, as the earnings season kicked off. Encouraging results from banking heavyweights such as JP Morgan and Citigroup may have helped support risk appetite a little, on speculation for another blockbuster earnings season. That said though, it appears this was merely a brief reprieve, as the optimism failed to spill over into Asia on Monday, and futures tracking the major US indices are pointing to a lower open today as well.

The fact that risk sentiment is not out of the woods yet may be (at least partly) owed to an escalating diplomatic rift between the US and Saudi Arabia over the weekend. Tensions flared up after the disappearance of a Washington Post journalist from Saudi Arabia’s consulate in Turkey, with President Trump threatening “very powerful” sanctions. The Kingdom replied it would hit back with countermeasures, which may include lowering its oil production to push prices higher, stop buying weapons from the US, and curtailing investments in the US. Oil prices opened higher on the news, while the safe-haven Japanese yen is the best performer among the major currencies, with investors evidently curtailing their risk-taking.

Elsewhere, after flying under the radar over the past few days, market attention could turn back to the Italian budget crisis this week, as today marks the deadline for the highly-controversial budget to be presented to the EU Commission for approval. The EU is nearly certain to reject the budget in its current form, and the tone of the accompanying remarks may be seen as a gauge of whether this will morph into a full-fledged political standoff. The euro will likely move accordingly, lower on signs of further conflict, or higher on anything pointing to a middle-of-the-road compromise.

Day ahead: US retail sales in focus; Brexit updates eyed

US retail sales due at 1230 GMT are the highlight on Monday’s economic calendar.

US retail sales for September are anticipated to have grown by 0.6% m/m, faster than August’s 0.1%. Additionally, core retail sales, this being the measure of sales that excludes automobiles and which more closely aligns with the consumer spending component of GDP, is projected to grow by 0.4% m/m, above August’s 0.3%. A beat in the numbers has the capacity to stoke expectations for a December 25bps hike by the US central bank (78% probability at the moment according to Fed fund futures), something which is theoretically dollar-positive. The opposite holds true as well.

Meanwhile, the New York Fed manufacturing index for October and numbers on September’s retail control are also due at 1230 GMT, while data on business inventories will follow out of the world’s largest economy at 1400 GMT.

Elsewhere, Brexit developments are anticipated to remain the main sterling driver. Weekend talks failed to provide a breakthrough, weighing on the pound. The EU heads of government summit on October 17-18 is expected to touch on pending issues, most notably the Irish border one, with Brexit headlines possibly hitting the markets even before that.

In equities, Bank of America will be releasing quarterly results before the US market open. The fact Friday’s rebound in stock markets received no traction in Asia today, is an indication that investors remain wary on factors such as trade and rising yields. 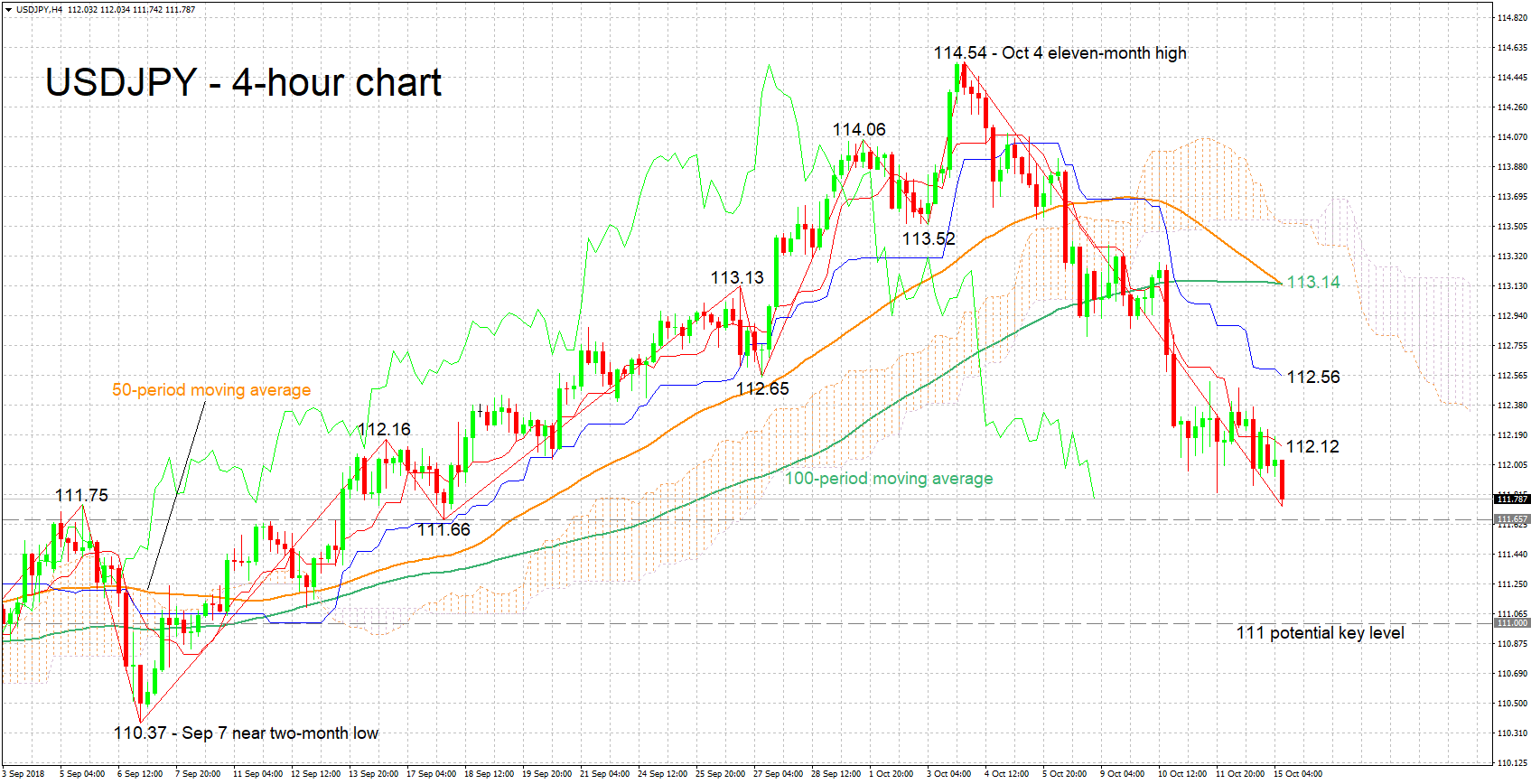 USDJPY is extending its move lower after it hit an 11-month peak of 114.54 on October 4. Earlier on Monday, it touched a four-week low of 111.74. The Tenkan- and Kijun-sen lines are negatively aligned in support of a negative bias in the short-term. The Chikou Span though may be signaling a market that is close to oversold.

Upbeat US retail sales may allow the pair to rebound. Immediate resistance to gains could come around the Tenkan-sen at 112.12, with the Kijun-sen lying not far above at 112.56. Higher still, the focus would turn to 113.14, where the 50- and 100-period moving average lines have converged; notice that the two look set to post a bearish cross.

Conversely, USDJPY is likely to extend its move lower on the back of disappointing US figures. A first line of support may take place around 111.66, this being a previous low. Further below, the 111 round figure could provide additional support, with the focus turning to early September’s near two-month low of 110.37 in the event of steeper losses.

US equity market losses triggering a flight to safety will also probably benefit the yen.