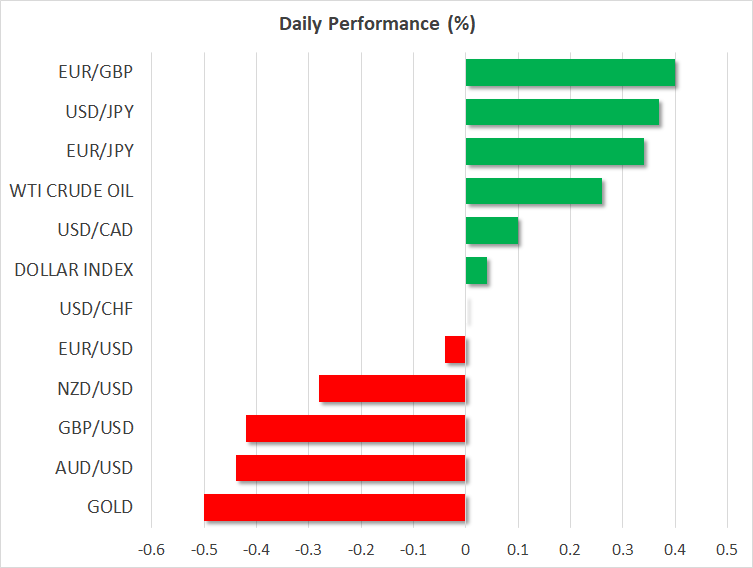 The British currency jumped to a 9-month peak of $1.3383 on Wednesday after the UK Parliament voted against leaving the European Union without a deal. However, the pound turned lower on Thursday, easing to around $1.33, on profit taking but as well as on doubts about whether the vote can actually prevent a disorderly Brexit.

Wednesday proved another disastrous day for Prime Minister Theresa May after lawmakers rejected her motion of ruling out a no-deal scenario for the March 29 exit date and amended it to apply to all circumstances and not just the immediate deadline. In a further blow for the prime minister, some of her cabinet members backed the amendment, undermining her authority.

But despite Parliament’s strong opposition to a no-deal Brexit, the vote is not legally binding, and the UK could still crash out of the EU if no deal is ratified. Avoiding a crash exit also depends on the EU approving any extension to Article 50 even if MPs at Westminster vote in favour of a delay later today as expected.

The vote on pushing back the exit date is scheduled for around 1900 GMT and the motion to be likely put forward by the PM will be for a three-month extension if her deal is approved by March 20. But if no deal has been passed by March 20, the terms of the extension could be set by the EU, and this could involve a much longer delay.

May is still hoping that the Brexiteers within her party as well as Northern Ireland’s DUP party can still be swayed in supporting her deal in a third meaningful vote if there’s a threat of a long extension or a softer Brexit.

As the euphoria over UK lawmakers’ decision to block a no-deal outcome receded somewhat, investors also had to digest a mixed set of economic indicators out of China. Industrial production grew by 5.3% year-on-year in January and February – the slowest rate in 17 years. The data highlighted the continued loss of momentum in the world’s second largest economy, keeping worries about a global downturn alive. But other data showed some signs of stabilization. Retail sales slightly beat estimates, rising by 8.2% y/y, while investment in urban areas quickened marginally to 6.1% y/y in the year-to-date.

Reaction in equity markets was muted with Asian indices ending the day mixed as hopes that the recently announced stimulus measures by Chinese authorities would soon kick in limited the losses. European bourses also shrugged off the data as the no-deal vote in the UK lifted sentiment in the region.

However, in forex markets, the Australian and New Zealand dollars struggled and the two currencies were underperforming on Thursday. Falling government bond yields weighed on the aussie and kiwi, which were last down by 0.4% and 0.3% at $0.7066 and $0.6834, respectively. Slowing growth in China – a big export market for Australia and New Zealand – has led investors to increasingly price in a rate cut by the respective central banks later this year and today’s releases out of China further underscore this view.

Adding to Thursday’s slight risk-off mood were comments by the US President, Donald Trump, on Wednesday on the likelihood of a quick trade deal with China. While Trump thought the talks were “going along very well” he also said “I’m in no rush. I want the deal to be right”, putting into question the prospect of a deal by the end of March.

There was little reaction to the dollar, however, to Trump’s remarks, as the US currency got a boost yesterday from unexpectedly strong durable goods orders for January. The greenback hit a one-week high of 111.70 yen earlier today amid broader yen weakness. The euro meanwhile managed to hold on to yesterday’s gains and was last trading flat at $1.1323.

In commodities, tightening supply drove oil prices to fresh 2019 highs, with WTI crude climbing to a 4-month top of $58.67 a barrel. This lifted the Canadian dollar to a 10-day high of C$1.3283 per US dollar.