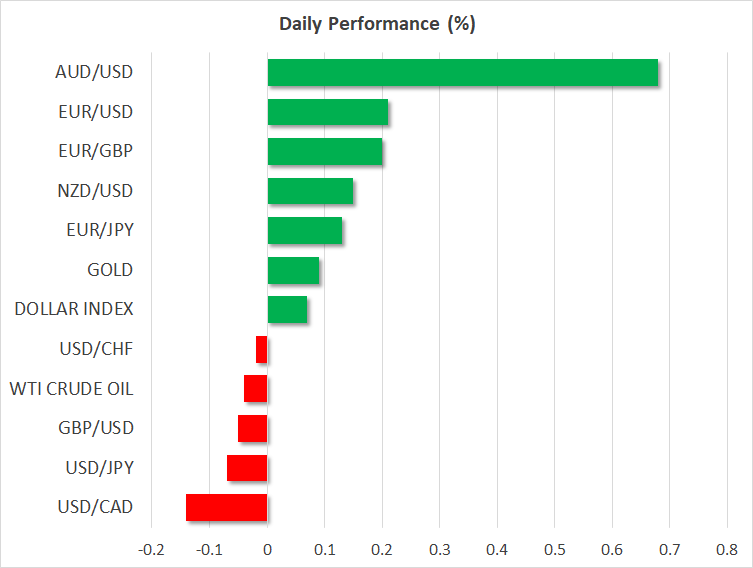 The Brexit saga continues, with the British pound trading in an extremely volatile manner within a wide range amid conflicting headlines yesterday, to end the session little changed even though PM May secured the backing of her Cabinet for the deal. Reports that several lawmakers from within her own party were moving towards a motion of no-confidence likely kept a lid on optimism. Uncertainty is currently riding high, something echoed by the jittery moves in sterling, as the PM may have to simultaneously stave off a Tory rebellion and push the deal through Parliament; a herculean task in itself considering the number of MPs threatening to vote it down.

The 585-page Brexit draft agreement has been made public and lawmakers are currently scrutinizing it, before Theresa May takes the podium in Parliament later today to answer their questions on the specifics of the deal. Hence, the upcoming sessions may continue to be marked by choppy and directionless price action in sterling, albeit with large swings in magnitude, as the parliamentary debate rages on.

Surprisingly, the kiwi was the best performer out of the major currencies on Wednesday in spite of the broader risk averse environment, which saw US stocks close lower and gold attracting inflows. Meanwhile, the aussie is outperforming today, in the wake of stronger-than-consensus employment data out of Australia overnight. Coming on top of the modest acceleration in wages, the sustained progress in the labor market may have fueled speculation for a more upbeat tone by the RBA going forward.

As for the dollar, it barely reacted to the US CPIs for October yesterday, which were a touch softer than expected. Some remarks by Fed Chair Powell overnight proved equally uneventful for the greenback, given the absence of fresh policy signals. The dollar index retreated marginally yesterday, pressured mostly by the euro recovering some poise on the back of Brexit headlines – even despite a contraction in German GDP for Q3 and continued uncertainty around Italy. 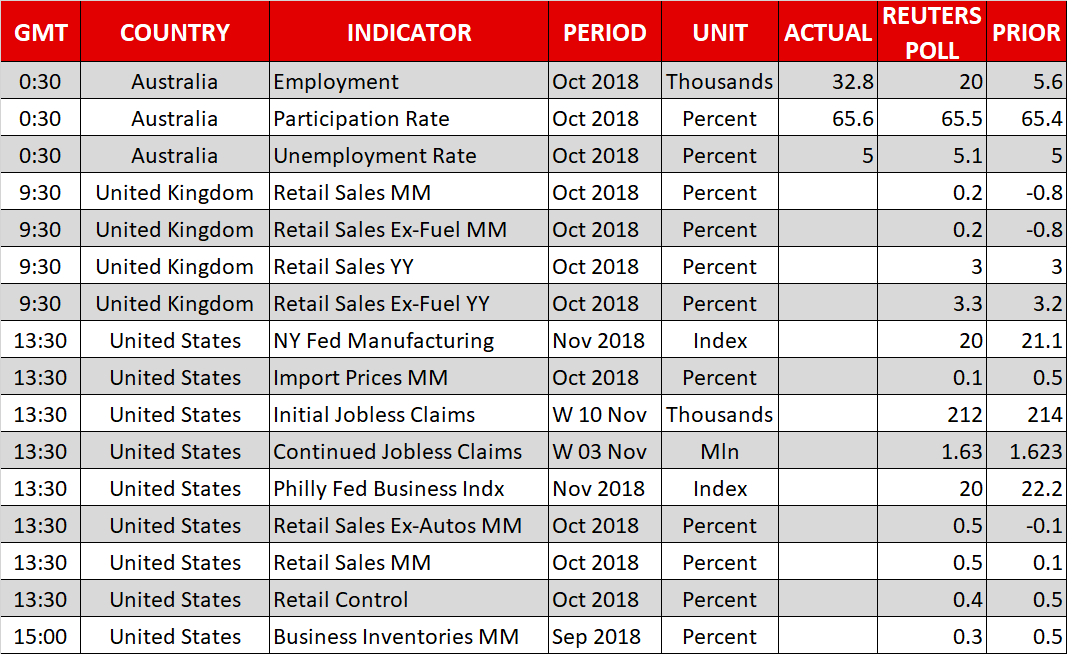 Day ahead: US and UK retail sales coming up; Brexit again in focus

Retail sales out of the US and the UK are dominating attention out of Thursday’s economic calendar. Beyond releases, Brexit developments are again in the forefront.

At 0930 GMT, UK retail sales for October will be made public. Month-on-month, sales are anticipated to record positive growth after contracting in September, something which would allow the annual pace of growth in sales to remain at September’s 3.0%. Core retail sales that exclude fuel from their calculations are projected to rise by 3.3% y/y, slightly faster than the previous 3.2%.

A beat in the numbers may provide a short-term boost to sterling pairs, and vice versa; retail sales are used as somewhat of a proxy for consumption, which makes up a large fraction of the UK economy. However, again the dominant force driving the pound will be developments on the Brexit front. Now that PM May has won her cabinet’s approval on her Brexit plan, the next big hurdle for her is to pass it from parliament.

The US will also be on the receiving end of retail sales data for October. Both headline and core retail sales that exclude automobiles are seen rising by 0.5% m/m, these constituting an acceleration relative to the previous month. Retail control though that is used for GDP calculations is seen expanding by 0.4% m/m, slightly below September’s 0.5%. Earlier reported strong auto sales and wage growth figures may hint to upside potential in the numbers, to the extent these are not already reflected in the forecasts that is.

Weekly jobless claims and monthly releases on business inventories, the New York Fed’s manufacturing index, the Philly Fed’s business index, import and export prices are also due out of the world’s largest economy on Thursday, though these do not tend to act as major market movers, at least not for FX markets.

Fed chief Powell will be participating in a listening session at 1430 GMT, with FOMC policymakers Quarles (permanent FOMC voting member – 1500 GMT), Bostic (voter in 2018 – 1800 GMT) and Kashkari (non-voter in 2018 – 2000 GMT) making public appearances as well. The ECB’s Coeure (1215 GMT) and Praet (1310 GMT), and the BoE’s Tenreyro (1300 GMT) are also on the agenda. Elsewhere, the BoE’s “2nd Conference on Forecasting at Central Banks” commences today and will conclude on Friday.

In energy markets, EIA numbers on US crude stocks due at 1530 GMT are projected to show an inventory buildup of around 3.2 million barrels during the week ending November 9, marking the eighth straight weekly increase, following a rise by roughly 5.8m in the previously tracked week. 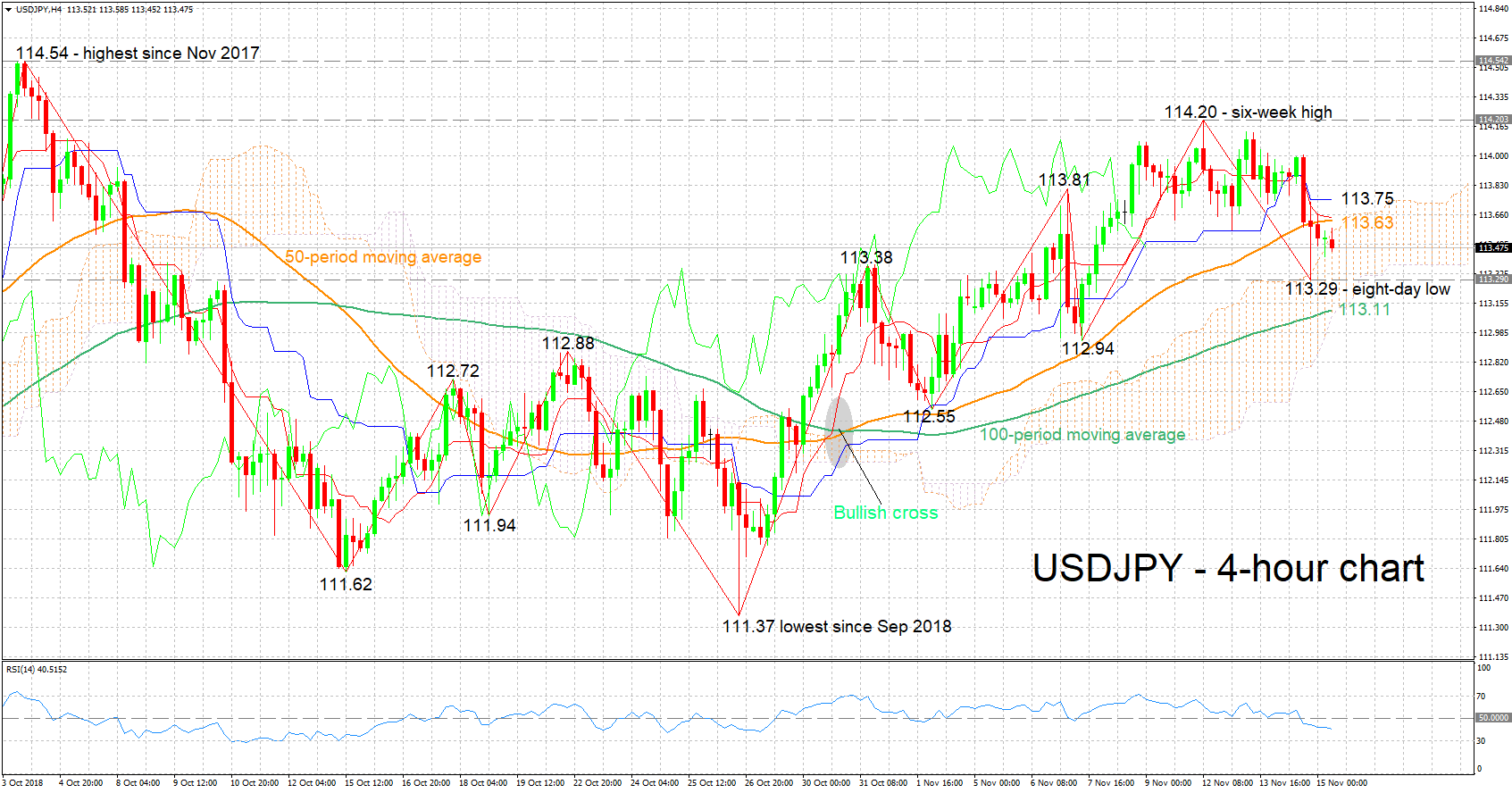 USDJPY lost ground after rising to a six-week high of 114.20 on Monday, eventually touching an eight-day low of 113.29 on Wednesday. The negatively aligned Tenkan- and Kijun-sen lines and the declining RSI are pointing to a shift in momentum to the downside.

On the downside and in the event of disappointing figures, support could come around yesterday’s eight-day trough of 113.29. Not far below lies the 100-period MA at 113.11 (the Ichimoku cloud bottom roughly coincides with this point), with the zone around it encapsulating a bottom (112.94) and a top (112.88) from previous weeks. Lower still, the zone around the 112.55 low would increasingly come within scope.

Safe haven flows – or the lack thereof – can also move the pair.