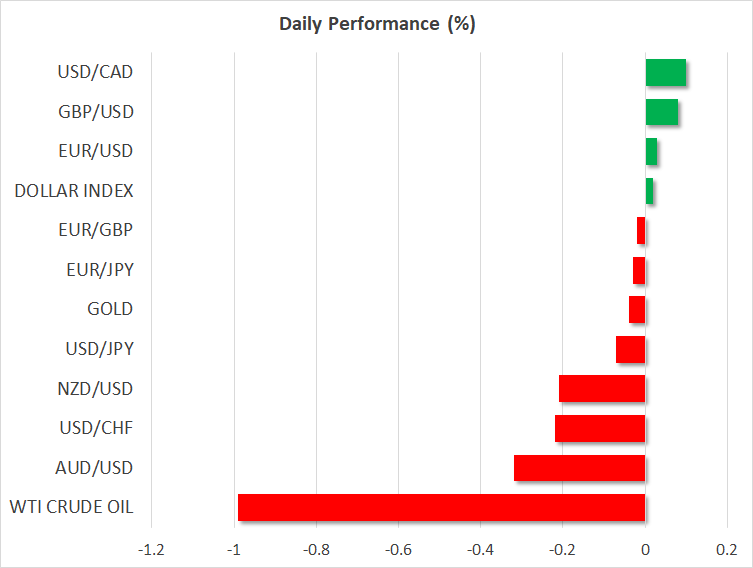 The US president, Donald Trump, sought to play down the latest spat with China on Tuesday, telling reporters “We’re having a little squabble with China because we’ve been treated very unfairly for many, many decades”. Trump also indicated the two sides continue to talk, adding that a deal could happen “much faster” than thought.

Trump’s remarks helped allay market concerns of an imminent collapse in the months-long trade discussions, lifting sentiment. The Dow Jones and the S&P 500 both closed 0.8% higher, while the Nasdaq was up by more than 1%. Asian equities took their cue from Wall Street, rising sharply along with European and US stock futures.

The response in currency markets was more muted, however, with both the yen and the Swiss franc today reversing some of Tuesday’s losses. Gold remained elevated too, drifting only marginally lower to around $1294 an ounce, having briefly peaked above $1300 yesterday.

The continued support for safe-havens suggests markets remain cautious about the fate of the US-China trade negotiations and investors would need to see more concrete signs that a full dialogue is being restored and a deal is back within reach.

Economic indicators out of China today fell short of expectations, raising fresh doubts about the growth outlook. Industrial output slowed sharply from 8.5% to 5.4% year-on-year in April, while retail sales grew at the weakest rate in 16 years.

The downbeat numbers weighed on the Australian dollar, which is often viewed as a proxy for China-related developments. Further weighing on the aussie were unimpressive wage growth figures out of Australia, pushing the currency to a fresh 4-month low of 0.6917 versus the US dollar today.

The focus now for the aussie is April employment numbers due early on Thursday. A weak reading there as well would fuel speculation of a rate cut by the RBA in the coming months.

The Chinese yuan was also struggling, holding close to yesterday’s 4½-month trough of 6.8865 per US dollar even as the poor data raised hopes of more stimulus measures by the Chinese authorities.

Euro and pound subdued on Italy and Brexit woes

The euro found itself testing the $1.12 handle on Wednesday as the Italian budget row threatened to rear its ugly head again. Italy’s deputy prime minister, Matteo Salvini, sparked fears of another standoff between the country and the European Union after he signalled that the government is willing to ignore Eurozone budget rules if it means having to spend more to reduce the high unemployment rate.

Italian 10-year government bond yields jumped to 2-month highs on the comments, triggering a small dip in the euro. However, the single currency later managed to bounce back to around $1.1212 following solid Q1 GDP figures out of Germany.

Sterling also struggled as the UK government said MPs will get a fourth and final chance to vote on the Withdrawal Agreement in the week beginning June 3. But with little progress in the cross-party talks and many lawmakers still opposed to the deal, there’s little hope of the legislation passing. May’s best chance of getting the deal through would be a catastrophic performance by both Labour and the Conservatives in the upcoming European Parliament elections, which could pressure MPs to vote in favour of the Brexit deal.

US retail sales and Canadian inflation coming up

The dollar index extended its recovery from this week’s lows on Wednesday but that could change if retail sales and industrial production numbers due later out of the United States point to slowing growth in April.

The Canadian dollar will also be in focus as the Bank of Canada will closely be watching the latest inflation data to decide whether further rate hikes may be needed this year. 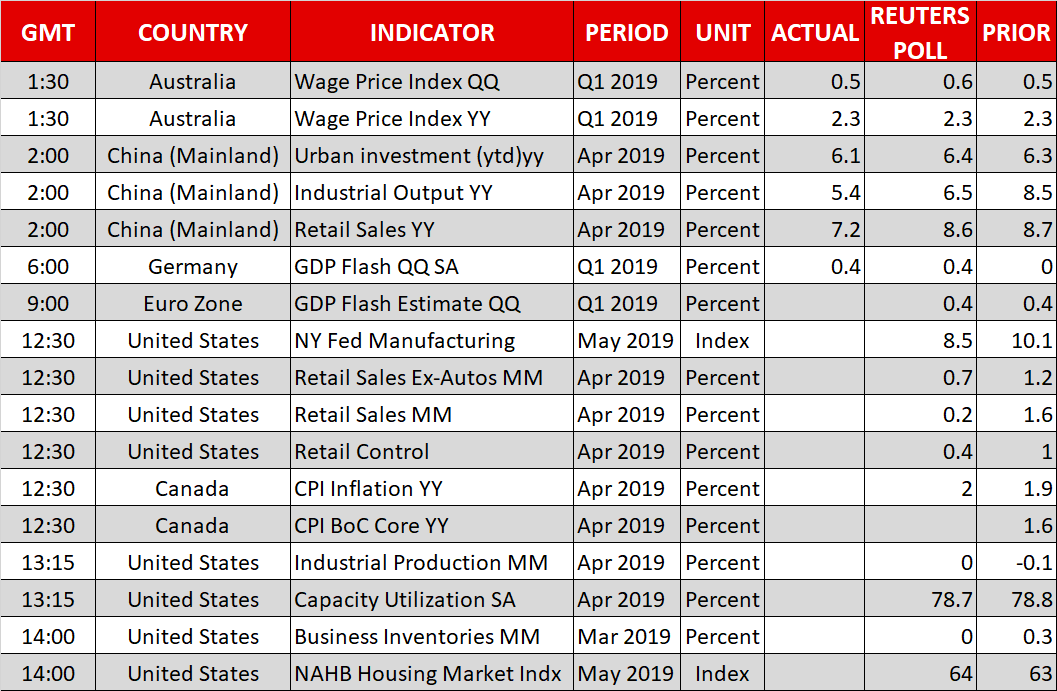