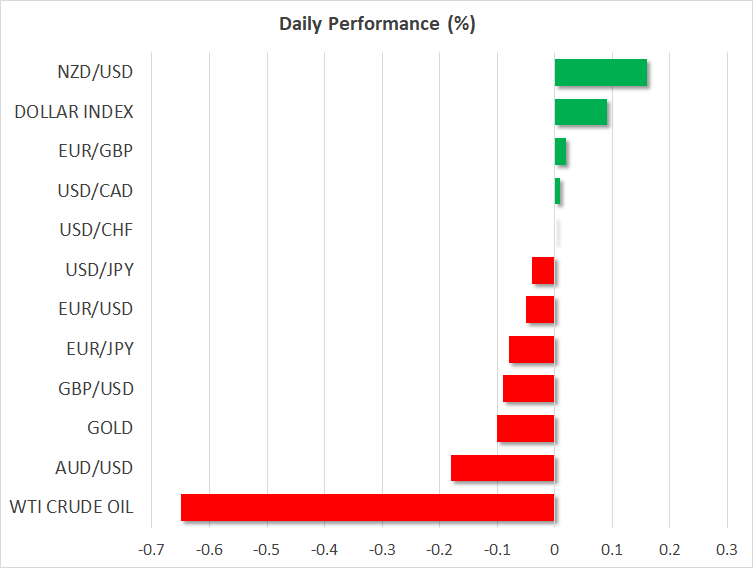 US equity markets closed well in the red yesterday, with the S&P 500 shedding 0.94%, following headlines that President Trump will not meet President Xi before the March 1 deadline for a trade deal, after which tariffs will be raised. The news reignited fears that the ‘trade war’ may re-escalate soon, something that markets were until recently discounting given numerous signals that the negotiating process was slowly but surely moving forward.

In the FX market, the defensive yen attracted inflows as investors sought safety while commodity-linked currencies, most notably the loonie, retreated in tandem with crude prices. Meanwhile, the battered aussie is also on the back foot on Friday, touching a one-month low earlier in the session, after the RBA’s latest economic forecasts were even weaker than markets had expected. The probability for a quarter-point rate cut by October has ticked even higher, to 70% at the time of writing.

As expected, the BoE kept its policy unchanged yesterday and revised down both its growth and inflation forecasts. Cable tumbled on the decision but found fresh buy orders near the 1.2850 area and rebounded substantially, to close the session slightly higher. The recovery came as Governor Carney seemed reluctant to outline the case for a rate cut in case of a no-deal Brexit, instead sticking to the mantra that the Bank’s base-case scenario remains an orderly exit, and hence further gradual rate hikes. The strange thing is that the pound climbed even as the market-implied probability for a rate increase this year fell to 40%, from a little over 50% before the meeting.

On the Brexit front, the situation remains as uncertain as ever. PM May’s request to include a time limit on the Irish backstop was – predictably – rejected by the EU, though the two sides did agree to hold more talks, which at least keeps alive the possibility of an eventual breakthrough. That said, agreeing to talk is far different from reaching a compromise, and in the highly likely event that no real solution is found over the next days, the pound could remain on the back foot as uncertainty mounts further.

The single currency was the worst performer on Thursday, logging a fourth day of losses versus the US dollar, after the European Commission slashed its GDP forecasts for the Eurozone. The bloc is now expected to grow by a mere 1.3% in 2019, from 1.9% in the previous forecast. Alarmingly, most of the weakness is seen in the three biggest economies: Germany, France, and Italy.

These substantial downgrades likely enhanced speculation that the ECB may follow suit and take an axe to its own forecasts when it meets next month, something that would be associated with a more dovish message on future tightening. At the least, it may warrant a new round of long-term loans to banks, the so-called TLTROs.

It’s a relatively quiet day on the data front, with the only tier-one release being employment data out of Canada. Forecasts point to a relatively soft report, with the unemployment rate expected to have ticked up in January. Yet, the nation’s Markit manufacturing PMI signaled a “robust rate of job creation” during the month, so a positive surprise shouldn’t be ruled out. While that may support the loonie on the news, the far bigger driver for the currency will be how oil prices perform.

In the US, San Francisco Fed President Mary Daly will deliver remarks at 18:15 GMT.