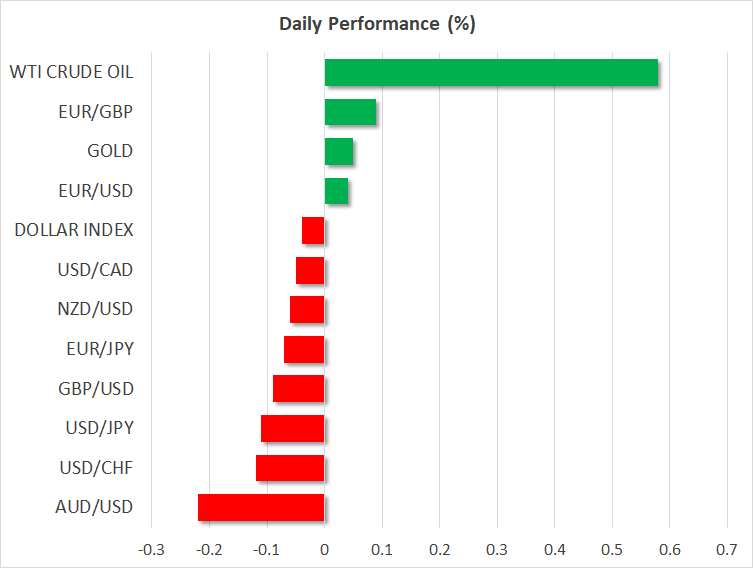 Markets were mostly in risk-off mood on Thursday as a combination of on-going trade frictions and disappointing economic data out of the world’s two largest economies put a damper on investor sentiment. US President Trump once again appeared to be piling the pressure on China by signing an executive order that restricts American companies from doing business with Chinese telecom equipment maker, Huawei.

The news weighed on Asian equities today, though most bourses managed to reverse earlier losses. Futures for European indices were pointing to a negative start despite relief yesterday from reports that Trump will likely delay his decision by up to six months on whether or not to raise tariffs on car imports.

Those reports, along with news that US Treasury Secretary Steven Mnuchin is expected to travel to China soon to resume trade talks helped Wall Street close higher for a second straight day. However, US stock futures have turned negative today as market sentiment remains fragile with the outlook for the global economy once again looking dimmer following the latest escalation in the Sino-US trade dispute, as well as signs that growth in both the US and China is slowing again.

The US dollar stood firm against a basket of currencies but was weaker against the yen and Swiss franc. The greenback briefly touched a low of 109.14 yen yesterday after a surprise drop in US retail sales in April. Industrial production also shrank unexpectedly in April, raising fresh concerns about the growth outlook.

The softer data prompted investors to increase their bets of a rate cut by the Fed by year-end. Markets are now fully pricing in a 25-bps rate cut by December. The shift in expectations dragged Treasury yields lower. But the dollar was able to stay supported, coming under pressure only against other safe havens, as troubles elsewhere continues to keep the US currency attractive relative to other majors such as the euro and the pound.

The single currency was able to hold above the $1.12 level, finding some support from the delay in auto-tariffs, which has the potential to severely damage the Eurozone’s car industry. Sterling, meanwhile, hit a 3-month low below the $1.29 level, as investors doubted whether Theresa May will be able to strike a deal with Labour in time before her Brexit deal is put to a vote for a fourth and final time in early June.

Growing expectations that the Reserve Bank of Australia could cut rates as soon as June pushed the Australian dollar to a 4½-month low of $0.6891 today. Yesterday it was weak Chinese figures that contributed to the sell-off and today it was the Australian employment report. Australia’s unemployment rate rose to the highest in 8-months, and, despite gains in overall employment, full-time jobs fell in April.

While it may still be too soon to come to any conclusions about the labour market, traders appear to have already made up their minds and are pricing a 25-bps rate cut by August.

The worsening outlook had little impact on oil prices as rising tensions in the Middle East offset growth worries as well as a jump in US crude stocks last week. There are growing fears of a conflict in the region as US-Iran relations deteriorate fast with the US reportedly pulling its staff from the area. There were also attacks on Saudi oil tankers and facilities over the past few days, raising worries about supply disruptions.

Brent crude climbed back above the $72 a barrel level, while WTI was last trading around $62.25. Unless there’s a significant de-escalation in tensions, oil prices are likely to remain supported in the coming days or weeks even as the demand picture is increasingly at risk from weaker global growth.