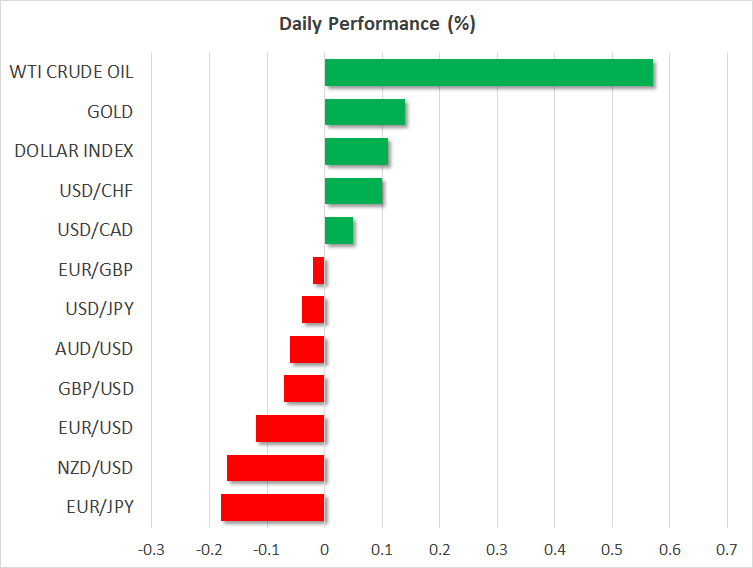 Investor sentiment stayed in risk-off territory on Monday, with the safe-haven Japanese yen being the best performer among the G10 currencies, as concerns over a deteriorating macro picture in China and the potential fallout from its trade standoff with the US dominated. The monetary stimulus and promises of fiscal spending from Chinese authorities were paradoxically interpreted by investors as a sign the nation is “digging in” for a prolonged economic battle with the US, triggering a capital flight from Chinese markets. The yuan consequently weakened, something picked up by the US Treasury’s radar, which voiced concerns about the currency’s depreciation. The Treasury’s biannual FX report – due out next week – could shed some light on this matter.

The dollar also advanced in this environment, largely capitalizing on weakness in the euro, which remained on the defensive as worries around an Italian-EU standoff sent yields on longer-dated Italian bonds to  highs last seen in 2014. The rhetoric escalated yesterday, with Italy’s deputy PM Salvini accusing the EU Commission of being the “real enemy” of Europe, taking aim at Brussels’ austerity policies. Euro/dollar fell from 1.1520 to settle a few pips above 1.1470, flirting with 6-week lows.

In Brexit-land, the pound pared some of its earlier losses – though still surrendered ground to the yen and dollar – after UK media reported the EU is prepared to make a new offer to break the Irish border deadlock. Goods destined for Ireland could be checked for safety and regulatory standards “anywhere” in the UK, not just in ports as was previously discussed, thereby avoiding the need for a regulatory barrier across the Irish Sea. Sterling will likely remain hostage to incoming headlines in the coming weeks, with trading likely to stay choppy overall before the currency assumes a clearer direction higher on a potential deal, or lower in the absence of one.

What caught nearly everyone by surprise was the antipodeans – aussie and kiwi – moving higher against the greenback even despite poor risk appetite and the dollar being broadly strong itself. There was no news from either Australia or New Zealand, and considering that both aussie/dollar and kiwi/dollar rebounded from 2½-year lows, the bounce may have been mostly owed to investors locking in profits on prior short bets.

Barring the release of September’s housing starts data out of Canada at 1215 GMT, Tuesday’s calendar is empty of any potentially market-moving releases throughout the remainder of the day. However, other developments, for example related to Italian politics, can well lead to movements during today’s trading.

A non-data related euro-driver are developments having to do with Italy’s budgetary plans which increasingly point to a clash between Italian and EU officials, this being a euro-negative. On the one hand, Italy may be “too big to fail”, but on the other it could perhaps be argued that it is also “too big to save”. It remains to be seen whether the two sides will constructively sit to the negotiating table, easing worries, or whether tensions will intensify. Pointing to the direction of the latter, Italian Deputy Prime Minister Matteo Salvini yesterday denounced European Commission President Jean-Claude Juncker and Economics Commissioner Pierre Moscovici as enemies of Europe.

On Brexit, any concrete evidence that a Brexit deal is not far as expressed by EU negotiators recently, is likely to boost sterling. Conversely, should the UK-EU differences come the fore as unworkable, at least at the moment, then the British currency is expected to come under selling pressure.

Elsewhere, numerous Fed policymakers are on the agenda: Kaplan at 1130 GMT, Evans at 1400 GMT and Harker at 1700 GMT. Neither of them holds voting rights within the FOMC in 2018. Still, their comments may attract additional attention in light of a Fed that overall appears more and more confident in hiking interest rates. In addition, the ECB’s Mersch will be participating in a panel discussion at 0830 GMT and Bank of England Governor Carney will be sharing some remarks at 1800 GMT. 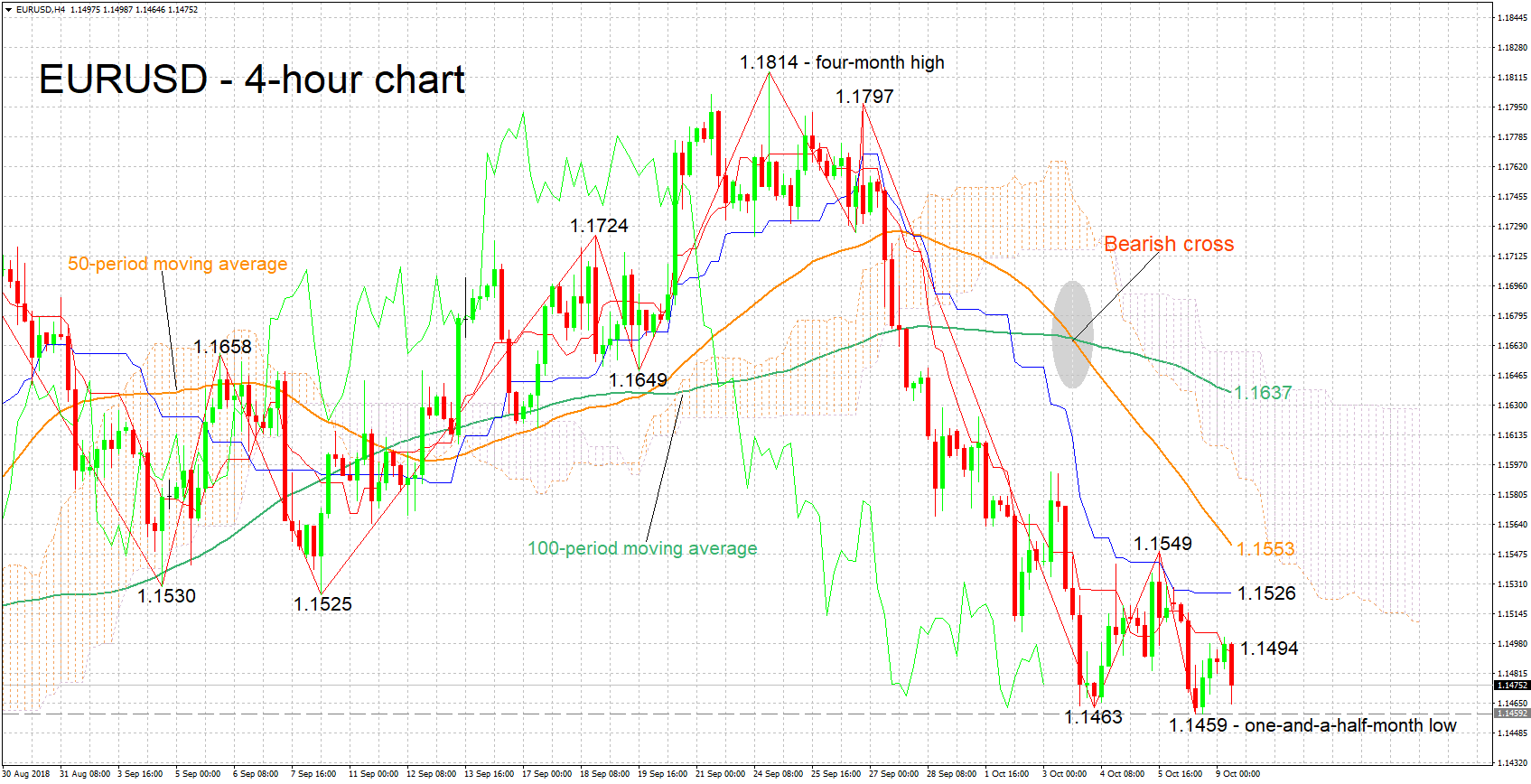 EURUSD is currently trading not far above Monday’s one-and-a-half-month low of 1.1459. The negatively-aligned Tenkan- and Kijun-sen lines are acting as a testament of the bearish bias that is in place. The Kijun-sen flatlining though may be a signal that negative momentum is easing.

Rising angst over an Italy-EU clash is expected to weaken the pair. Immediate support to losses may occur around yesterday’s low of 1.1459, with the 1.14 handle being eyed in case of a downside violation. Further below, the focus would shift to mid-August’s more than one-year nadir of 1.13.

Easing tensions on the other hand, are likely to boost EURUSD. A first line of resistance could take place around the Tenkan-sen at 1.1494. Not far above lies the Kijun-sen at 1.1526; the area around this point encapsulates a couple of bottoms from the recent past. Further above, the attention would turn to the current level of the 50-period moving average line at 1.1553.