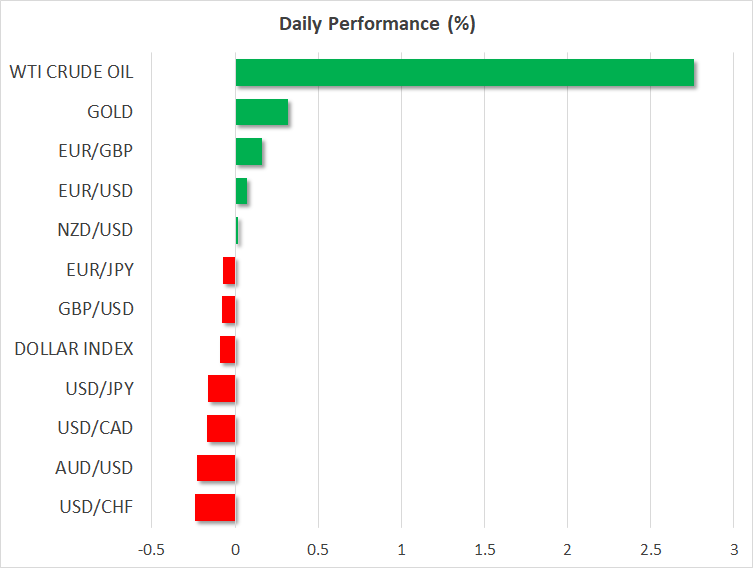 Safe havens back in demand

Fading hopes that there could be a breakthrough in the stalled trade talks between the United States and China at the G20 summit weighed on market sentiment for a second day. Safe-haven assets such as the yen and government bonds led the way, while equities extended their losses.

The yen rallied against the risk-sensitive Australian dollar, hitting a 5-month top of 74.77, while against the greenback, it firmed to near a one-week high of 108.15. Trade uncertainty also gave the US dollar broad support even as investors are increasingly confident that the Federal Reserve will cut interest rates in the coming months.

Fed rate cut bets were boosted further yesterday from US inflation data that pointed to weakening price pressures. The annual rate of CPI eased by more than forecast in May, falling to 1.8%. The next big clue for the US economy will come from Friday’s retail sales figures, though a bigger focus for investors is next week’s policy meeting by the Fed on June 18-19.

Gold was another beneficiary of the risk-off tone and was last up at $1337 an ounce. The yellow metal is in line for even steeper gains and could attempt to break above $1350 should the Fed next week signal that rate cuts are on the way.

The Swiss franc outperformed too, though its advances were led more by a not-so-dovish SNB at its policy meeting today than safety flows.

The Australian dollar’s losses weren’t limited to the yen as the aussie slipped across the board, falling to two-week lows against the US dollar just above the $0.69 level. Australia’s jobless rate was unchanged at 5.2% defying expectations of a drop, and while employment rose robustly, the labour force participation rate was also up, pointing to plenty of slack in the labour market and keeping the door open to more rate cuts by the RBA.

Sliding oil prices were a further drag on the aussie as well as on other commodity-linked currencies such as the kiwi and loonie. WTI and Brent crude were both up sharply on Thursday, recovering most of yesterday’s losses when they plunged to 5-month lows that came after there was another big jump in US crude stockpiles. However, with no end in sight to the US-China trade war and slowing growth around the world, the bearish outlook for oil is unlikely to change anytime soon.

The euro and pound were stuck below key levels on Thursday following yesterday’s declines against the dollar. The single currency’s rebound above $1.13 was cut short after President Trump threatened to impose sanctions on the Russian natural gas pipeline project, Nord Stream 2, which, when completed, would become a major source of energy supply for Germany.

The pound meanwhile remained on the backfoot, having reversed yesterday’s earlier gains to tumble below $1.27 following a failed attempt in the British Parliament by opposition MPs to pass legislation that would block any attempt of a no-deal Brexit. There was some relief, however, when Boris Johnson – the favourite to replace Theresa May as prime minister – said he is “not aiming for a no-deal outcome”. Conservative MPs will today vote in the first round of the elimination process to select their next leader and the results are expected soon after 1200 GMT. 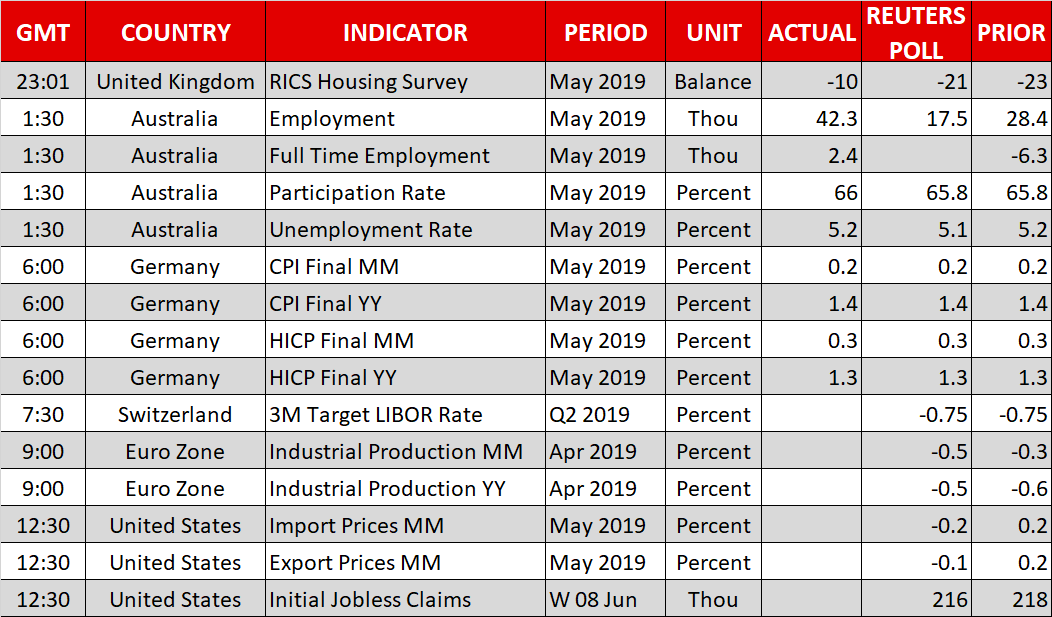