Just before the second round of quantitative easing (QE) starts on November 1, the Eurozone’s preliminary GDP growth figures for the third quarter and October’s initial inflation estimates will likely show on Thursday at 10:00 GMT that monetary stimulus is much needed as the data are forecast to come in softer.

Despite the ECB lowering its deposit rate to -0.5% in September and announcing the start of a new asset purchase program that should boost liquidity in the banking sector from November onwards, Eurozone businesses did not get very excited according to September’s HIS Markit PMI survey. The Eurozone Manufacturing PMI remained below the 50 threshold that separates expansion from contraction for the eight consecutive month and near 7-year lows, with German factories – which are a key source of growth in the Eurozone – performing the worst as the German economy looks to have stagnated. 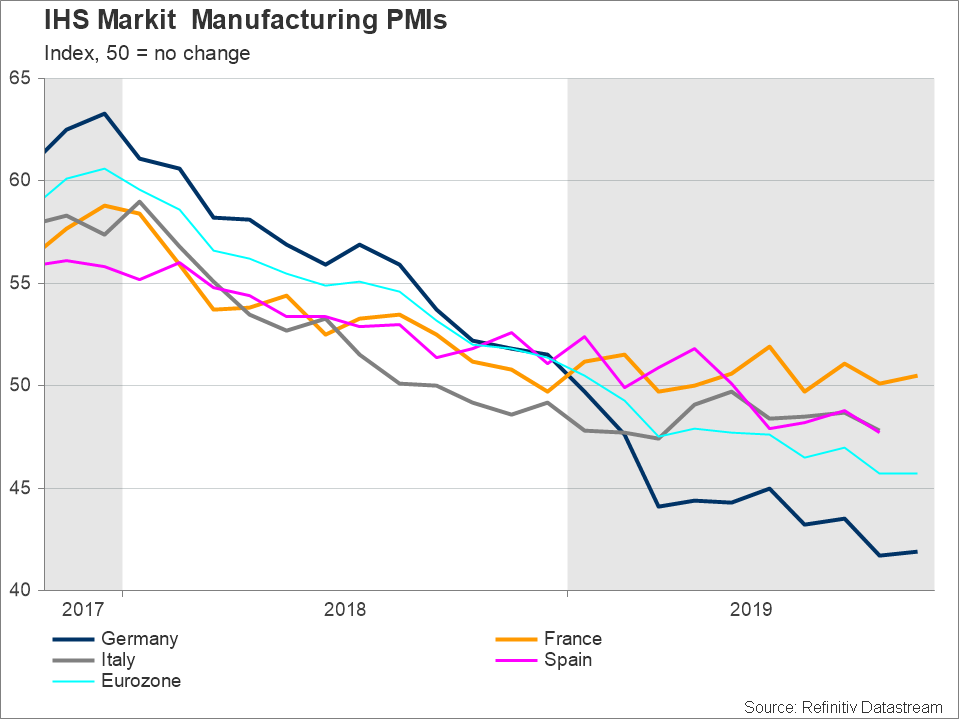 The services sector appeared in better condition in September but was overall on a downward move in the third quarter and with the trade surplus narrowing in the corresponding period, a slower GDP growth in Q3 is likely. Refinitiv analysts forecast a softer GDP growth of 1.1% year-on-year versus the 1.2% seen in Q2, while on a quarterly basis they expect a smaller expansion of 0.1% compared to 0.2% in Q2.

Turning to inflation, this is projected to be another weak spot as usual. With consumers and businesses spending more cautiously in the face of Brexit and trade uncertainty, and oil prices remaining subdued, the headline CPI rate is said to have inched down by 0.1 percentage points to 0.7% year-on-year in October, with the strength in the euro during the month also offsetting any upside pressure. In the absence of volatile items such as energy and food, the core measure, which mirrors a clearer picture of the inflation trend, is also anticipated to slip by an equivalent percentage to 1.1% y/y. 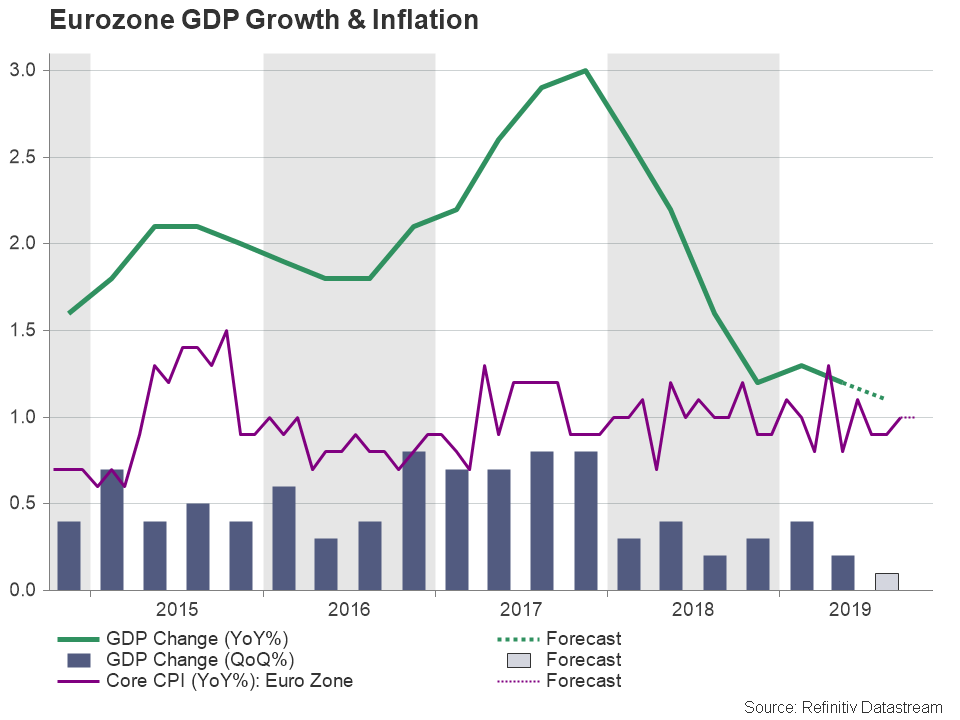 In an environment of continued global uncertainties, the ECB does not project the headline inflation to rise towards the “below but close to 2.0%” target, nor does it anticipate a significant pick up in GDP growth in the second half of this year. Therefore, any expected slowdown in Thursday’s indicators may not surprise policymakers.

To ease borrowing conditions and boost demand in the bloc, the central bank is scheduled to start buying 20 billion euros worth of bonds per month in November as part of its revived 2.3 trillion euros QE program and exempt some banks from negative interest rates to minimize any damage in the banking sector. Deposit interest rates are also likely to stay at the current level of -0.5% or lower until inflation converges towards the target.

However, after a decade of support from the central bank, inflation seems to be weirdly unaffected and questions are rising whether additional stimulus could make any difference. Markets are pricing a very small probability of another 0.10bps rate cut, while minutes from the September meeting have indicated that policymakers were divided about whether a new QE program was appropriate. More importantly, Mario Draghi in his final speech as ECB president and before the former IMF director Christine Lagarde takes charge this Friday, admitted that monetary policy has lost some power and urged member states to provide fiscal help and create a common budget that would bring more economic stability to the Eurozone. With Lagarde looking to be on the same page as Mario Draghi, the ECB may stick to the current policy guidance or at least try to pressure member states to relax fiscal policy before considering any additional stimulus.

Meanwhile in FX markets, the euro enjoyed strong buying interest against the US dollar during the month of October, rallying from a 28-month low of 1.0878 back to the 1.1100 territory. In case GDP growth and inflation numbers arrive lower than expected, EURUSD should break under the 1.1067 support to put the rebound in doubt, while in the event of a positive surprise, traders would like to see a closing price above the 1.1179 resistance to further increase buying orders.