Facebook Inc. is in a tough battle with regulatory authorities and central banks around the world like no other company as its large size and its recent malpractices in data protection stand as a barrier in developing new products. Despite that, the social giant which releases financial results for the third quarter after the market close on Wednesday is expected to prove its resilience once again as its stock does on Wall Street.

Having paid a $5 billion settlement with the Federal Trade Commission following the Cambridge Analytica data privacy scandal in 2018 and later facing additional antitrust probes, it is difficult for Facebook to regain Congressional trust on new ideas, especially if that means influence in the currency system. Zuckerberg set the alarm in the banking sector after surprisingly announcing the launch of its Libra cryptocurrency as early as in June 2020, with central bankers and regulators strongly opposing the idea as the digital currency that will be backed by a reserve of main currencies could disrupt monetary control and enhance money laundering not only in the US but also globally given the Company’s massive user base and the fast transaction feature of digital currencies.

Indeed, unless Facebook addresses its data security and other social failures and provides efficient solutions, it will struggle to obtain any regulatory approval for its new projects, including the recent news app, something the US Congress clearly messaged last week, even threatening to shut the social media platform. On Wednesday, however, Facebook will prove it has enough financial power to keep fighting any legal barrier despite some softness in Q3 numbers.

In the third quarter, daily active users are expected to have increased to 1.61 billion from 1.59bln in the previous quarter, marking a yearly increase of 8.1%, while monthly users are forecast to have risen to 2.44bln from 2.41bln, registering an annual growth of 7.6%. 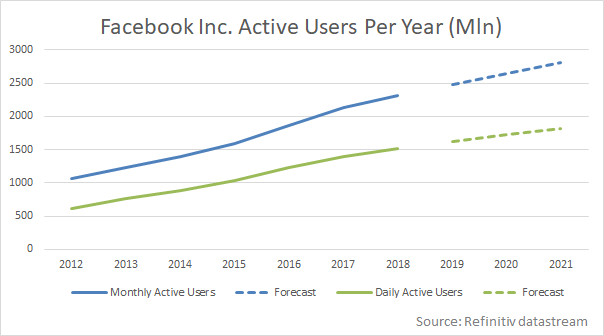 Revenues are forecast to keep the upward direction and reach $17.3bln in the three months to September, which is 26.5% up on a yearly basis and almost 3.0% higher than in the preceding quarter. Analysts predict another remarkable pickup in the next quarter, with the Company generating $70.2bln by the end of the year, 27% stronger than in 2018 thanks to income from advertisement and demand in the US and Canada.

Despite the legal controversies, the Company, which owns the popular Instagram and WhatsApp as well is still trusted by its users and is invaluable to advertisers who want to reach customers through famous social platforms where more than a third of the global population visits consistently during the day. Facebook’s stock performance on Wall Street reflects that. Despite easing in the third quarter the stock remains elevated since the end of 2018, maintaining the long-term uptrend and outperforming the broader S&P 500 index. A stronger than expected outcome on Wednesday could see the stock retesting the 191.50-195.00 resistance area, while in case the data disappoint, the focus will shift to the 182-177.00 support zone.

In terms of competition, besides the money market, Facebook is pushing efforts to expand in other areas too. In September, it agreed to buy the 4-year old CTRL-labs company that develops a bracelet which allows consumers to control computers with their minds, while in November it will start shipping its Portal TV along with its Portal and Portal Mini screens. Moreover, in partnership with Disney’s ESPN Division, exclusive shows, and other videos will be available on Facebook Watch, while it is also expected to provide sports video content, adding some pressure to Twitter and Amazon.