It’s a busy data week in the UK, with GDP numbers for November hitting the markets on Monday at 09:30 GMT, before inflation figures on Wednesday and retail sales on Friday. The pound seldom reacts to economic data nowadays, but that may change now that the Bank of England (BoE) is considering cutting rates. In fact, markets may be underpricing the possibility of a rate cut, implying that the risks surrounding the pound may be tilted to the downside from current levels even if Brexit risks remain subdued in the coming months.

Economic data have truly taken a back seat in driving the British pound in recent years, with the Brexit story taking the leading role instead. Investors figured that a solution to the political crisis would probably solve most of the economic problems as well, by restoring confidence and lifting business investment. Meanwhile, the BoE had its hands tied by the unstable political environment, so incoming data were considered less vital for monetary policy.

Now though, this dynamic may be changing. Following Boris Johnson’s landslide election victory, the spotlight has come off Brexit, something that probably won’t change until the negotiations resume in earnest again around late February or early March.

At the same time, the BoE seems ready to make a move. Two of the nine BoE policymakers voted for an immediate rate cut at the latest meeting, and Governor Carney recently suggested that a cut to boost the ailing economy is under careful consideration indeed. He made it clear that if the economy remains sluggish, then more stimulus will likely be needed.

But investors still not buying it

While signs are accumulating that rates might be cut soon, traders are still not ‘buying it’. The probability for a rate cut over the entire year is currently near 70%, which still seems quite low considering the frail state of the economy and the dovish signals by BoE officials. 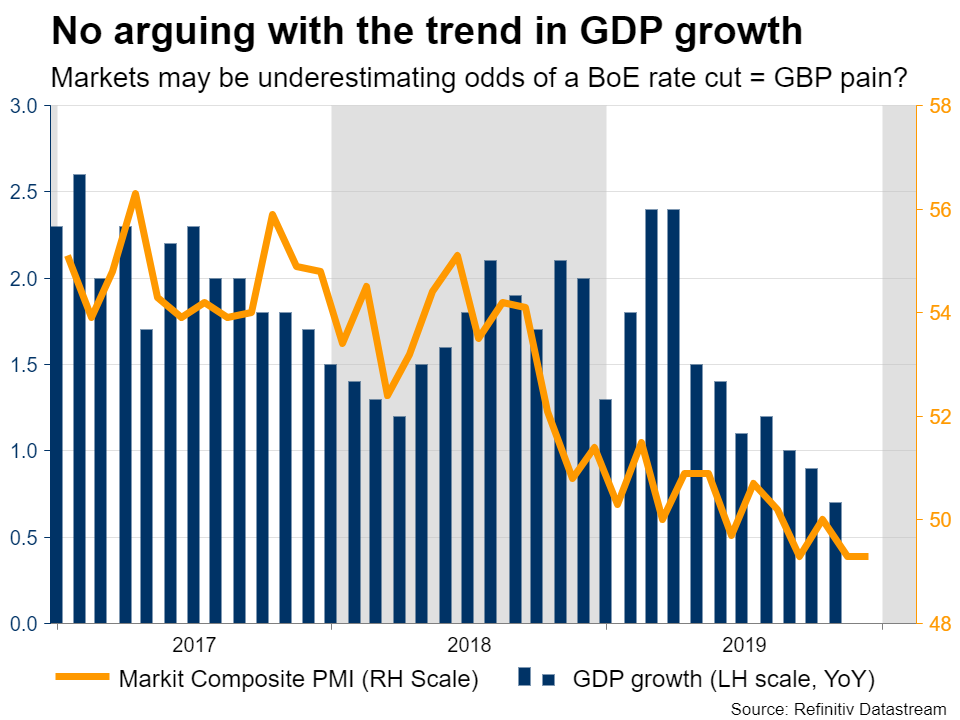 The composite PMI has been stuck at or below the 50 mark in recent months, indicating that the UK economy is either in contraction or in stagnation. A similar trend is evident in the ‘hard data’ with economic growth running at an alarmingly slow pace, while inflation remains below target.

In other words, unless economic data take a dramatic turn for the better, it’s very likely that the BoE will cut – and markets seem to be underpricing that scenario. The implication is that when investors wake up to this risk, the pound could fall notably as the path for monetary policy is repriced.

This is where economic data become important again. The BoE seems keen to examine some post-election data before drawing any real conclusions about the economy, so incoming figures could really catch the market’s attention. GDP growth is forecast to have stagnated on a monthly basis in November once again, which if met, would push the annual growth rate down.

As for the inflation figures, they are unlikely to show any improvement either if the services PMI for December is any guide. It signaled that prices charged by firms slowed to their weakest pace since 2016, which points to a potential decline in the core CPI rate.

Retail sales are much more volatile but given the rebound in the BRC retail sales tracker for December, a similar phenomenon may be seen in the official figures too.

Taking a technical look at pound/dollar, immediate support to further declines may be found near the 1.3050 area, with a downside break opening the door for the 50-day simple moving average (SMA), currently at 1.3011. A dip below might pave the way for the 1.2910 zone.

On the upside, the first durable obstacle for the bulls may be the 1.3170 region.