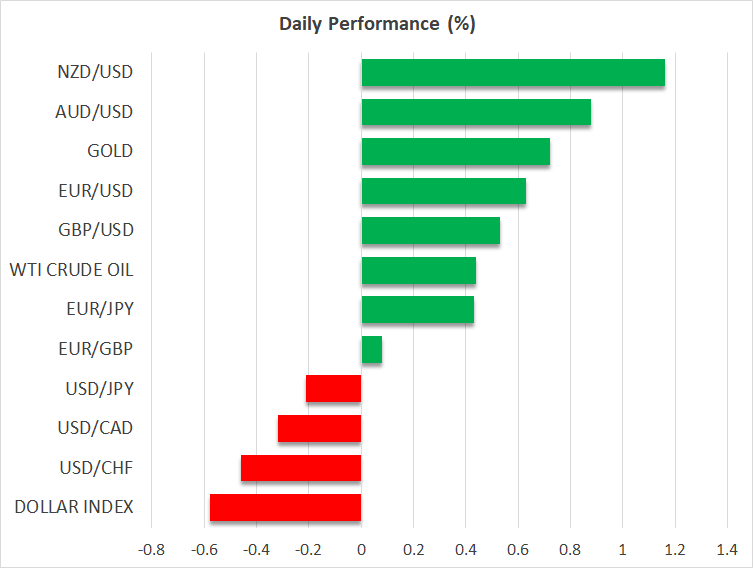 Trading gets off to a cautiously optimistic start

Worries about high inflation and the worsening growth outlook continued to ebb somewhat on Monday, though risk appetite still lacked concrete drivers even as there was some positive news flow. The turnaround came late last week when China cut the lending rate for mortgages in a bid to boost its flagging housing market, and over the weekend, Shanghai reopened part of its metro system in a further sign that some normality is returning to the city of more than 25 million.

However, the progress in Shanghai is being overshadowed by a fresh outbreak in the capital – Beijing – where cases have jumped to a record level. The virus situation in China is far from being under control, even though authorities have had some success with their zero-Covid strategy.

What’s likely gotten the markets more excited today is confirmation by US President Joe Biden that he will discuss with Treasury Secretary Janet Yellen the possibility of removing certain Trump-era tariffs imposed on China. Biden is currently on a tour of Asia to launch a new Indo-Pacific pact aimed at improving economic cooperation, including fixing supply chain problems.

Whilst investors see the initiative as a step in the right direction, its critics argue it doesn’t go far enough and negotiations have yet to start.

Nevertheless, the encouraging signals by the Biden administration have provided a bit of respite to risk assets and the safe-haven US dollar is approaching three-week lows against a basket of currencies. If Biden goes ahead with reducing tariffs on Chinese imports, that could go some way in lowering inflation in the US. Hence, the US dollar could struggle further still if this amounts to anything.

In equity markets, Asian stocks were mixed today, but European shares were on a much firmer footing as Wall Street futures advanced by about 1%.

The S&P 500 closed flat on Friday but did manage to bounce back from session lows when it briefly entered bear market territory. Despite the last-minute rebound, however, the index logged its seventh straight week of losses.

There’s been little boost from the retreat in Treasury yields to growth stocks as the decline is being led by growth jitters rather than by easing expectations about Fed rate hikes due to inflation peaking.

The Fed will publish the minutes of its May FOMC meeting on Wednesday, but policymakers are unlikely to reveal anything more than what they’ve already been strongly signalling in the past couple of weeks. The Fed looks set to hike rates by 50 basis points twice more, in June and July, but the path after that will be determined by whether or not inflation starts to moderate.

Nonetheless, any surprise views on the inflation picture might stir markets.

Investors will also be paying close attention to the flash PMI readings for May, which will be doing the rounds globally on Tuesday.

Kiwi and aussie lead the gainers ahead of flash PMIs

The battered euro and pound have been enjoying a solid rebound on the back of the softer dollar. But traders will be on the lookout for any warning signs of a recession in the PMI reports, hence, the two currencies remain vulnerable to resuming their slide.

The New Zealand dollar is currently the best performing currency on Monday, gaining about 1.2% versus the greenback in anticipation that the Reserve Bank of New Zealand will raise interest rates by another 50 bps on Wednesday.

The Australian dollar wasn’t far behind, as it climbed above $0.71. Although the risk-on mood is what’s primarily behind the aussie’s rally today, Saturday’s federal election that ended the ruling conservative’s nine-year reign may also be lifting it.

Many investors would have preferred a continuation of the status quo, with the Liberal-National coalition holding onto power, but the Labor Party’s decisive win at least puts them on track to form a majority government, avoiding a hung parliament.