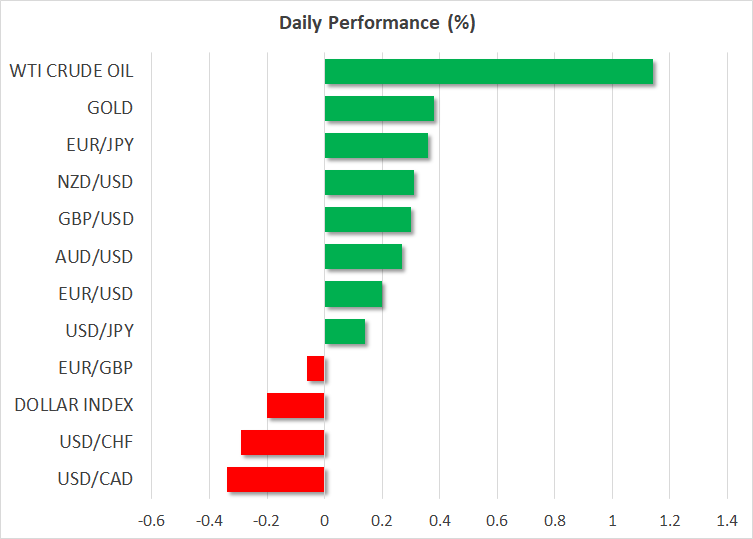 Dip buyers return to save the day

Equities were on a steadier footing on Tuesday as the selloff on Wall Street appeared to be cooling off following a miserable start to the New Year for the tech behemoths. The tech-dominated Nasdaq Composite briefly flirted with correction territory on Monday, plunging by 2.7% at one point before making a powerful comeback to close up 0.05%. The Dow Jones and S&P 500 weren’t as lucky however, with the latter unable to completely erase its losses to close lower for the fifth straight day.

This is likely taking the shine off the rebound as Asian markets seem unimpressed and stocks in China and Japan ended today’s session in the red. However, European shares opened with solid gains, recouping a good chunk of yesterday’s losses.

Omicron keeping investors on their toes

The uptick in government bond yields that came about in mid-late December gathered additional steam at the start of 2022 as investors grew increasingly doubtful that inflationary pressures will abate quickly. The explosion of Covid cases globally due to the highly contagious Omicron variant is keeping supply chains strained even though many countries have opted against new restrictive measures. Yet, swathes of people are being forced to self-isolate, disrupting businesses in all sectors of the economy.

Furthermore, China is not letting up on its zero-Covid policy and continues to lock down big cities whenever clusters are discovered as it tries to eliminate the virus before the Winter Olympics kick off in a few weeks’ time.

With the supply constraints likely to keep inflationary pressures simmering for at least several more months, investors are nervous about how much higher yields will go. Stocks with bloated valuations become riskier investments when borrowing costs start to rise, particularly longer-term rates, hence why this rotation from growth and tech stocks into value stocks might only be taking a breather and there’s more pain to come for the Nasdaq.

Powell and US inflation in focus

On Wall Street, a Fed liftoff in March is looking more certain by the day so the bigger concern right now is what the terminal rate will be. Money markets have fully priced in three rate hikes for this year and the odds for a fourth are rising. This implies a growing number of traders see the Fed funds rate peaking at 2.0% instead of 1.75%.

Tomorrow’s CPI readings out of the US should give some clues as to whether Fed policymakers are about to get even more worried about soaring prices. In the meantime, markets will be looking to Fed Chair Jerome Powell for an update on his views on inflation during his confirmation hearing in Congress later today.

In prepared remarks for the hearing, Powell reinforced the central bank’s commitment to fighting inflation by pledging to prevent it from becoming entrenched.

In the currency markets, the US dollar was weaker against a basket of currencies as the 10-year Treasury yield pulled back slightly and as risk appetite improved on the back of the rebound in tech stocks. The risk-sensitive commodity dollars were all firmer against the greenback and the pound edged higher too, hitting a fresh two-month high of $1.3619.

The euro crept up to around $1.1340 but the yen slipped against all of its major rivals.

Oil prices also benefited from the positive mood, with WTI futures climbing to around $79.50 a barrel, while gold advanced above the $1,805/oz mark.