Week Ahead – Tracking the recovery: is Europe lagging the US?

The latest flash PMI releases will dominate the economic agenda next week as the recovery in the United States appears to be picking up a gear, while the European rebound may have hit a snag. The tables have been turning lately in the US vs Eurozone recovery story, threatening to unravel the euro rally. Trying to predict the economic comeback from the pandemic will also be preoccupying policymakers at the Reserve Bank of New Zealand at their September meeting amid lingering speculation about negative rates. One central bank that has already hit the floor with negative rates is the Swiss National Bank, which is due to hold its quarterly gathering next week.Is the European euphoria over?

Europe may still be simmering under unusually warm temperatures, but the economic climate may have already started to cool. The last set of PMIs by IHS Markit were far from encouraging and the September numbers will be crucial in determining whether this was simply a mild tapering in momentum or a sign of the limits to how much economic life can return to normal while the pandemic rages on.

The flash readings for the euro area are due on Wednesday and the forecasts suggest the recovery has been moderating further in September. The manufacturing PMI is expected to slip 0.1 points to 51.6, but more worryingly, the services print is anticipated to fall to 50.2 – barely holding in expansionary territory. The Eurozone’s composite PMI is projected to decline from 51.9 to 51.6. 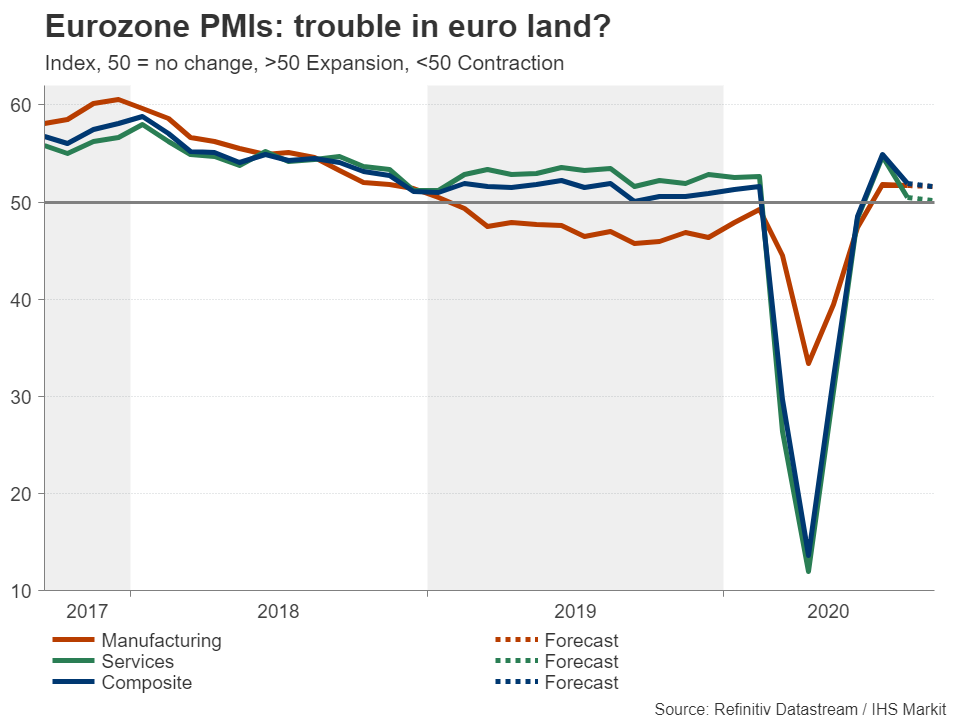 Investors will be able to have another glimpse into the progress of the recovery from Germany’s Ifo business survey on Thursday.

Any disappointment from the PMI data could prove to be the final nail in the coffin for the euro rally. The single currency has been moving sideways during September as investors scale back some of their more optimistic forecasts for the Eurozone economy. If the data fail to provide clear signals, the euro is likely to extend its consolidation. However, strong surprises, whether positive or negative, have the potential to break this trading range as a clearer picture would emerge about where growth is headed in Q4.

The euro’s next direction will certainly be watched very closely by the Swiss National Bank, which effectively views the euro/franc exchange rate as its main policy tool given its reluctance to cut rates below -0.75%. The SNB’s predicament means it is almost certain to keep policy unchanged on Thursday. But Chairman Thomas Jordan may step up his warnings of forex intervention as the Swiss franc has not gone where the Bank would have liked it to since the last meeting.

The positive sentiment for Europe’s recovery prospects that’s been in play since late May has been anathema for the SNB as it seems to have infected the franc too, constraining the euro’s advances versus the franc, while franc/dollar has been taking its cues from euro/dollar. In reality, it’s unlikely that Jordan will have more success than in the past in talking down the safe-haven franc. 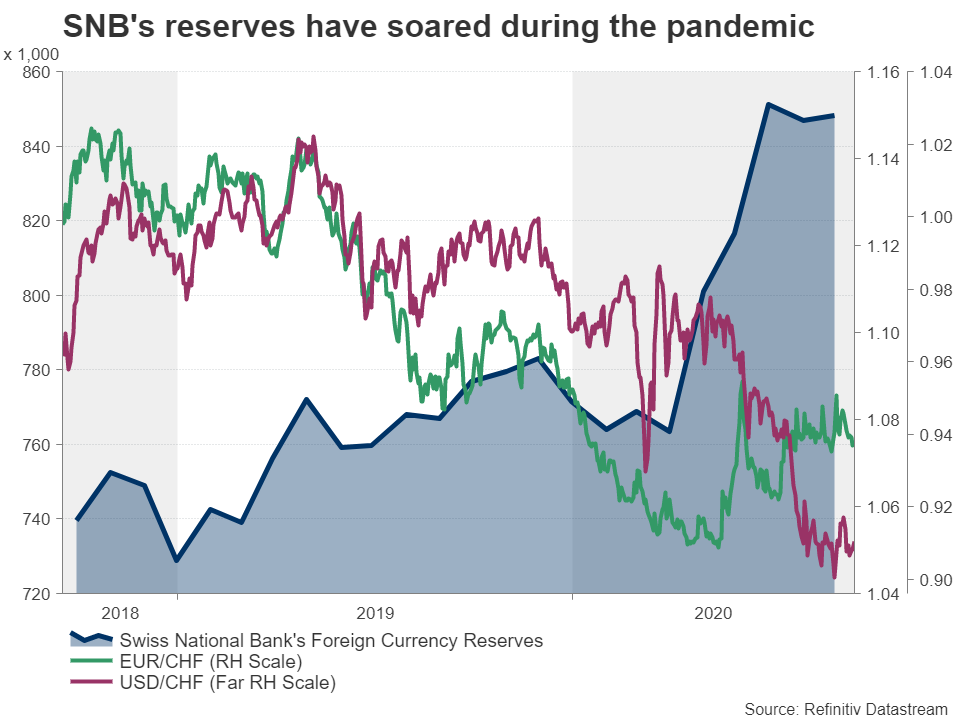 All steady at the Riksbank, Norges Bank

The SNB will not be the only central bank event in Europe over the coming week as the Riksbank and Norges Bank also meet, on Tuesday and Thursday, respectively. Both central banks are expected to hold interest rates at current levels, but the Riksbank is more likely to take a more cautious stance than the somewhat more optimistic Norges Bank. However, after the surprise expansion of its quantitative easing programme in July, which will now include corporate bonds, and the steady improvement in economic data, the Riksbank may hold off from flagging further easing measures for now.

Nevertheless, both the Swedish krona and the Norwegian crown will be sensitive to any changes in their central banks’ language, though only in the short term. Their broader outlooks are expected to stay bullish as there’s little chance of neither the Riksbank nor the Norges Bank outpacing the European Central Bank or the Fed with their respective stimulus.

But it will probably be the Reserve Bank of New Zealand policy decision that steals all the limelight. The RBNZ meets on Wednesday (local time) and is expected to stand pat. New Zealand’s economy took a slightly smaller hit than anticipated in the second quarter. However, with the country being forced into a second nationwide lockdown in August, the recovery is already on very shaky grounds.

This makes it all the more likely that negative interest rates are at the forefront of the options being mulled by the RBNZ in terms of new weapons to add to its pandemic arsenal. Governor Orr recently indicated the Bank was “actively preparing” a package of additional policy tools and may use the September meeting to hint at a possible timeline. 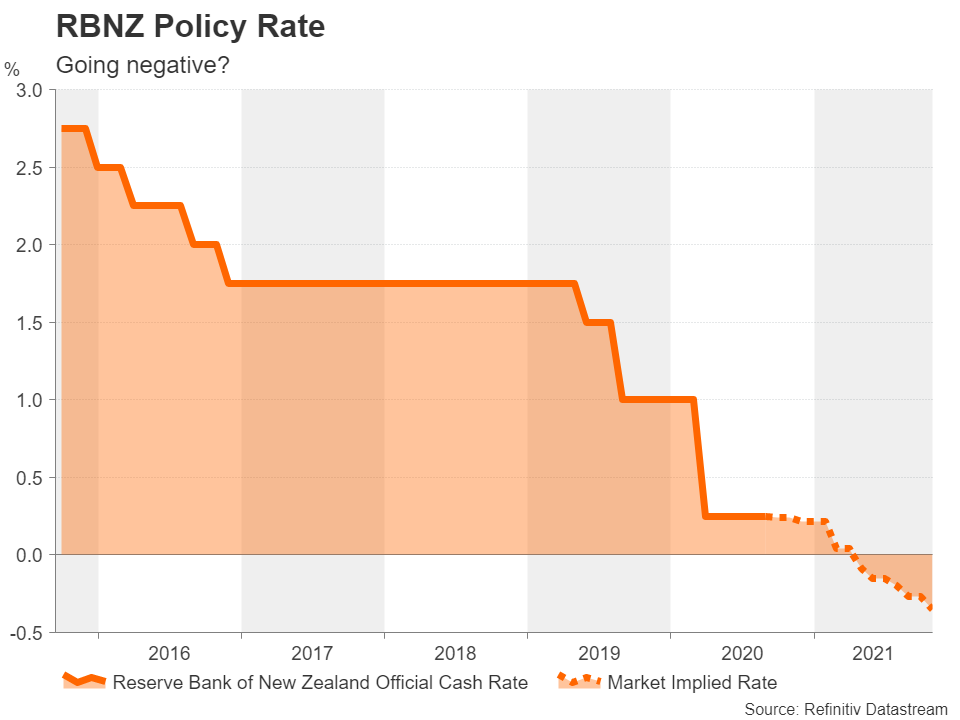 Still, considering that globally, the recovery has been generally stronger than many had initially predicted, the RBNZ may not be ready to deploy new firepower just yet and traders may have to wait a while longer for more precise signals. If this turns out to be the case, the New Zealand dollar’s uptrend should stay intact, at least for as long as the risk rally lasts, that is.

Over in the United Kingdom, it’s all about Brexit again, though investors should be able to make some room for the latest PMI prints. Unlike in the euro area where the recovery appears to be weakening, the UK’s climb out of the virus slump so far bears a closer resemblance to a V-shape. However, the rebound probably lost some steam in September as the government’s Eat Out voucher scheme came to an end and social distancing rules were toughened amid a jump in new virus cases across the UK.

The flash PMI numbers are out on Wednesday and could provide the pound with a bit of a boost if they beat the forecasts. Sterling has undergone a sharp reality check in September as tensions with the European Union flared after Boris Johnson’s latest act of brinksmanship in the post-Brexit trade negotiations. 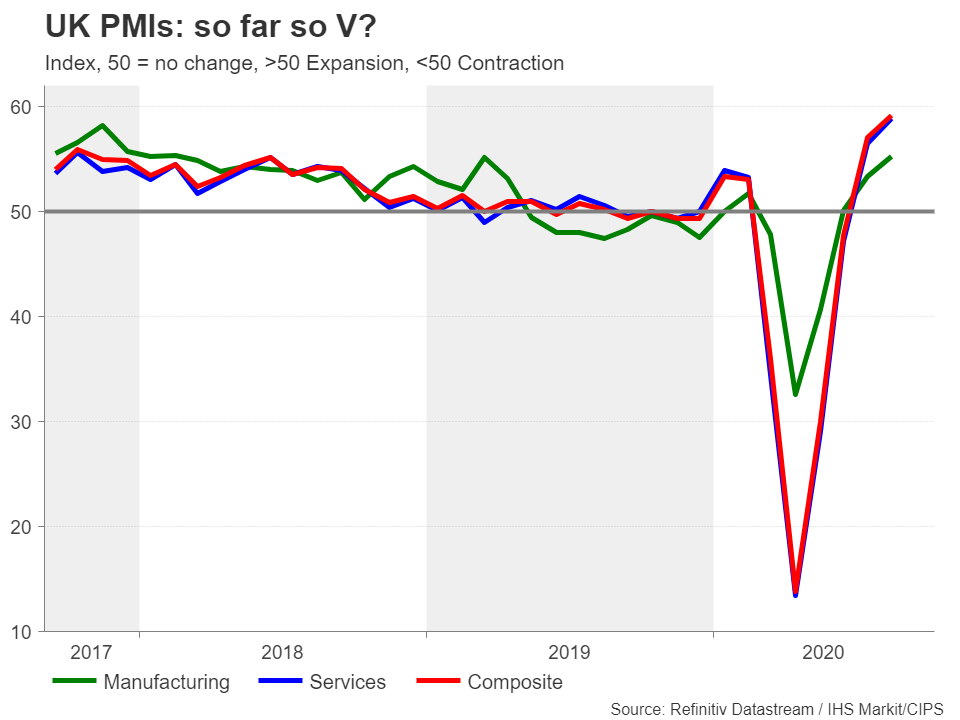 Those negotiations are ongoing and Brexit headlines could jolt the pound at any time. But despite the worryingly hostile rhetoric from London, the EU has remained at the negotiating table and there even seems to be some progress in breaking the deadlock over fisheries. Hence, the upside and downside risks for the pound are more or less even right now and traders should get used to seeing more big spikes in either direction as the October 15 deadline approaches.

There’s not a whole lot on the US calendar that could set alight the US dollar next week and unless there are some major developments on the vaccine, election or fiscal stimulus fronts, further consolidation may be the order of the day. The greenback did get quite a lift from the Federal Reserve, which stopped short of announcing additional stimulus at its meeting last week, but has since been drifting lower against a basket of currencies even though risk appetite has been in short supply lately.

Wednesday’s flash PMI reports may be the best hope to inject some life into a ranging market in the coming days. The US PMIs are released a few hours after the European ones and should they again show that the American economy outperformed the Eurozone’s, the dollar could find itself back on the front foot. 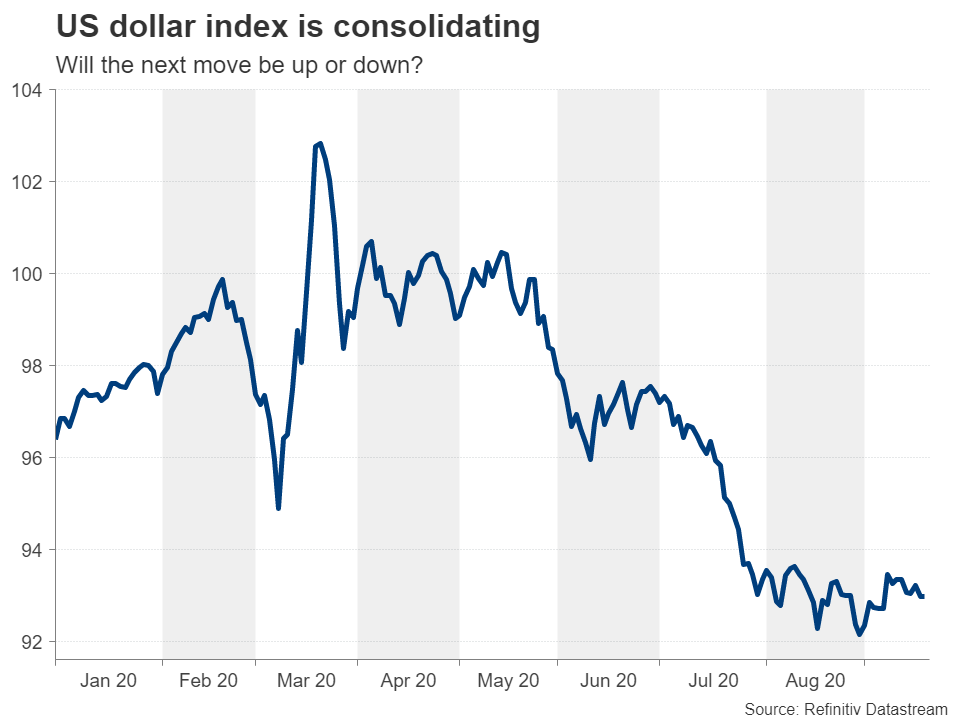 Housing data will also be watched as the boom in the interest-rate sensitive property sector has been one of the few bright spots in the economy during the pandemic. Existing home sales are due on Tuesday, followed by new home sales on Thursday. Friday’s durable goods orders for August will be important too.

Overall, though, with Election Day nearing, markets are increasingly in a wait-and-see mode and the data may only trigger knee-jerk reactions at best.

But the vote for electing a new American president on November 3 is not the only reason why the next 2-3 months will be a decisive time for the markets. Congress has yet to reach a compromise on a new fiscal stimulus package and there is a slim chance a deal can be made in the next week or two. Otherwise, it will most likely have to wait until after the election.

In addition, announcements on a coronavirus vaccine could be imminent, which are potentially the dollar’s biggest threat (though a much-needed lifeline for the stock market rally). All of these things could determine whether a fresh round of monetary stimulus will be necessary before the year-end. The question is, until one or more of these stories begin to unfold, will markets stay calm or will they have a panic attack?