Germany will publish its preliminary GDP growth readings for the first quarter on Friday at 06:00 GMT. Although the Eurozone’s initial estimates have already revealed a 3.8% contraction for the aforementioned period, markets could still pay some attention to the German numbers as a concerning report out of the largest EU economy could calm Berlin’s skeptical response to the EU’s coronavirus stimulus policies that are so desperately needed by the most-infected member states.

Political diversity is the main headwind in the EU

Berlin is in battle with Brussels after opposing the idea of a common debt instrument issued by the European Commission with the scope to raise funds and benefit mainly the countries that have been the hardest hit by the Covid-19 pandemic. While the German Chancellor has been backing the option of a group funding plan even though there is disagreement on how this could be settled, the conflict between the sides further escalated after the German legal body also deemed illegal the European Central Bank’s 2018 scheme of buying government bonds. The latest move, which is the first in the EU’s history, is now threatening to terminate the Bundesbank’s participation in the bond-buying program as the ECB is not planning to respond, while the EU could sue the German government over jeopardizing the bloc’s legal unity.

All in all, the main point is that the above war of words is delaying the bloc from providing an appropriate aid package to its member states and hence is reducing the odds of the so desired V-shaped recovery on time as other major economies are already putting their massive financial rescue plans in action. EU leaders approved last month a short-term package of 540 billion euros which is scheduled to be launched on June 1, including a compensation package to employers, a loan program to small and medium-sized companies by the European Investment Bank, and funds to Eurozone economies through the European Stabilization Mechanism (ESM). However, with medical laboratories unable to find an effective cure for Covid-19 so far and the risk of a second virus wave lingering in the background as governments are gradually lifting lockdown measures, the EU should be prepared to release more stimulus by creating a longer-term tool to support the bloc.

The current political situation, though, is not ideal for such discussions to move forward unless the EU’s economic status worsens to the degree where it motivates the biggest financial contributors such as Germany to finally pull efforts for the sake of keeping the whole bloc on a healthy trajectory. Flash GDP growth data showed in late April that the Eurozone shrank by 3.3% on a yearly basis and 3.8% versus the previous quarter in the first three months of the year, but this may not be the bottom of the downfall as the European Commission expects a larger depression in the coming quarters that may mount to 10% if a second virus wave pops up in the winter, while a deeper downfall of 15.5% is projected in the worst case scenario where lockdown measures resume.

Germany to shrink the most since financial crisis, but could it quickly recover? 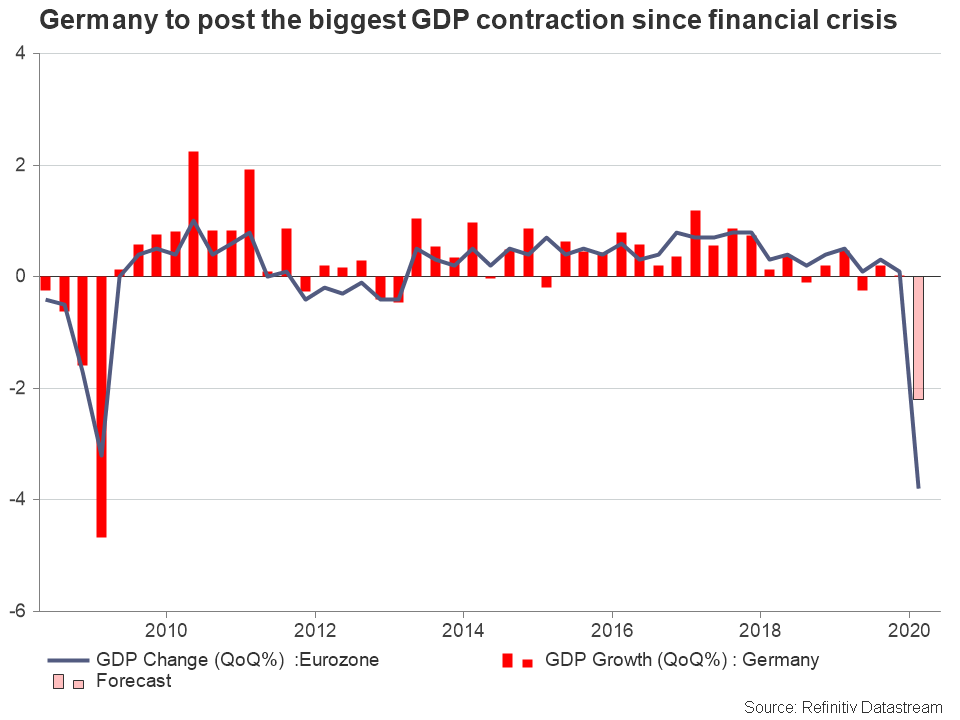 It has been said that Germany, which is expected to exhibit a 1.6% yearly contraction in Q1 and a quarterly loss of 2.2% on Friday – the largest since 2009 financial crisis – may fully recover its output by the end of the year. However, we should not forget that the pre-virus economic picture was not bright at all as the country was unable to print any growth above 1.0% y/y during 2019 thanks to the trade war and the environmental restrictions in the growth-leading auto industry. Hence, questions are rising about whether Germany will be able to emerge stronger from the health crisis especially if the manufacturing sector fails to quickly bounce back and instead prints a U-shaped or even an L-shaped recovery. According to the German automaker BMW, a rapid rebound is unlikely as the company believes that the situation may only start to stabilize in the third quarter of 2020, while US bank Citigroup’s basic scenario is suggesting an eight-quarter duration for Western European factory revival. 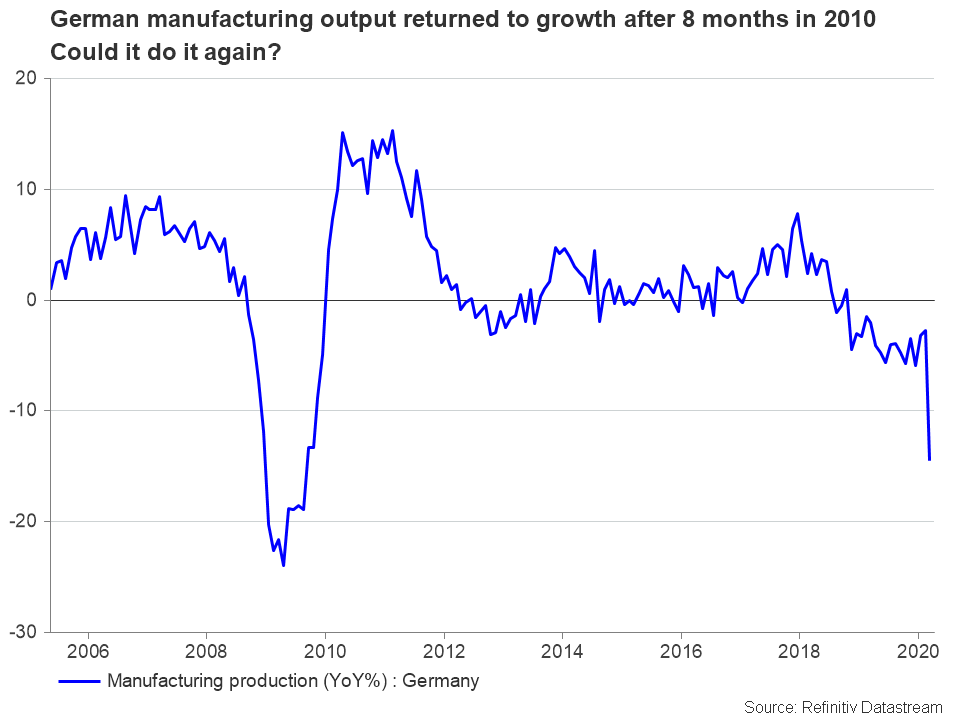 Given the above concerns, a worse-than-expected GDP reading out of Germany on Friday could pressure German lawmakers to relax their strict judgment on EU’s policies, keeping some floor under the battered euro if the country indeed shows some willingness to collaborate in the near future. Otherwise, an upside surprise in the numbers may strengthen Germany’s negotiating position, prolonging its dispute with Brussels.

Looking at EUR/USD, it is currently trying to further expand above 1.0800 after finding support within the 1.0700 region once again. From a technical perspective, the pair needs to successfully surpass the 20-day simple moving average (SMA) and close above the 1.0890 barrier in order to retest the 1.0950-1.0980 resistance region.

Alternatively, a pullback below 1.0830 may bring the 1.0770 support zone back into view, and if this fails to hold this time, the sellers could next take a breather near the previous low of 1.0726 before driving towards the 3-year low of 1.0635.

Meanwhile, Eurozone’s second estimates of Q1 GDP released on the same day at 09:00 GMT will be closely watched for any revisions, while the bloc’s industrial production for March could grab some attention on Wednesday at 09:00 GMT.