Google parent, Alphabet Inc., is expected to announce a drop in second quarter revenue when it publishes its earnings results on Thursday after the market close. The slump in online advertising brought on by the coronavirus pandemic probably dealt a blow to Alphabet’s largest revenue stream in Q2. But with the Company continuing its efforts to diversify its business, an earnings beat is possible, potentially boosting the stock, which has lagged its peers in the tech rally.

Alphabet’s share price is up a respectable 12% in the year-to-date. Yet, compared to many of its peers in the tech sector, those gains are dwarfed by Amazon.com’s 60% surge and Apple and Microsoft’s close to 30% rally. The underperformance might seem puzzling when considering the boost to online platforms from the virus crisis, but not entirely surprising given that Alphabet still derives about 80% of its revenue from advertising, and the pandemic hasn’t been too kind on ad spending. 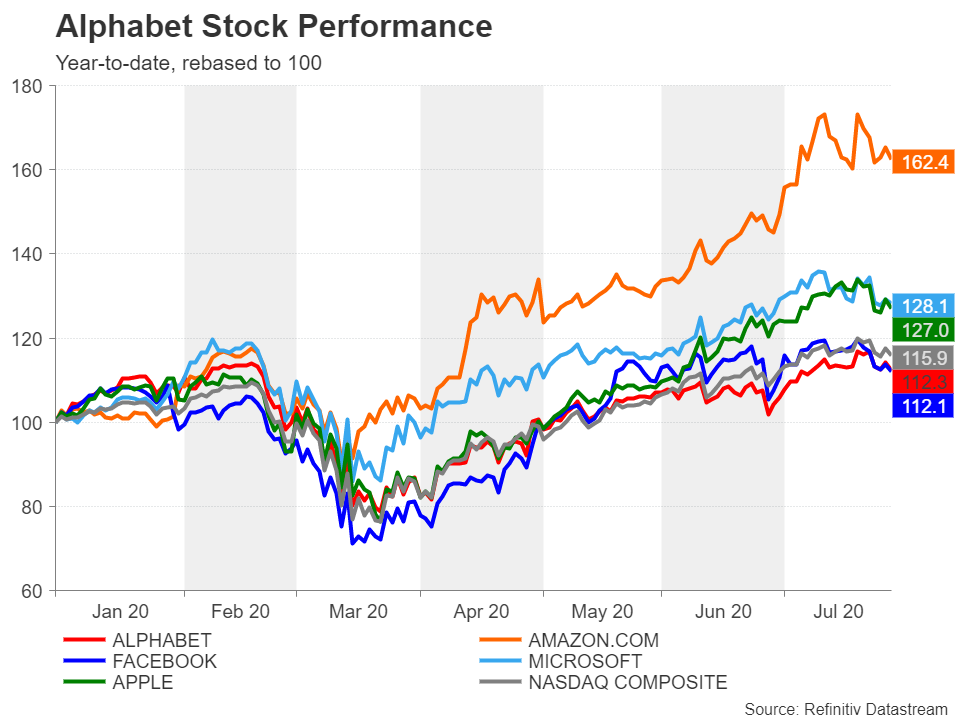 Social distancing measures may have accelerated the shift to digital, but as with all downturns, advertising is an obvious expense for a business to cut back on when turnover is down, and online advertising is no exception. Alphabet has been trying hard to reduce its reliance on Google Search for its revenue source and although it has had some success lately in generating alternative income streams, mainly from its cloud division and YouTube, it has a long way to go before it can claim success.

Looking at the June quarter, Alphabet is expected to report a 4% annual drop in revenue to $37.39 billion, down from $41.16 billion in the prior quarter. Advertising revenue is forecast to have fallen by 7.7% year-on-year to $30.09 billion, which would confirm that the segment is the main drag on income but also indicate strong growth elsewhere. Earnings per share (EPS) are expected at $8.20 according to I/B/E/S Estimates by Refinitiv, down 42.3% y/y and follows a 17.1% y/y decline in Q1 when the pandemic first started to hurt the Company’s top line. 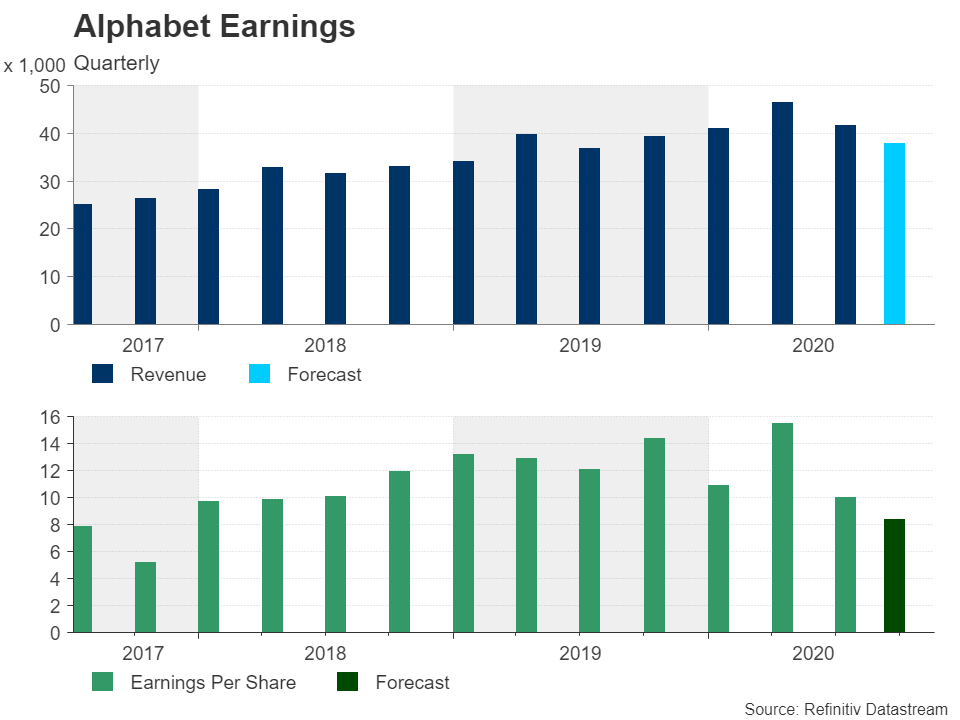 Alphabet stock is currently hovering around the pre-pandemic top of $1,530, having fully recovered from the virus-induced selloff. An earnings beat could help the price to revisit its all-time high of $1,587.05 set on July 21, before aiming for the 138.2% Fibonacci extension of the February-March down move at $1,730.

To the downside, the stock could initially find support at the 50-day moving average (MA) near $1,460 if the results disappoint. A breach of that support would open the way for the 200-day MA at $1,355.

Overvalued, but maybe not much

With many analysts having become overly pessimistic about the Q2 earnings season and signs that the slump in digital advertising has bottomed out, a positive surprise is more likely than not on Thursday. When adding the relative ‘cheap’ valuation of the stock into that equation, the price could jump from a significant beat.

Alphabet has a trailing 12-month price/earnings (P/E) ratio of 33.6, slightly above the median of the Nasdaq Composite (31.1) but well below the 50.7 figure of the tech sector. The 1-year forward P/E multiple fares only slightly better at 30.5, though it is substantially above that of its peers (19.4). 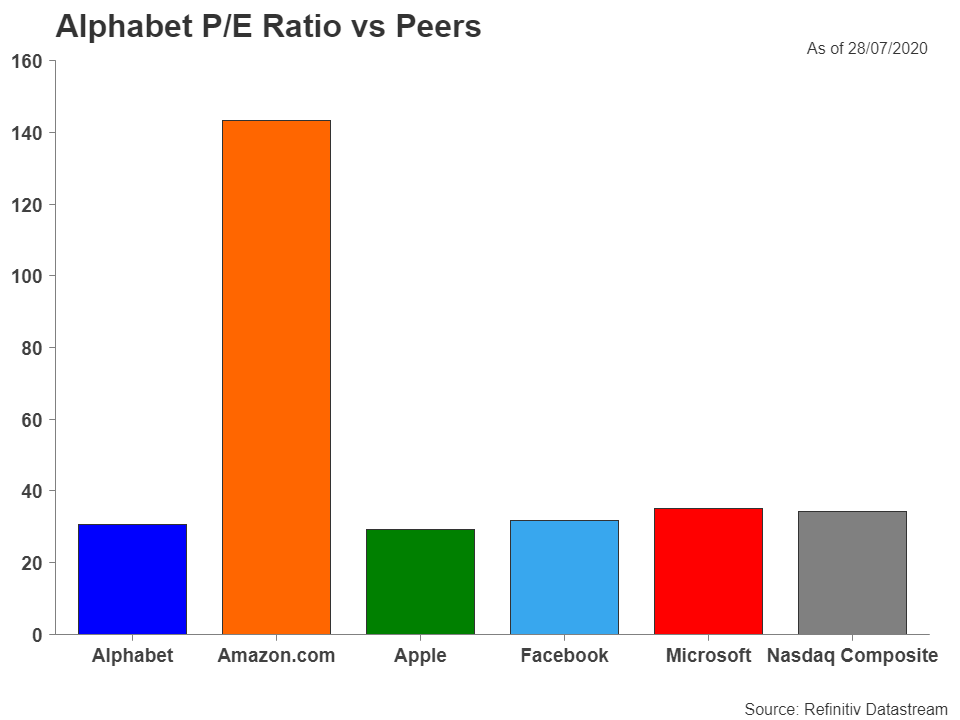 However, with some other big tech names reaching extreme valuations recently, Alphabet shares may have greater scope for further gains, especially if CEO Sundar Pichai gives investors enough reason to be excited about in his earnings call. The growth of the Google Cloud and YouTube divisions will be of particular interest as the Company has been pushing hard to expand these businesses. Updates on Waymo (the self-driving unit) and Google Shopping, which recently announced it is scrapping the fees it charges for retailers, will also be eagerly anticipated for a better insight on future revenue expectations.

For now, analysts remain bullish about Alphabet stock, maintaining their ‘buy’ recommendation and raising their median price target to $1,625 per share.