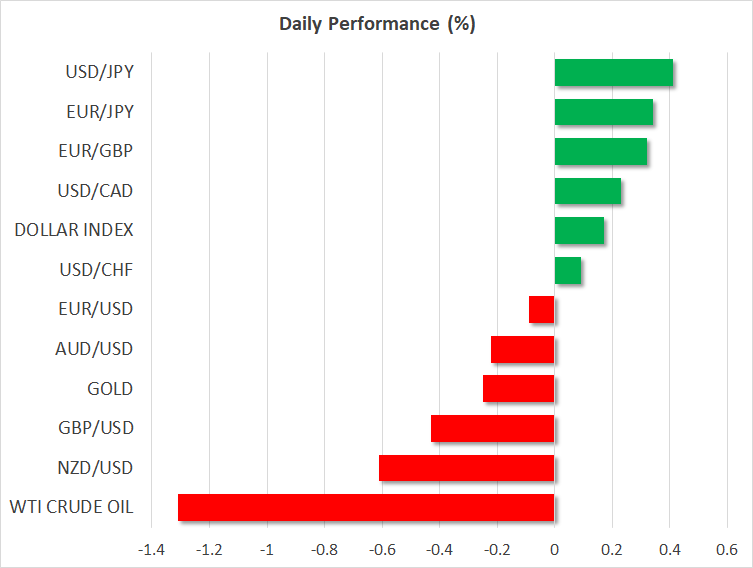 Sentiment was subdued on Friday as investors struggled to get an accurate reading on the US economy as well as on the Fed’s intentions about the pace of monetary tightening. A flurry of housing data is clearly pointing to a slowdown in the sector, manufacturing activity seems to be diverging in different parts of the country, while there’s some signs that the recent cooling of the labour market is coming to an end.

Even the Fed appears to be having a hard time making sense of the data as policymakers are having doubts about what the pace of rate hikes should be going forward. The Fed’s arch hawk, James Bullard, is advocating another 75-bps increase in September but the San Francisco Fed’s Mary Daly is wary about overtightening.

Fed fund futures currently point to a slightly higher probability of a 50-bps hike in September than a 75-bps one. But those odds could change next week when Fed officials will gather in Jackson Hole, Wyoming, for their annual symposium where Chair Jerome Powell is set to give his first remarks since the July FOMC meeting and the first since the soft CPI report.

But despite signs of a potential split emerging within the FOMC about how high rates should go and some visible cracks in the economy, a full-blown recession still seems some way off and policymakers’ resolve to contain inflation is indisputable.

This is why Treasury yields have been able to recover from their lows ploughed at the start of the month, giving the US dollar, which has been benefiting from renewed safety flows, an extra helping hand.

The dollar index is currently scaling fresh one-month highs and on track for weekly gains of almost 2%, crushing its rivals in the process.

Brutal losses for aussie and kiwi, euro and pound crushed too

The euro, marred by fears of energy shortages in the coming months, has slipped below $1.01 to one-month lows, while better-than-expected retail sales numbers out of the UK this morning have been unable to prop up the pound, which just breached the $1.19 level.

Investors remain deeply gloomy about the prospects for the UK and Eurozone economies as the steady surge in natural gas futures since June has taken European gas prices to record highs this week.

The worst performers of the week, however, have been the antipodean currencies, with both the aussie and kiwi headed for losses of more than 3%.

Worries about flagging growth in China and disappointment at policymakers’ response to the slowdown have been one of the main contributors to this week’s risk-off tone, weighing heavily on both the Australian and New Zealand dollars.

But under the circumstances, equity markets have once again proved resilient to the negative headlines. The losses in Asia and Europe have been limited, while the S&P 500 is on track to finish the week flat, having hit a four-month top only on Tuesday.

Oil and gold back under pressure

In commodities, oil remains under pressure despite some support from a much bigger-than-expected drawdown in US crude inventories. The bleak economic outlook in Europe and doubts about the US and Chinese economies are keeping oil futures within their bearish channel even though there’s been no change to the tight supply picture.

Gold’s rebound, on the other hand, has faltered amid the dollar’s resurgence this week and the spike in bond yields. The precious metal briefly flirted with the $1,800/oz level last week but it has since retraced to around $1,750/oz.