The Turkish lira fell to a new record low this week, despite the nation’s central bank burning through its FX reserves in recent months to keep it from crashing. Inflation is still in the double digits, the current account deficit is exploding, and policymakers are pumping the economy with cheap credit again – which is a classic recipe for currency depreciation. Unless interest rates are raised or capital controls are introduced, more pain is likely in store for the battered lira.  Under pressure

The past few years have been a difficult period for the Turkish currency, and things have unfortunately not calmed down in 2020. The lira hit an all-time low against the dollar in May, then against the euro in July, and then plunged to fresh record lows against both currencies this week.

This is not a new phenomenon. The lira has been in a broader downtrend for two decades now, though the pace of the currency’s collapse has accelerated in recent years as a cocktail of worrisome economic developments has caused capital to flee the country.

The main issue that has devastated the lira is double-digit inflation. High inflation erodes purchasing power and is anathema for currencies. Even after the pandemic, when inflation would naturally sink because of lower demand, Turkey’s inflation rate still clocked in at almost 12% in July – more than double the 5% targeted by the central bank. 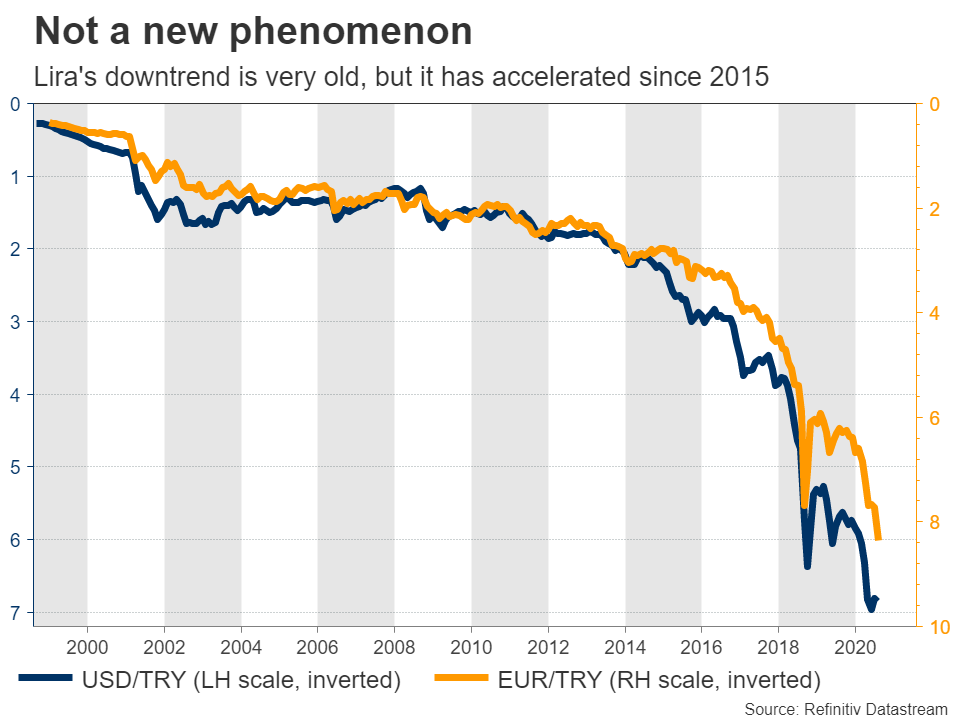 To make matters worse, Turkey also runs a chronic current account deficit. That basically means the nation is a net borrower, importing more than it exports and relying on capital flows from abroad to finance the difference. The problem is that if these capital flows dry up or foreign investors decide to withdraw their investments, this begins to exert massive downward pressure on the currency.

Additionally, both the government and the private sector have high levels of debt in foreign currencies, which become much harder to pay back with a depreciating lira.

In a situation like this, the central bank would typically raise interest rates to rein in inflation, stabilize the current account deficit by attracting more foreign capital, and defend the currency. Of course, this is a painful process. Higher rates would slow down borrowing, hit demand, hurt economic growth, and even risk an increase in unemployment.

Even though the central bank did raise rates dramatically in 2018 to avert a full-blown currency crisis, it has since lowered them again by more than 15 percentage points, to 8.25% currently. That’s a tricky endeavor. It’s basically a gamble, where policymakers are trying to boost growth at all costs, by incentivizing another borrowing boom and allowing inflation to soar.

The gamble is whether their FX reserves will be sufficient to keep the lira from collapsing while they attempt to boost growth. Foreign reserves naturally run out when you are constantly trying to defend a currency, and Turkey has been burning through its own at a furious pace. 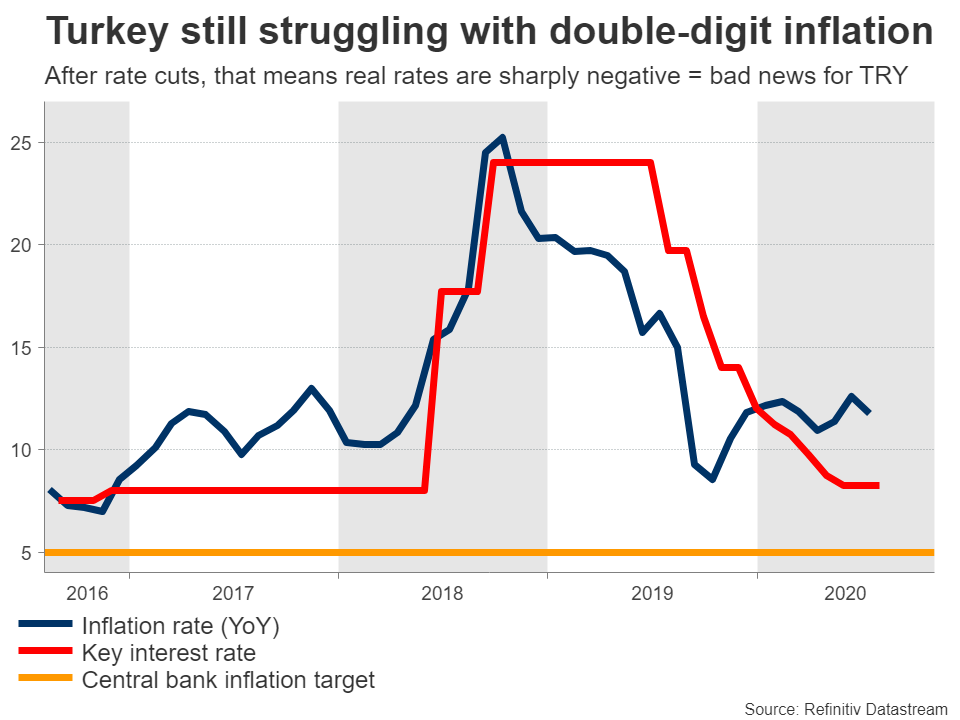 What’s the point of all this? Since inflation exceeds interest rates so dramatically, Turkey has some of the most negative real interest rates globally, which is really bad news for a currency over time. Why would foreign investors put capital into a Turkish bank, where they might earn 9% interest, when inflation is running at 12%? That implies a loss of 3% per year, which is unlikely to attract foreign capital, and if anything, might push investors to leave Turkey altogether.

What can be done?

In the short term, there are two methods that could halt the lira’s slide, but admittedly, neither is likely to be implemented.

The first would be to raise interest rates again. But the central bank doesn’t want to do that. We are in the middle of a crisis, which will naturally hurt the economy, so their main priority is to stimulate growth at all costs, even if that means higher inflation and a weaker currency. Plus, there may be some political pressure involved, as President Erdogan has long been a critic of high interest rates, even describing them as “the mother and father of all evil”.

The second would be introducing strict capital controls. It looks bad, as it tarnishes an economy’s credibility and might incite panic among foreign investors, but if you are trying to stop a currency crisis, it works. That option however has been repeatedly ruled out by the nation’s finance minister, who is also President Erdogan’s son-in-law.

What’s most likely then?

In a nutshell, the lira will likely be allowed to depreciate. The central bank has already burned through most of its FX reserves, and lately, it has been spending reserves it has borrowed from local banks to support the currency. It has also resorted to more ‘questionable’ methods, such as making it more difficult to short the lira in the markets. 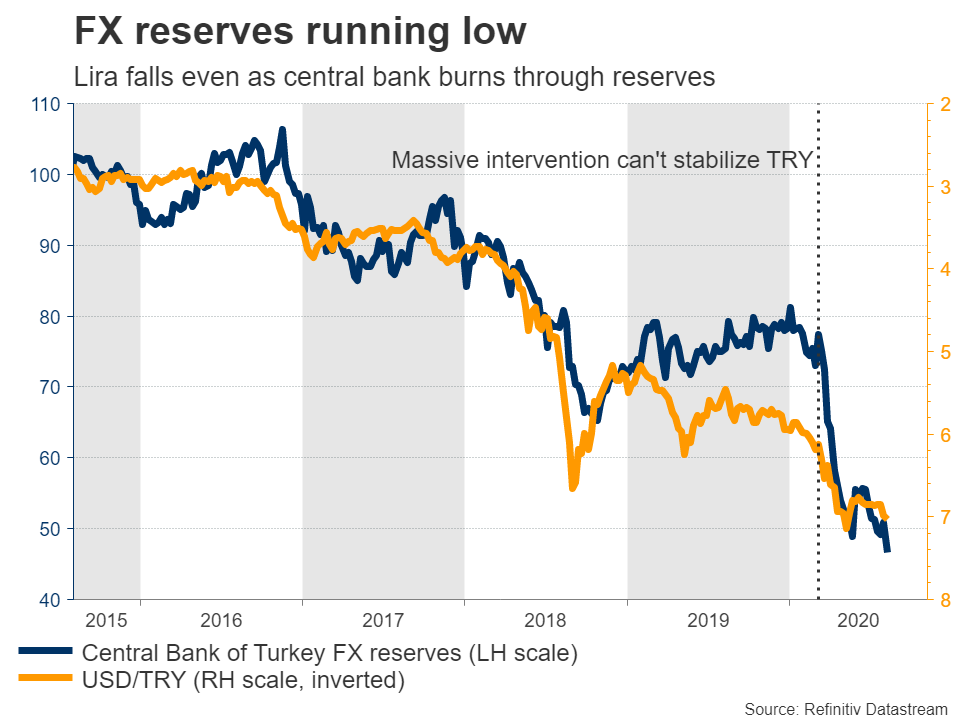 But these tools look exhausted. The lira wouldn’t be hitting new record lows against a US dollar that is weak itself, if they were effective. So it’s either rate hikes, capital controls, or allowing the currency to depreciate further. A currency can’t resist economic gravity for long.

At some point, the central bank will probably be forced to raise rates. But for that to happen, the lira probably has to experience more pain first, leaving policymakers no choice.

Beyond the lira – mind European banks and the euro

In the bigger picture, if Turkey indeed faces a new currency crisis, that could also be bad news for the euro. European banks are exposed to Turkey, much more than American banks, and if the situation worsens they might have to take losses on those operations.

The European banking system is still tormented by the legacy of the euro crisis, and with the pandemic likely to cause another spike in non-performing loans, any Turkey-related worries may spill over into the euro. Of course, this is a minor factor, but it may play some role in slowing down the recent uptrend in euro/dollar.