Worries about a looming recession are dragging stock markets lower again. There’s a raft of data on the way that could lessen or heighten those concerns, most notably, the latest jobs report in the United States. But even if there is some possibility of positive relief from next week’s releases, central banks pose a downside risk to sentiment. The minutes of the Federal Reserve’s and European Central Bank’s policy meetings will likely reiterate their hawkish stance, while the Reserve Bank of Australia is expected to deliver another double rate hike.RBA to raise by 50 bps; can it go bigger?

In May, the RBA began its rate hike cycle in earnest, lifting the cash rate by a total of 75 basis points. It is widely expected to follow up June’s 50-bps increment with a similar move at its July meeting on Tuesday. Given all the panic about the surge in inflation globally, a bigger rise cannot be ruled out as policymakers are in a rush to front load as many rate increases as they can now while their economies are on a solid footing. 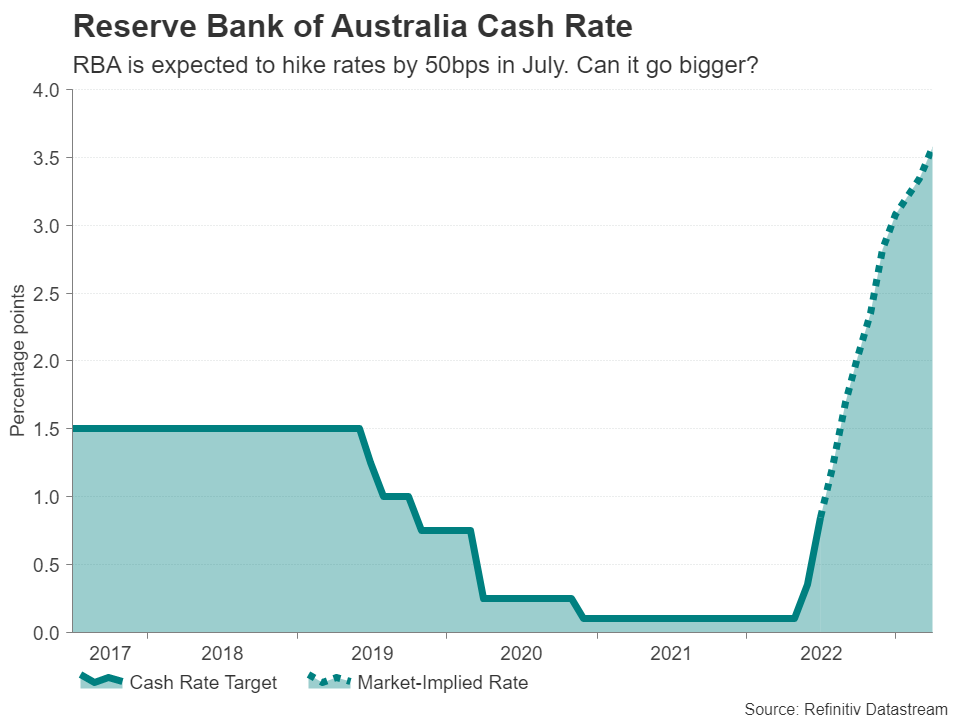 However, rate hike bets in money markets have cooled lately as investors are becoming more wary about the need for aggressive tightening by central banks amid all the pessimism about the growth outlook. A 50-bps rate rise by the RBA was almost fully priced in just over a week ago, but expectations have now fallen to about 85%.

With markets so fearful about a recession, a hawkish surprise would probably only modestly boost the risk-sensitive Australian dollar. The currency is back testing the key $0.68 level and its best chances of re-establishing a foothold above $0.70 is if risk appetite bounces back. Next week’s mid-tier data (building approvals are due Monday and the AIG services index is out Wednesday) are unlikely to offer much support either.

There’s just no keeping the US dollar down these days as the world’s reserve currency can’t hide its haven appeal at a time when there’s so much doom and gloom about sky-high inflation and the real risk of a major economic downturn. One of the pivotal moments for investor sentiment has been signs that consumption in America has already started to soften and businesses are scaling back some of their hiring plans.

Friday’s all-important nonfarm payrolls report will probably confirm this trend. The US economy is expected to have added 295k jobs in June, slowing from May’s print of 390k. The unemployment rate is projected to hold steady at 3.6% and average hourly earnings are forecast to maintain monthly growth of 0.3%, which would point to real wage growth remaining negative in June in a further red flag about future spending. 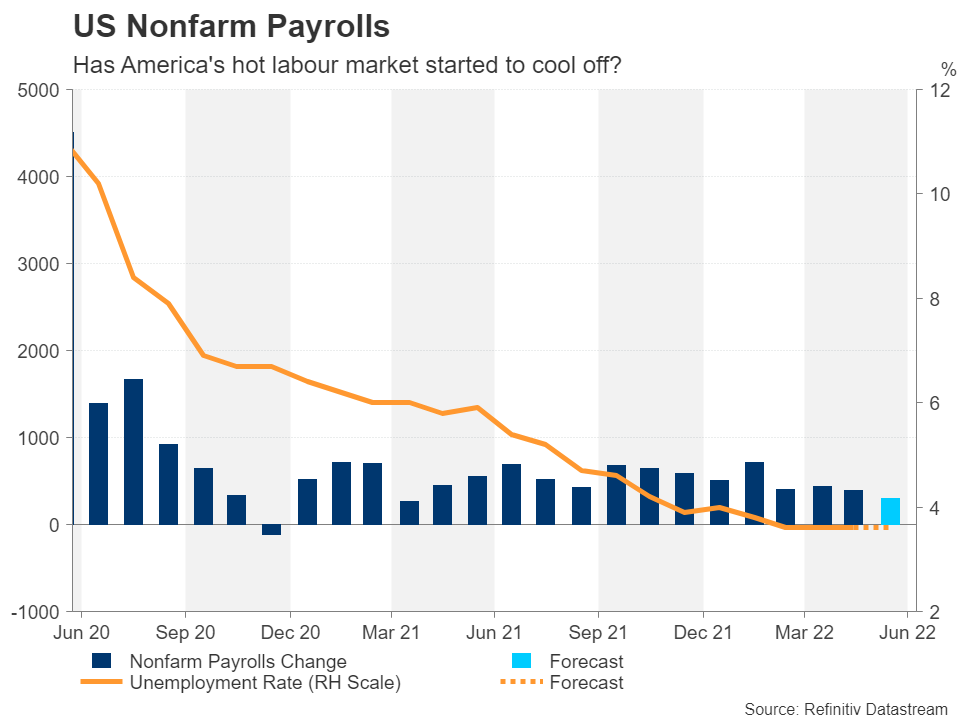 A day earlier, the ADP private employment report will be watched for clues as to what to anticipate on Friday. The ADP figures are normally released on a Wednesday but will be delayed next week due to US markets being shut on Monday for Independence Day. Factory orders (Monday) and the JOLTS job openings (Wednesday) will be eyed too.

But aside from the NFP data, a more crucial indicator for traders is the ISM non-manufacturing PMI for June due Wednesday, as they will want to gauge the impact of the Fed’s recent hefty rate increases as well as oil’s resurgence in late May/early June on business activity and cost pressures.

In the current climate, the dollar could find support whichever way the data go, but there is a danger that markets may get caught off guard by the FOMC minutes that will be published on Wednesday. Investors have priced out about 50-bps out of the Fed’s tightening cycle, bringing forward the date at which rates are expected to peak as recession fears have intensified. Not only that, but they are also anticipating that the Fed will begin cutting rates as early as the second half of 2023. 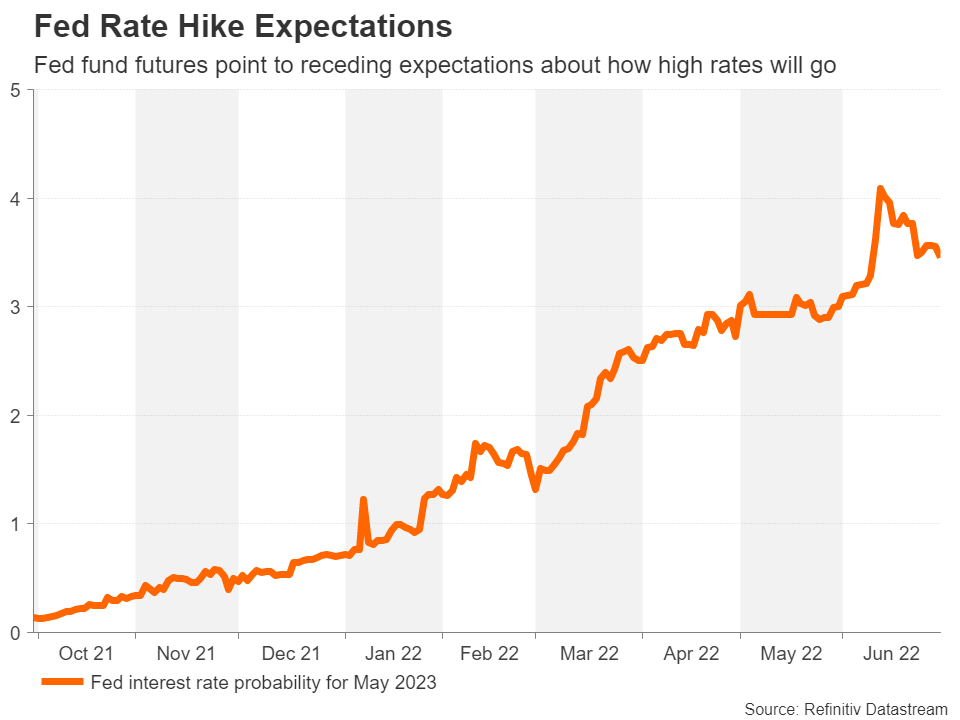 However, the message from Chair Powell has been pretty clear – inflation is their number one priority. Hence, growth jitters won’t deter them from moving aggressively just yet and so the minutes of the June meeting could provide a bit of a reality check for traders thinking that the Fed will balk at the first sign of trouble.

The Canadian dollar is one of the better performing currencies of 2022 so far, and although it has been on a steady downtrend versus the greenback for the past year, it has logged impressive gains against most other majors. One of the reasons for the loonie’s relative strength is of course the big rally in oil prices as the commodity is Canada’s largest export. The other is the tight labour market. 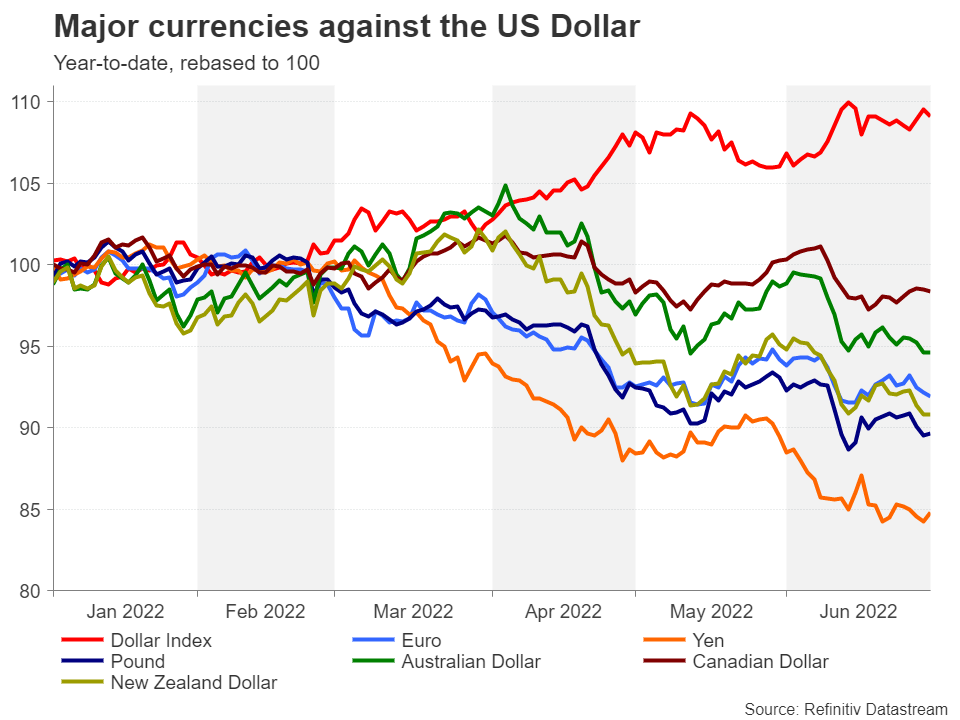 That puts the Bank of Canada in a position to match the Fed in its hawkish rhetoric and a 75-bps rate hike is almost fully priced in for the next meeting on July 13.

Unless there is a massive miss, the June employment numbers out on Friday are not anticipated to alter those expectations significantly. Yet, the loonie might find it difficult to navigate through stormy seas if the market mood doesn’t perk up in the coming days.

In the euro area, the ECB is prepping a new tool to keep periphery yield spreads down before it kicks off its first rate rise in more than a decade in July. But investors have doubts and they remain nervous about how tighter policy will affect not just Eurozone yield spreads but the broader economy as well.

The flash PMI readings for June raised some alarm bells about slowing growth in the euro bloc. Any revisions to the final services PMI on Tuesday will be carefully scrutinized. May retail sales figures on Wednesday might attract some attention too and German industrial output data on Thursday could also sway opinion on recession risks.

However, in an otherwise quiet week, the account of the ECB’s June meeting on Thursday could be a more important driver for the euro. Several ECB policymakers are pushing for rate increases of 50-bps or higher for the subsequent meetings after July and the minutes might offer some insights as to how widely this view is shared among Governing Council members.

The question for the euro is, would hawkish sounding minutes bolster or weaken it? If optimism continues to fade, aggressive rate hike talk is more likely to hurt the single currency against the likes of the dollar and Swiss franc. 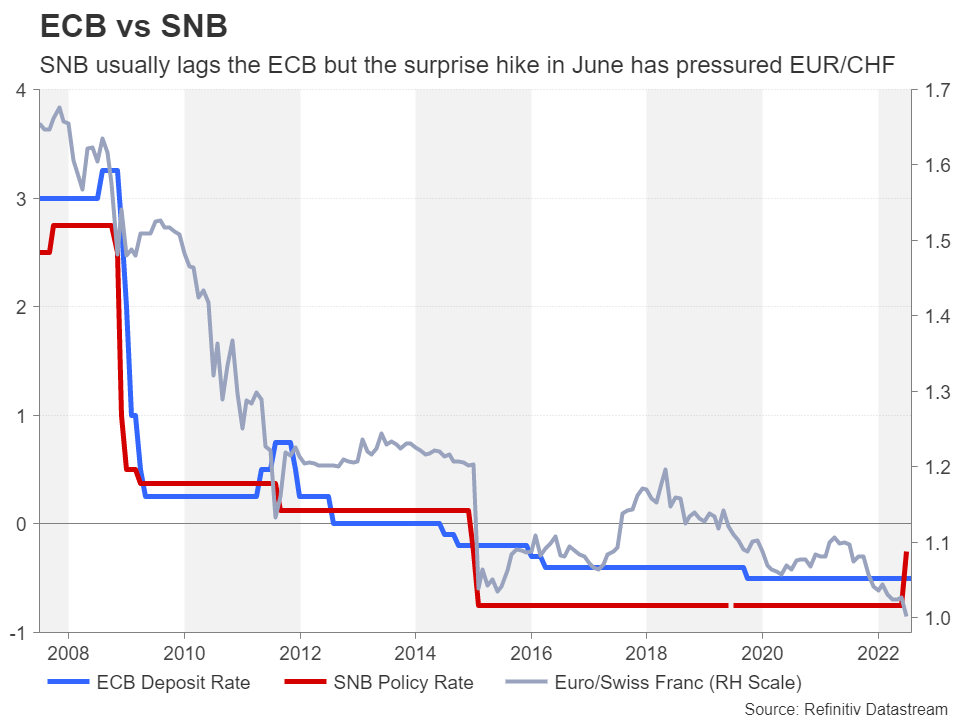 The euro just broke below parity versus the franc for a second time this year, hitting 7½-year lows, as the Swiss currency is benefiting from the combination of safe-haven flows and the SNB’s unexpected early liftoff.

CPI numbers for June out of the Alpine nation on Monday will be monitored for any acceleration in inflation as investors are trying to decipher for how long SNB rate increases will outpace the ECB’s.