In times of a strengthening euro, the region’s exporters could be hurt as sales generated outside of the eurozone may translate poorly back into earnings reports denoted in euros. The biggest export countries with the least exposure to the single currency zone could be dented the most. Germany and Italy are some of the world’s largest exporters, yet they have the smallest amount of exports delivered within the eurozone. By contrast, the Netherlands outperforms them with more than 50% of revenues generated within the region.

With about $1.3 trillion in exports, Germany ranks third among the world’s largest export countries, behind China and the US. That translates to almost half of its annual GDP. The US is its largest single country-market as 9% of its products get delivered there. While Germany’s exposure to the eurozone is high, standing at about a third of its total exports, the share is still among the lowest compared to its large peers. Germany delivers about 6% of its exports to China. 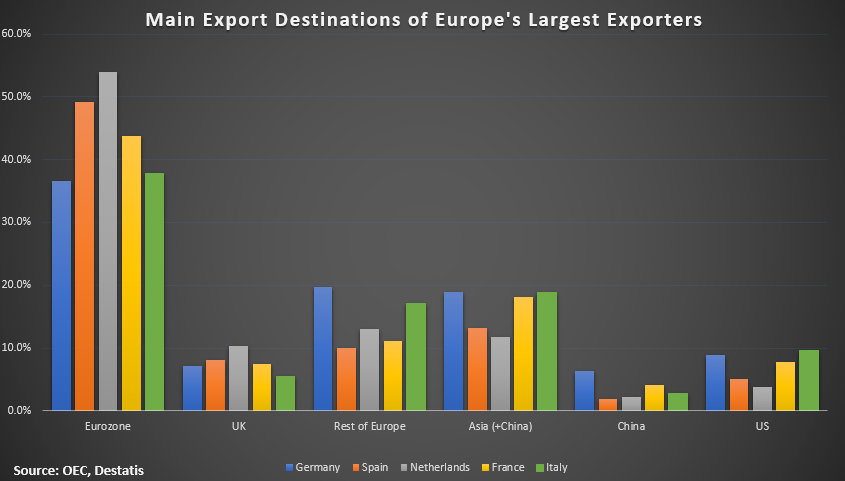 The recent strengthening of the euro against the currencies of the US and China could harm some of the large exporters that report in the single currency. The euro rose 12% against the dollar this year while it is 8% higher versus the yuan. More importantly for exporters, looking at the average value of quarterly periods we can note that the average value of the euro thus far in the third quarter is 4% higher against the dollar and 5% higher against the yuan when compared to the average value of the third quarter of 2016. Due to the rally in the greenback following last year’s November presidential elections, the fourth quarter could be especially arduous for euro-reporting exporters even if the common currency stays at the current levels. Comparing the average exchange rate thus far in the second half of the year versus the whole of the second half of 2016, we can note that the average euro/dollar pair and the euro/yuan is 6% higher.

Looking at individual German companies, Volkswagen Group, Daimler, BMW, Siemens and Bayer are the largest exporters. Daimler reported a 3% boost to its top-line during 2016 on the back of the weaker euro against some currencies the company exports to. Its largest markets comprise of the US (26% of group revenues is generated in the US) and China (10% of group revenues). BMW had around a 2% translation boost to its 2016 revenue. The group generates 17% of its total revenues from the US and 18% from China.

Luxottica is one of Italy’s largest export companies with only about a quarter of its revenues coming from Europe. North America is its largest market with almost two-thirds of group revenues generated there. During the first half of the year, the company had around a 2.5% revenue lift from the translation effect when the average value of the euro/dollar pair was 3% down. However, with the euro strengthening, especially against the dollar towards the end of the year, the company could face strong headwinds.

Looking at countries that have the largest eurozone exposure, the Netherlands comes first. This provides a cushion for the country and its exporters in times of an appreciating exchange rate. The Netherlands also has the highest share of its exports delivered to the UK compared to its peers. While this was bad in the first six months of the year, the second half could improve due to the annualization of the weakness in sterling following the plunge last June after the Brexit referendum.

Spain ranks second and France third in their export exposure to the eurozone, among analyzed countries.

Apart from exporters, all tourism dependent businesses within the eurozone could feel a pinch. Chinese tourists, the world’s largest outbound nation, tend to use the strength of the yuan against the currency of a potential destination as one of the criteria when choosing their next travel location. During the summer of 2015, many tourism dependent businesses saw a revenue lift due to a surge of Chinese visitors. During 2015, the average value of the euro/yuan pair fell 15% versus the average value of 2014, luring mainland visitors.

Should the European Central Bank give a sign it will start tightening monetary policy within the eurozone at its next meeting, the euro could strengthen further. Many economists are predicting that the euro could easily hit the level of 1.20 by year end. However, recent economic data out of the US has instilled confidence that the Federal Reserve will hike interest rates once again this year that boosted the dollar. Even if the euro doesn’t strengthen further, the current levels against major peers are still significant enough to dent sales via negative translation effect.