While the aussie is at the edge of a cliff, fighting hard to avoid a broad outlook deterioration versus its US counterpart, Australian GDP growth figures for the September quarter are expected to show a dull economic performance. Traders, however, may not rush to sell the aussie unless the US nonfarm payrolls report intensifies the debate for higher interest rates.Australian economy to lose pace in Q3

The Australian dollar has been in freefall during the month of November, losing almost 5.0% against the US dollar as the strength in the greenback, a dovish stance from the Reserve Bank of Australia, and more recently a new spike in covid infections weighed on the risk-sensitive currency.

The pair is currently hovering near the bottom of its 2021 downtrend around the 0.7100 level, a break of which could spark a more aggressive sell-off towards 0.6990. Theoretically, worse-than-expected GDP growth data could trigger that break this week, but Australia has recently abandoned its 200-day long zero-covid measures, brightening the economic outlook for the rest of the year.

Hence, although forecasts point to a quarterly contraction of 2.7% in the three months to September and a relatively muted annual growth of 3.0% versus the whopping 9.6% expansion in the previous quarter, traders could adopt a wait-and-see approach until the next GDP release. Besides, with retail sales falling into the negative area during the three months to September and manufacturing and services business PMIs retreating below May’s highs, a growth setback is probably already priced in.

Encouragingly, given the significant upside surprise in construction growth stats and the more-or-less anticipated capital expenditures and exports readings for Q3, a sharp miss in GDP figures is currently looking less likely. 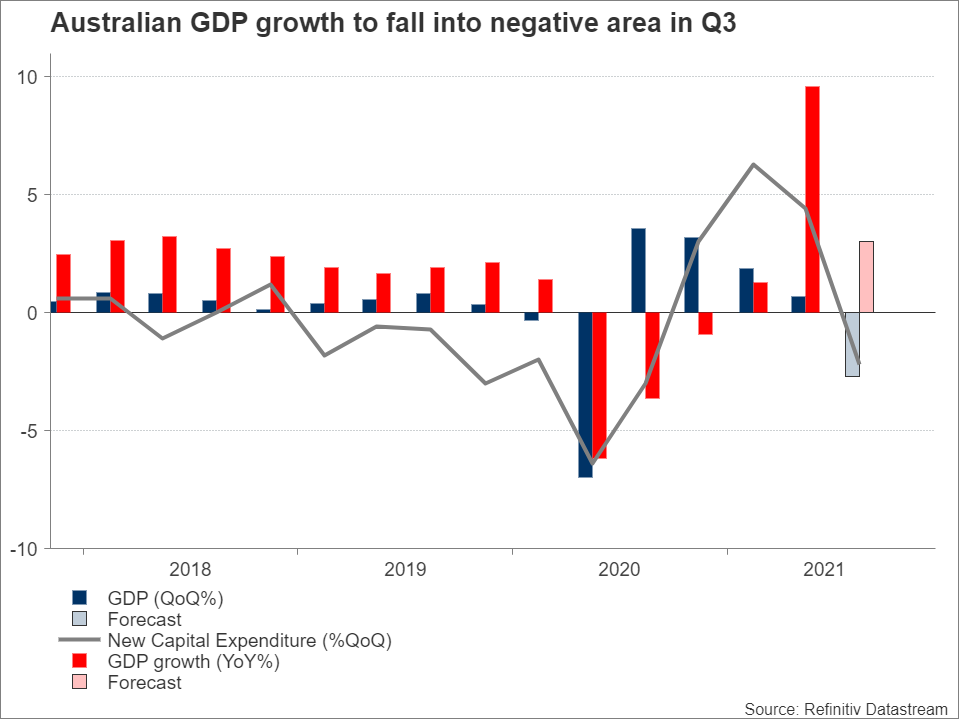 US nonfarm payrolls could be a bigger threat for aussie

Perhaps a stronger-than-expected GDP report could add some support under the aussie, reflecting resilience in the Australian economy despite the latest pandemic restrictions. However, whether any upside correction in aussie/dollar will survive till the end of the week may depend on the US nonfarm payrolls due on Friday.

In particular, the jobs report will probably be a bigger burden for the aussie if a continuous recovery in the US labor market raises the odds for multiple 2022 rate hikes at a time when the Reserve Bank of Australia keeps playing down bets for higher borrowing costs next year.

Inflation in Australia pulled back into the 2-3% range target in Q3, providing little incentive for a tighter monetary policy, and the discovery of the new risky omicron variant will probably be another reason for the central bank to maintain its policy settings accommodative at current levels next week and until February when policymakers are due to review another cut in the A$4bln weekly bond-buying program.

In the event that US nonfarm payrolls arrive softer-than-expected, pressing the greenback lower, the aussie may push above the nearby resistance of 0.7169 with scope to reach the next barricade at 0.7272.