The Bank of England has already discussed the mechanics for switching to monetary tightening and although the plan could only materialize under specific circumstances, the talking itself is a sign that the tightening process is nearing. The main question, however, is when the central bank will make the first move. Certainly, Thursday's policy meeting will not be the right time, but the latest upbeat economic stats may justify some hawkish statements. While this could bode well for the pound, the central bank will need to sound more optimistic than investors anticipate to cheer the bulls, although this could be challenging for the BoE. The announcement is due at 11:00 GMT.Second thoughts on inflation

The BoE chief Andrew Bailey recently confirmed that the board was evenly split between those who believed that there was clear evidence the economy is making progress in eliminating spare capacity and achieving 2.0% inflation sustainably, and those who felt that more needs to be done.

Michael Saunders, one of the MPC members who belongs to the hawkish camp, lately reiterated his view for an early termination to the BoE’s asset purchase program, which is scheduled to end in December at 895 billion pounds with the potential of an extension if economic conditions deteriorate. But more policymakers will probably join him this week after the surprising spike in the August CPI inflation index and the significant growth in employment. Particularly, consumer prices continued to accelerate above the central bank’s price target of 2.0%, jumping by 3.2% y/y, up from the 2.9% expected, while growth in payroll employment clocked in at 183k in July, almost doubling the 93k forecasted by analysts.

It is not certain whether the end of the furlough program this month, which subsidies a portion of wage costs, will force some businesses to limit their workforce, though the above stats are currently a bright sign that the pandemic effects have become less detrimental. 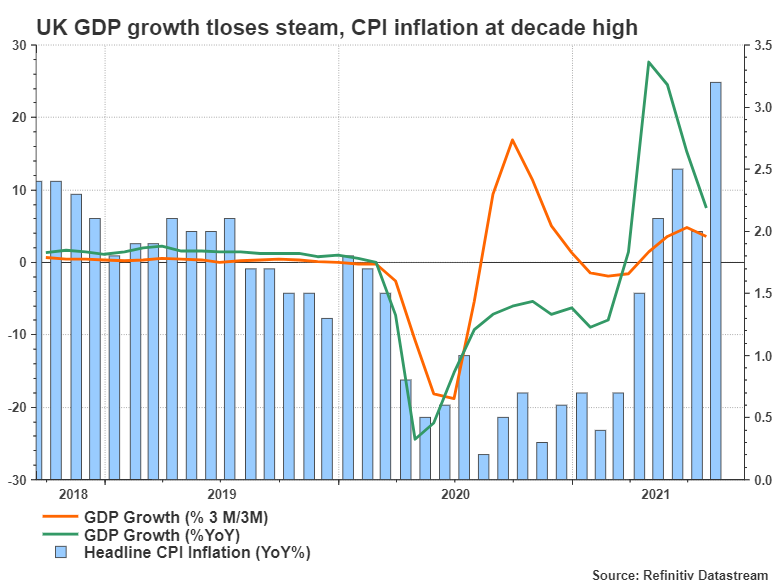 To tighten, or not to tighten

For the BoE, however, the decision of setting an official date for stimulus withdrawal could be more complex, especially when it comes to interest rates, which are expected to increase by 0.15 basis points to 0.25% at some point in the second half of 2022 and then move up to 0.50% by the end of the same year.

On the one hand, the transitory inflation could become stickier in the coming months as supply chain disruptions and a shortage of raw materials may keep boosting energy prices, as it is already happening with gas prices.

Theoretically, more persistent rises in prices translate to a tighter monetary policy, but if the central bank tightens too early, it may discourage consumption at a time when a 12bln pound tax-raising plan is already on the map in the first half of 2022, threatening to ease the pace of recovery. The story could take a different turn if wage growth picks up steam, but so far there is little backing for wage increases in the short term despite the shortage of qualified workers. Still, note that households' saving ratio as a share of GDP has been on the rise since the drop in the third quarter of 2020. 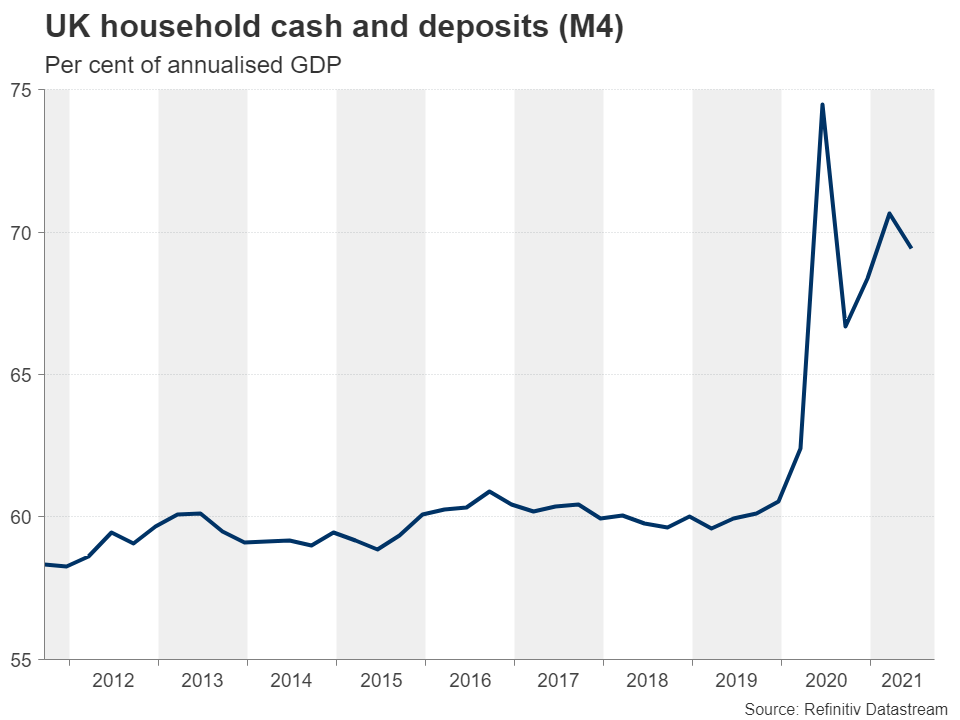 On the other hand, if the BoE does nothing, letting inflation get out of control, it will need to raise interest rates more aggressively in the future at a time when high prices would have already eaten into consumers’ pockets.

The good news for those who expect a hawkish BoE meeting is that the new BoE chief economist, Huw Pill, who will be participating in the voting process for the first time since his nomination, is considered a hawk on policy. Therefore, his contribution could add pressure for the latest round of asset purchases to end this week or stop at the expiration date in December. If that is the case, pound/dollar could advance towards the key 1.3840 resistance area, where the 200-day simple moving average blocks the way higher.

Alternatively, if the BoE lets its asset purchase program expire as scheduled, but keeps the door open to a resumption if economic circumstances deteriorate, also postponing any rate hike commitments to November, pound/dollar could break the lower boundary of its three-month-old range area at 1.3600 and head for the 1.3500 – 1.3450 region.

The decline could start earlier if the flash Markit/CIPS PMI figures for September miss forecasts at 08:30 GMT. Expectations are for the composite index to pull back to 54.5 from 54.8 previously, though unless the services sector, which leads growth in the UK, tumbles, the data may not squeeze the pound.