The Reserve Bank of Australia (RBA) will meet on Tuesday in what could turn into an intense debate for policymakers as the new covid omicron variant has emerged to add to the unknowns of the pandemic just a month after Australian zero-covid measures were called off. Expectations are for the central bank to stand pat on policy, keeping its bond tapering guidance steady, but aussie bulls will still be on guard for any surprising hawkish twists. The policy announcement is due at 03:30 GMT.Australian inflation still within limits

Major central banks have been defending their transitory inflation narrative for months, stubbornly reiterating that high price pressures will prove to be a one-off factor soon or later. But the Fed chief, Jerome Powell, dropped a bombshell last Tuesday, admitting that inflation has been more persistent than initially anticipated and the word “transitory” should be retired. Perhaps, the Fed chairman attempted to explain that the word “transitory” refers to whether inflation could leave permanent scars and does not imply a “short-lived phenomenon”. In any case, the Fed will probably come with a different definition this month for inflation, which will probably recognize the risky upside inflation pressures and set a more hawkish tone to its guidance.

The question that arises at this point is whether other central banks will follow suit. The RBA is first in the queue to announce its policy decision this month but unlike its New Zealand counterpart, who has already hiked its interest rates twice, it is not facing significant deviations from its inflation mandate. The headline CPI fell back to 3.0% y/y in Q3, remaining above the 2.5% midpoint but within the RBA’s 2-3% range target. The core measures, which exclude volatile energy and food prices, came even lower at around 2.1%, providing little incentive for higher borrowing costs. 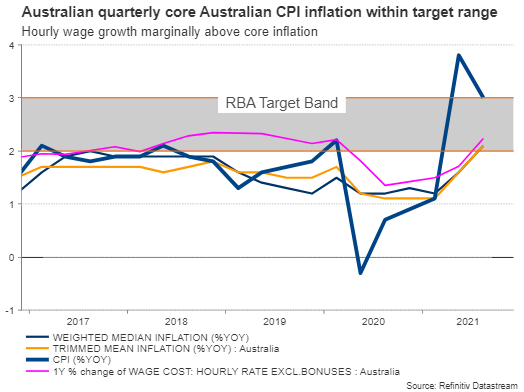 RBA to stand pat on policy; hawkish twists in focus

Of course, house prices have been booming, but the RBA is still exclusively focused on how the pace of wage growth is developing. Particularly, the central bank has clearly telegraphed that interest rates will not rise until the unemployment rate drops to 4.0% and wage growth accelerates above 3.0% which is not expected to happen in the next two years according to its latest projections.

The emergence of the new covid omicron variant, whose effects are still unknown, could be used as an excuse to keep the above rate guidance steady this week. As initially planned, additional bond tapering actions will also be examined during February’s gathering following the termination of the yield curve control program. However, with the lasting pandemic risks threatening to further intensify supply jitters, which could consequently fuel more inflation in the coming months, and the economy facing a softer-than-expected damage from the summer lockdown, policymakers may find it challenging to not sound more hawkish.

It is uncertain how severe the omicron variant will be and whether it will bypass vaccines, but currently the broad view is that demand and supply imbalances will keep feeding inflation and that may add more pressure to the RBA to shift to the hawkish side, especially if the Fed finally sets a roadmap to higher interest rates, increasing the spread between Australian and US bond yields.

Investors are well ahead of the central bank at the moment, pricing three rate hikes and even a fourth one for next year, around the same period the Fed rate hike expectations are also placed. If the RBA surprises markets by slashing its bond purchases before February or even setting an end date to its bond buying program next year, the aussie could change course to the upside in speculation that Australian interest rates may pivot sooner than expected and could even compete with the US ones. In this case, aussie/dollar could drift higher to test the former support of 0.7100, while not far above, the 0.7169 barrier may also come on the radar if buying forces intensify.

Well, the RBA tends to occasionally deliver surprising policy announcements, therefore, the above scenario or at least some hawkish twists cannot be ruled out on Tuesday.

Otherwise, if the RBA plays it safe, citing the growing uncertainty around the pandemic and relying on upcoming data releases to examine any policy adjustments, aussie/dollar could breach the 0.6990 floor from November 2020 and slide towards the 0.6900 psychological level.