Following last week’s blistering jobs report out of the United States, investors will be turning their attention to Wednesday’s July inflation figures as bets of a 75-basis-point rate hike in September are back on. However, this time round, the CPI data, due at 12:30 GMT, might break with recent tradition and point to some cooling of price pressures. But what would a soft inflation report mean for the Federal Reserve? The US dollar’s post-NFP bounce back could be undone if the numbers show that inflation has likely peaked.Is the US in recession or not?

A technical recession is defined as two consecutive quarters of contraction in economic output. So if the GDP data is to be believed, the American economy is already in recession. However, other indicators such as for consumption and employment suggest that the economy is still growing. Even forward-looking data like the PMI surveys point only to a slowdown and not a full-blown recession and the Fed seems to agree. 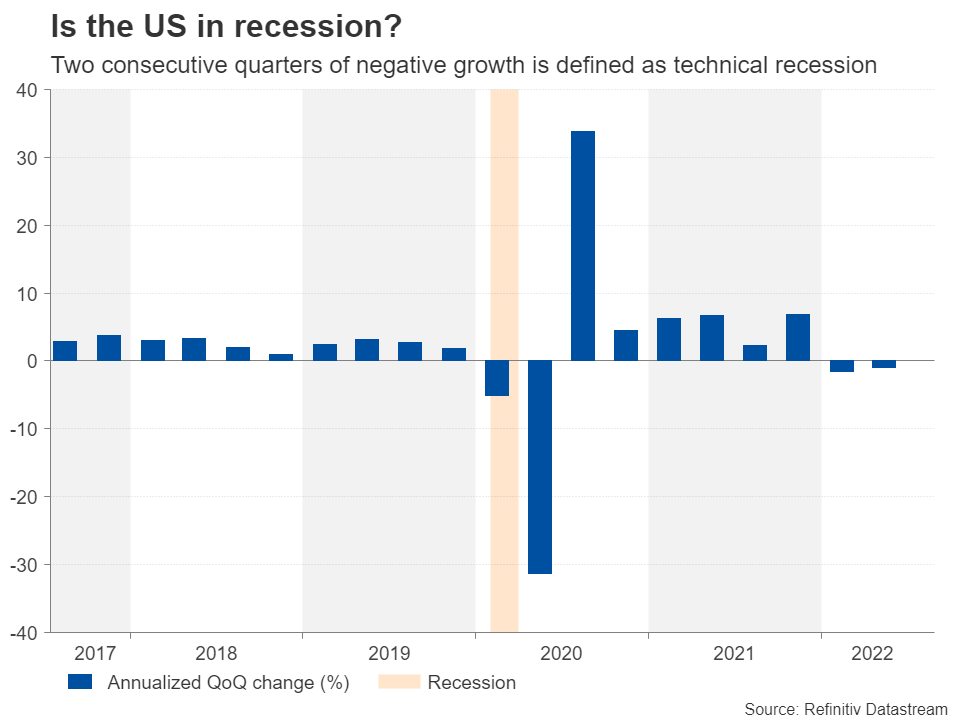 Fed policymakers have been downplaying the GDP estimates, highlighting the strong jobs growth and signalling the markets that there’s still a lot of work to be done to bring inflation under control. The latest nonfarm payrolls figures seem to back the Fed’s argument as the labour market added an astonishing 528k jobs in July, pushing the unemployment rate down to a new post-pandemic low of 3.5%. Perhaps, slightly more unnerving is the fact that wage growth also appears to be heating up again, having moderated somewhat after March.

Unsurprisingly, market expectations for a more aggressive Fed were bolstered after the jobs data, with investors lifting the odds for a 75-bps rate increase in September to 65% from around 40% before. However, there’s a risk those expectations will be pared back again if the CPI numbers confirm the prediction that inflation has likely topped out.

Amidst all the talk of recession and investors’ fear of overtightening by central banks, there’s been some glimmer of hope on the inflation front. The price components of the PMIs have come down substantially from their peaks, driven not only by the recent pullback in the major commodity prices, but also by the easing of supply constraints.

It will probably take some time for the ebb in inflationary pressures to fully filter through the economy but where there is less of a lag is gasoline prices. Oil’s steady decline since the middle of June is now starting to make its way through at the pump across America. Apart from fuel, the other big generators of inflation in post-pandemic America have been rents and used car prices. There is increasing evidence that the former is on the way down and there are some signs that the used-vehicle market is normalizing too. Hence, the risk to the CPI readings seems tilted to the downside.

The consumer price index is forecast to have risen by 0.2% month-on-month in July – the slowest pace in almost a year, which would translate to a drop in the annual rate from 9.1% to 8.7%. However, there may be some bad news when it comes to underlying inflation. The core measure of CPI is expected at 6.1% y/y, which would mark a slight acceleration from the prior month’s rate of 5.9%, though the month-on-month rate is seen moderating from 0.7% to 0.5%. 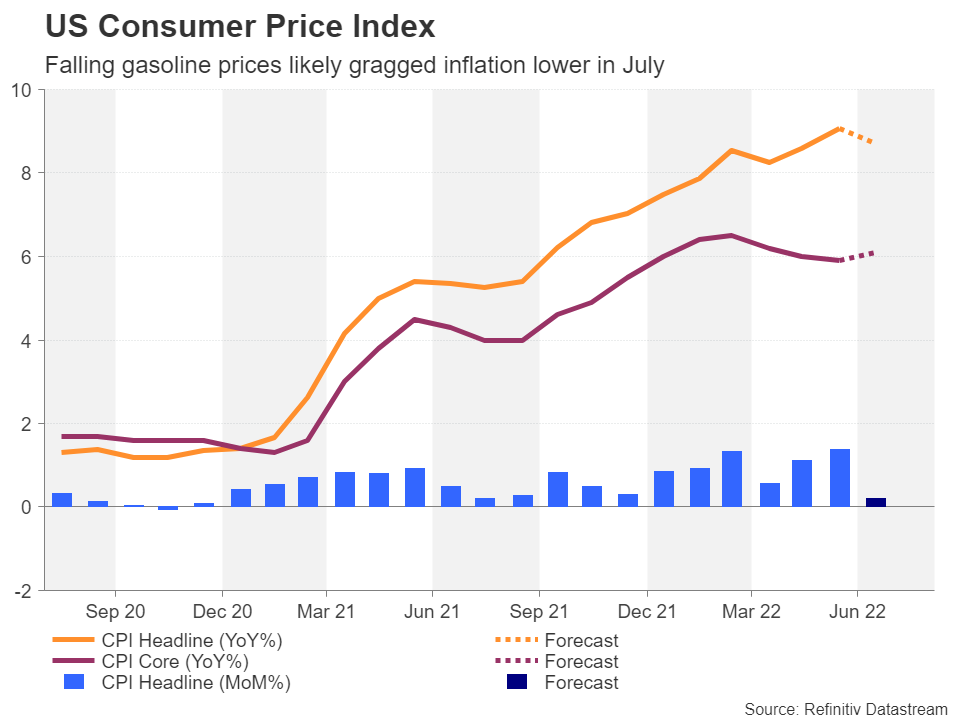 Producer prices are also showing signs of having peaked. PPI for final demand due Thursday is expected to fall from 11.3% to 10.4% y/y, while PPI excluding food and energy is forecast to have declined from 8.2% to 7.6% y/y.

Dollar’s bounce has hit a wall

If there is a surprise miss in the headline CPI print, the dollar’s latest rebound against the Japanese yen would be at risk of faltering. The pair is already struggling after being capped by the 50-day moving average (MA) in the 135-yen region. Renewed selling pressure could push the dollar back down to the August trough of 130.39 yen.

However, a stronger-than-expected set of inflation data that comes hot on the heels of the stellar jobs report could help the pair break above the 50-day MA and have another attempt at hitting the 140 level, which it failed to do in July when the rally stopped at 139.39.

Inflation expectations matter tooIf the CPI and PPI numbers fail to provide much clarity on where Fed policy is headed, investors will get another chance to gauge price pressures on Friday from the University of Michigan’s consumer sentiment survey. Last month, consumers’ one- and five-year inflation expectations measured by the survey eased slightly, adding to the growing momentum behind the view that the US is past peak inflation. A lot is riding on the August readings to confirm the downward trend in inflation expectations.