Inflation data will grab the headlines for another week as more countries publish CPI numbers. But concerns about global growth will also preoccupy investors’ minds as China reports its GDP estimate for the third quarter and flash PMI figures for October are released. With the major central banks preparing to pull back their pandemic-era stimulus just as supply constraints are adding to businesses’ pain, there is heightened sensitivity in the markets about the growing threat of persistently high inflation. Will China’s slowdown jolt markets?

There is little doubt that China’s economy is sailing through a storm right now as policymakers juggle to contain multiple crises erupting at the same time. The country’s property sector is facing a growing number of defaults, triggered by the Evergrande debt fallout. Manufacturers are having to deal with power outages amid a worsening energy crunch, and consumption is being dampened by lockdowns in several regions that have seen fresh outbreaks of the Delta variant.

All this comes on top of broader supply disruptions that have been building up for some time as well as the government’s tightening regulatory grip on tech firms, which likely took their toll on the economy in the third quarter. Some economists are predicting the economy didn’t grow at all between the second and third quarters. But the consensus forecast is for GDP to have expanded by 0.5% on a quarterly basis and by 5.2% year-on-year. This would make it the slowest growth since Q3 2020 when the economy was still recovering from the first Covid shutdown. 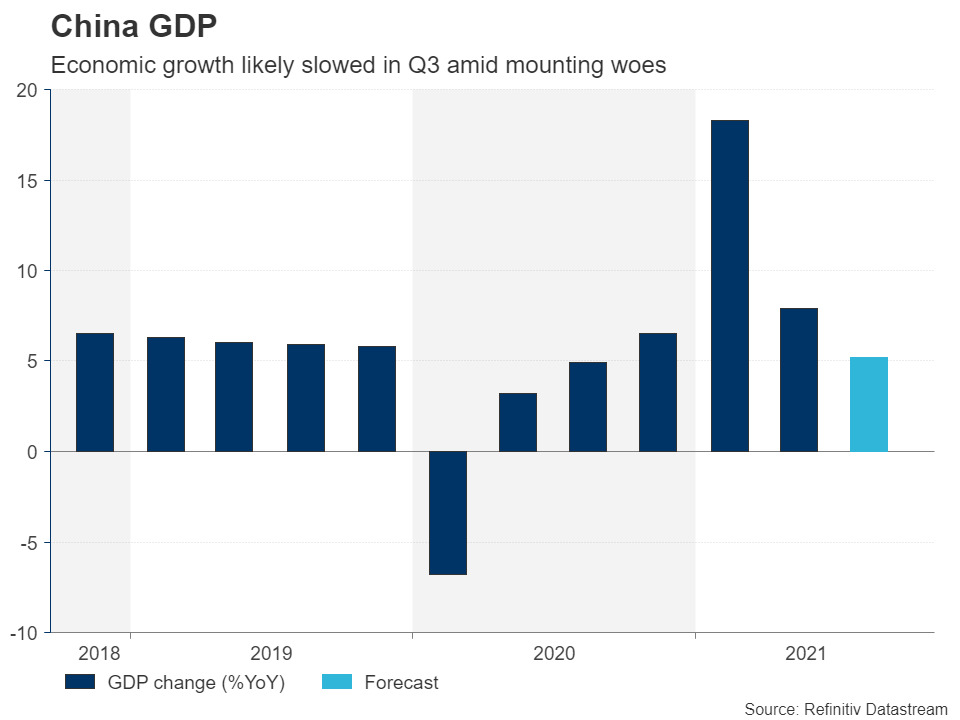 Other data due out of China on Monday are not anticipated to soothe market nerves about a slowdown either. Industrial production is expected to have picked up only marginally to 4.5% y/y in September and growth in retail sales to have quickened slightly to 3.3%.

Disappointing numbers could dent risk appetite, weighing particularly on equities globally and the Australian dollar, which is seen as a liquid proxy for China plays. The aussie has been boosted lately from the surge in commodity prices and strong demand for Australia’s resources exports. But if investors were to get spooked about the outlook for China, the currency could come under selling pressure. Also relevant for aussie traders next week are the minutes of the RBA’s last policy meeting on Tuesday and Australian flash PMIs on Friday.

Inflation in focus in Japan and New Zealand

Like its aussie counterpart, the New Zealand dollar is in the process of rebounding from the late September lows against the US dollar and quarterly inflation stats on Monday could add more fuel to the rally. New Zealand’s consumer price index is expected to have accelerated to 4.1% y/y in the three months to September, likely reinforcing bets that the RBNZ will raise rates again in November. However, a stronger-than-forecast CPI print could lead investors to price in a more aggressive rate hike path after expectations were somewhat pared back recently.

Inflation data will be doing the rounds in Japan too. The core CPI rate is projected to have edged up slightly in September. However, Japan has been battling deflation for so long that any price rises would be welcome by policymakers. Even if higher inflation were to start worrying the Bank of Japan, the economy is still reeling from the recent states of emergency that were imposed to contain the Delta variant so there is no immediate prospect of stimulus being scaled back.

The CPI figures are out on Friday alongside the flash manufacturing PMI. Earlier in the week, September trade data will be watched on Wednesday. The yen might find support from any positive surprises in the inflation numbers. However, with Japanese government bond yields unable to join the global rally due to the BoJ’s yield curve control policy, the yen will likely remain on the backfoot against its peers, and even more so against the US dollar. 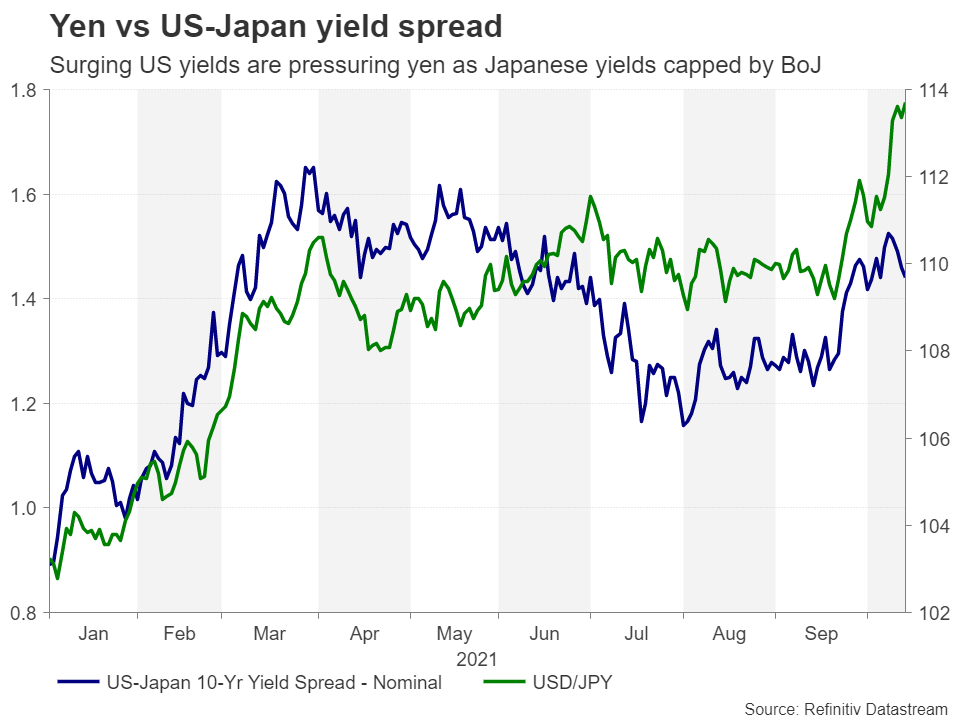 Energy shortages in Europe appear to have hit the UK the hardest but euro area economies are increasingly feeling the impact of soaring oil and natural gas prices too. However, higher electricity prices are not the region’s only headache. Shortages of key components such as microchips are holding back German automakers and the wider the supply constraints become, the more Europe’s manufacturers will suffer.

IHS Markit’s PMI surveys have already started to show some impact from the supply issues on the manufacturing sector in September and the problems probably got worse in October. 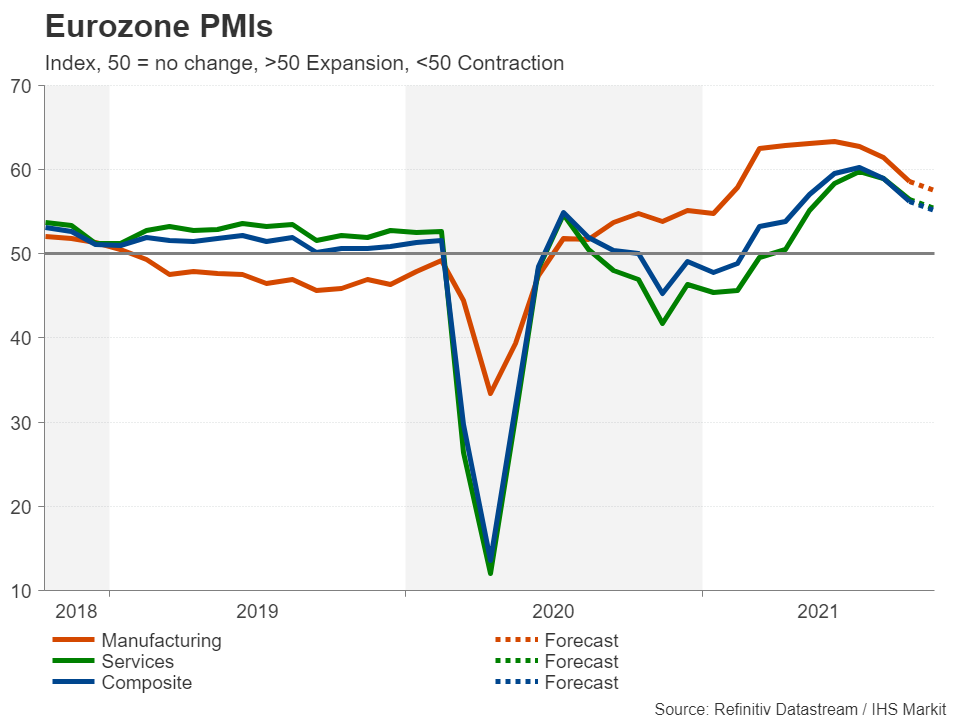 The euro, which is easing from a 15-month trough versus the dollar, could plumb fresh lows if Friday’s flash PMI releases point to a further loss in the Eurozone’s growth momentum in October.

Having trended downwards since the beginning of summer, the pound is now attempting a breakout from this negative slope. The latest economic pointers out of the UK next week may help it do that as inflation numbers are due on Wednesday, followed by retail sales and flash PMIs on Friday.

Headline inflation jumped to 3.2% y/y in August, prompting a hawkish shift at the Bank of England and bringing forward rate hike expectations. If CPI moves further north of the BoE’s 2% target in September, a rate increase in November would become more probable. And although there is a risk that retail sales and the flash October PMIs might underwhelm, unless they are shockingly bad, policymakers are likely to put more weight on the potentially hotter inflation readings. 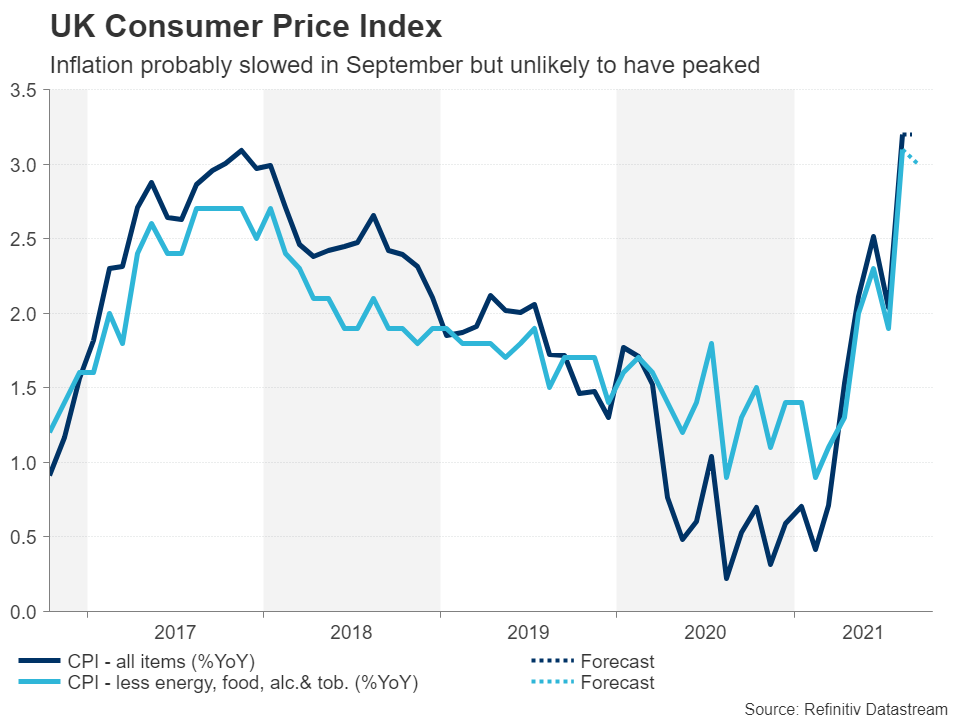 Nonetheless, even if predictions for an early rate hike were to intensify, the pound’s gains could be limited if investors become less optimistic about the UK economy, either from the data or from troubling headlines about deepening supply shortages across Britain.

Quieter week for USD; Canadian CPI could buoy the loonie

The greenback’s latest advance has paused after long-dated Treasury yields stepped back from their recent highs as markets began to price an earlier rate hike but a shallower tightening path by the Fed. With not a lot on the US agenda in the coming days, the dollar might continue to consolidate.

Starting the week on Monday are industrial production figures for September, followed by building permits and housing starts on Tuesday. On Thursday, existing home sales and the Philly Fed manufacturing index will attract some attention. The flash PMI readings will wrap up the week on Friday.

The Canadian dollar has been capitalizing on the greenback’s softness, while higher oil prices have also been lifting the commodity-linked currency. On Wednesday, Canadian CPI data could additionally aid the loonie’s ascent if it shows inflation rising further above 4% in September, which would likely put the Bank of Canada on track to taper again at the next meeting at the end of the month. More Canadian indicators will follow on Friday with retail sales figures for August.