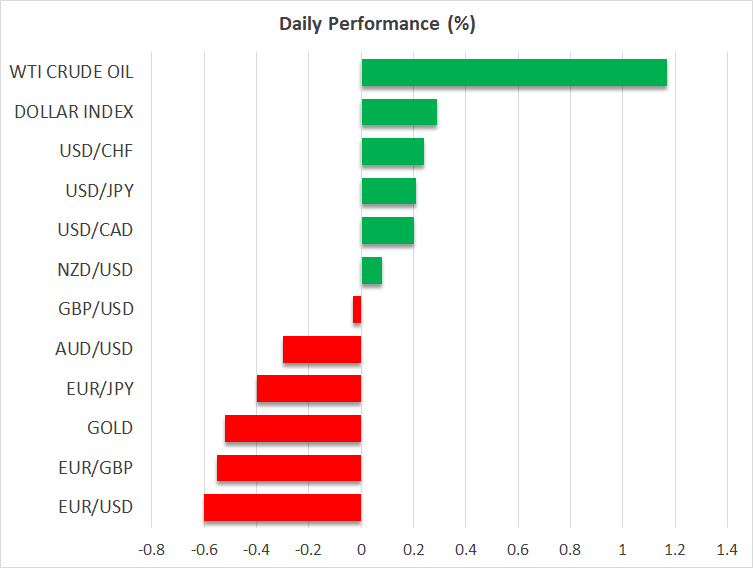 Fed rate hike path trimmed back after weak US data

Signs that consumer demand in the United States is being pressured from the increase in the cost of living and that supply shortages are getting worse were laid bare in the latest PMI report on Tuesday. The S&P Global’s flash services PMI fell more than expected in May, raising fresh concerns about the US economy, and although the manufacturing PMI met expectations, it was also down sizeably from the prior month.

But the worrying data didn’t end there as new home sales plunged by 16.6% in April, as higher mortgage rates and record prices put off buyers.

The less-than-robust figures raised speculation that the Federal Reserve may not have to hike rates as aggressively as previously thought. Atlanta Fed President Raphael Bosic further stoked such expectations, having suggested a day earlier that the Fed should take a pause in September to allow policymakers to assess the impact of the previous rate hikes.

The minutes of the Fed’s May policy meeting due later today will likely reinforce the view that additional 50 basis point rate hikes will be needed in the next two meetings, although the rate path after that becomes a lot foggier. FOMC members’ views on how quickly they anticipate inflation to come down as well as any potential revelations on the balance sheet reduction, such as the possibility of the outright sale of assets, particularly of mortgage backed securities, will be scrutinized by investors.

In the meantime, however, the growing doubts about the strength of the US economy have dented expectations about year-end rate hikes, which have fallen by about 16 bps. Treasury yields have also been subsequently declining, with the 10-year yield dropping to a one-month low of 2.718% yesterday. The US dollar brushed a similar low against a basket of currencies but has bounced back on Wednesday, climbing back above the 102 level.

A tepid recovery for stocks

In equity markets, stocks were mixed in Asia but European shares and Wall Street futures were mostly higher. The recent consolidation in sovereign bond yields, especially in US Treasuries, might be supporting the slight risk-on tone today. Overall, however, the mood remains fragile amid the growth scares in all the major economies.

China is still a big question mark as authorities seem to be taking only incremental steps to boost the economy even as many regions are under tough lockdown orders. The virus picture might be improving in Shanghai but the port city of Tianjin has just been locked down.

The weakening outlook has already prompted one Wall Street firm to issue a profit warning and there could soon be a flurry of them. The Nasdaq Composite plunged by 2.4% on Tuesday as tech firms that rely on digital advertising for their main revenue source came under pressure after Snapchat’s owner said it won’t be able to meet its own profit targets for the current quarter.

Nasdaq futures were marginally higher at the start of European trading, though S&P futures were losing ground.

It was a similarly mixed picture in the currency markets as the dollar’s revival pared earlier gains for the pound and kiwi.

The New Zealand dollar surged after the RBNZ went ahead with the expected 50 bps rate hike but indicated that it may have to get even more aggressive in its fight against inflation. The hawkish tilt took some investors by surprise as the RBNZ had an early lead on rate increases and is now signalling that the cash rate may have to double to 4.0%.

The kiwi spiked above $0.65 immediately after the announcement but is now trading flat around $0.6465.

The pound skidded yesterday after a big drop in the UK’s services PMI, which raised alarm bells about a recession, but seems to have perked up on Wednesday and is holding steady around $1.2530.

The Australian dollar is under pressure today following a surprise drop in construction output in Australia in the first quarter.

But the worst performing currency is the euro, which has slipped back below the $1.07 level. As the ECB’s public debate on policy normalization rumbles on, the hawks have been active lately, trying to build momentum for a 50-bps rate hike in July. However, there seems to be some pushback. President Lagarde has hinted that she sees rates slightly above zero by September, in a sign of compromise. But Governing Council member Fabio Panetta today warned against “normalisation tantrum”, suggesting that normalization does not necessarily mean getting rates back to ‘neutral’ level.