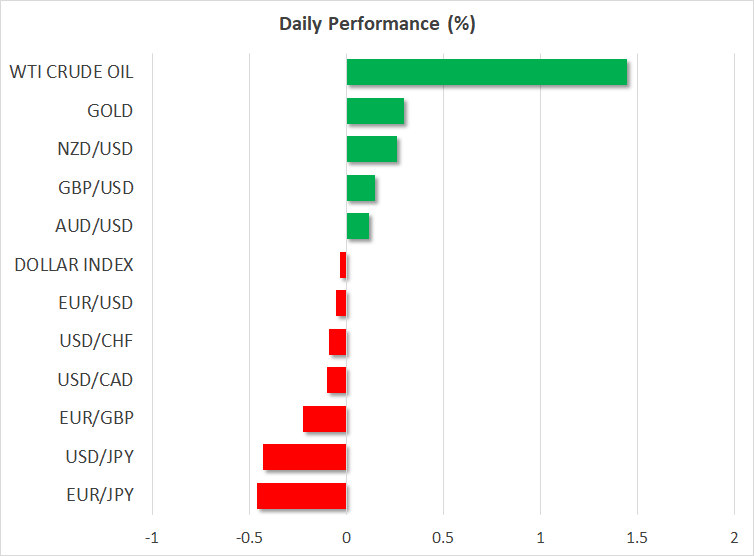 Market sentiment remained mired in recession anxiety as the latest spike in natural gas prices fuelled concerns that the energy crisis will drag Europe into a major economic slump. Dutch TTF gas futures surged to their highest since March yesterday as supply came under renewed pressure. Russian gas flows to Europe have been steadily falling in recent weeks amid a dispute over the payment in roubles. But worries about a worsening supply crunch were exacerbated after Norwegian oil and gas workers went on strike on Tuesday.

The Norwegian government has since stepped in to end the strikes and UK and European gas futures are declining today, but the euro continues to face steep selling pressure. Investors not only think there’s a greater chance of the euro area economy tipping into a recession this year, but also foresee a longer lasting impact on businesses as they switch away from Russian energy imports.

The single currency plummeted to a 20-year trough of $1.0233 on Tuesday and was trading just a touch higher today around $1.0255. The turmoil in energy markets and the hanging threat that Russia could cut off supplies to Germany and other European buyers at any moment has led to a sharp repricing of tightening expectations for the European Central Bank. Investors have priced out about 100-basis-point rate hikes over the next year, just a couple of weeks before the ECB is expected to begin raising rates for the first time in more than a decade.

The US dollar was the biggest winner from the latest market panic about a looming recession, sweeping up gains across the entire FX board, even against its safe-haven peers of the yen and Swiss franc. The dollar’s gauge against a basket of currencies soared by 1.3%, breaking above the 106 level for the first time since December 2002.

A further retreat in Treasury yields did little to dent its appeal. Bond yields have been pulling back from the peaks scaled in mid-June and there has been no significant change in spreads. But the greenback has kept climbing, in a testament to its dominant position as the world’s reserve currency, with the traditional safe-haven gold paying a hefty price from the rush to buy dollars.

But what has caught investors’ attention over the last day is the inversion of the two-year and 10-year yield curve, in what is widely perceived as a precursor to a recession.

Copper struggles but oil and stocks bounce back

This is likely keeping recession fears elevated and weighing on growth-sensitive commodities such as copper, even as the mood has improved slightly since yesterday. Copper futures slid to a 19-month low on Wednesday, hitting $3.37 a pound on the back of the deteriorating growth outlook.

However, oil prices are rebounding today, along with stocks. WTI and Brent crude futures plunged by about 10% yesterday, with the former briefly dipping below $100 a barrel. Today’s move higher could be as much technical driven as it is about the slight easing in risk aversion.

But for equities, it is the drop in yields that is shoring up support. The S&P 500 managed to erase losses of more than 2% yesterday to post modest gains of 0.2%. US futures are slightly negative today but European markets have opened strongly in positive territory.

Johnson’s premiership is increasingly hanging by a thread, but the pound has recouped earlier losses to stand flat around $1.1960. Doubts about the UK’s economic prospects are the number one concern for sterling right now, with the Bank of England warning that the growth outlook has “deteriorated materially”, and a new prime minister may not necessarily be able to do much to change that in the short term.

Recession risks will remain at the forefront of investor’s minds as the ISM non-manufacturing PMI due later today will provide fresh clues as to the health of the US economy, while the minutes of the Fed’s June policy meeting might revive fears of overtightening.

Daily Market Comment – Dollar steadies ahead of US inflation shockwave