Shares on Wall Street staged a dramatic rebound on Monday, recovering from heavy losses that briefly took the S&P 500 into correction territory. The benchmark index was down by about 4% at one point before a last-minute rally pulled stocks out of the sinkhole. The S&P 500 ended the session 0.3% higher. The Dow Jones closed up a similar amount, while the Nasdaq Composite, which had slumped almost 5%, posted a 0.6% gain. However, the tech-heavy Nasdaq remains in correction territory and futures are down again, suggesting the bounce back was merely a buy-the-dip opportunity rather than a meaningful rebound.

Still, with technical indicators signalling that the near two-week selloff was overdone, a comeback is possible, especially if the upcoming earnings releases and Fed meeting go the markets’ way. In the meantime, there are jitters all around.

Stocks in Asia plummeted today, with China’s CSI 300 index closing at a six-month low and the Nikkei 225 at a 5-month low. It’s a slightly more positive picture in Europe where shares are recouping some of yesterday’s huge losses.

Even if the mood continues to improve somewhat over the course of the day, sentiment remains fragile as investors have quite a lot to grapple with.

The US Federal Reserve starts its two-day monetary policy meeting today and although no change is expected at tomorrow’s announcement, speculation is running high that Fed chief Powell will flag a sharp removal of accommodation at the next meetings. Markets are now in no doubt that policymakers need to act quickly to get a grip on inflation. But there are worries that the Fed has fallen so behind the curve, it won’t be possible to bring inflation back under control without choking off growth.

Yesterday’s flash PMIs out of the US have already raised question marks about the strength of the economy as they pointed to stagnating growth in January.

The fears about the growth outlook might be one reason why Treasury yields have taken a backseat lately, though they are edging slightly up today.

The US dollar on the other hand has been taking cue from the broader market anxiety, not just about the Fed but also from geopolitical factors, as well as the elevated volatility in stock markets.

The dollar index is currently trading near two-week highs, as it continues to erase its early January slide. The safe-haven Japanese yen has been another major beneficiary of the recent market panic, appreciating significantly against the riskier currencies such as the pound, aussie and kiwi.

Gold hasn’t fared too badly either from the latest market upheaval, though the strong bids for the dollar in the last couple of sessions have taken some of the shine off bullion. The precious metal was last quoted 0.3% lower at $1,837/oz.

Whether gold can make more substantive gains in the next few days probably depends on whether the standoff between the West and Russia over Ukraine escalates further. With Russian troops massing on Ukraine’s border, the situation could deteriorate at any moment.

The prospect of a war on Europe’s doorstep is taking a toll on the euro, which has slid back below $1.13. The never-ending partygate saga in the UK seems to be only marginally weighing on sterling.

The New Zealand dollar, meanwhile, is unable to catch a break, skidding to more than 14-month lows versus the greenback. The loonie was off yesterday’s lows as investors eyed a possible rate hike tomorrow by the Bank of Canada. But the Australian dollar got a boost from stronger-than-expected CPI data out of Australia earlier today, bolstering expectations of a hawkish shift by the RBA next week.

Coming up later today, the US consumer confidence index for January could help shape the market tone ahead of the earnings reports by General Electric and Verizon before the market open, and by Microsoft after Wall Street’s closing bell. 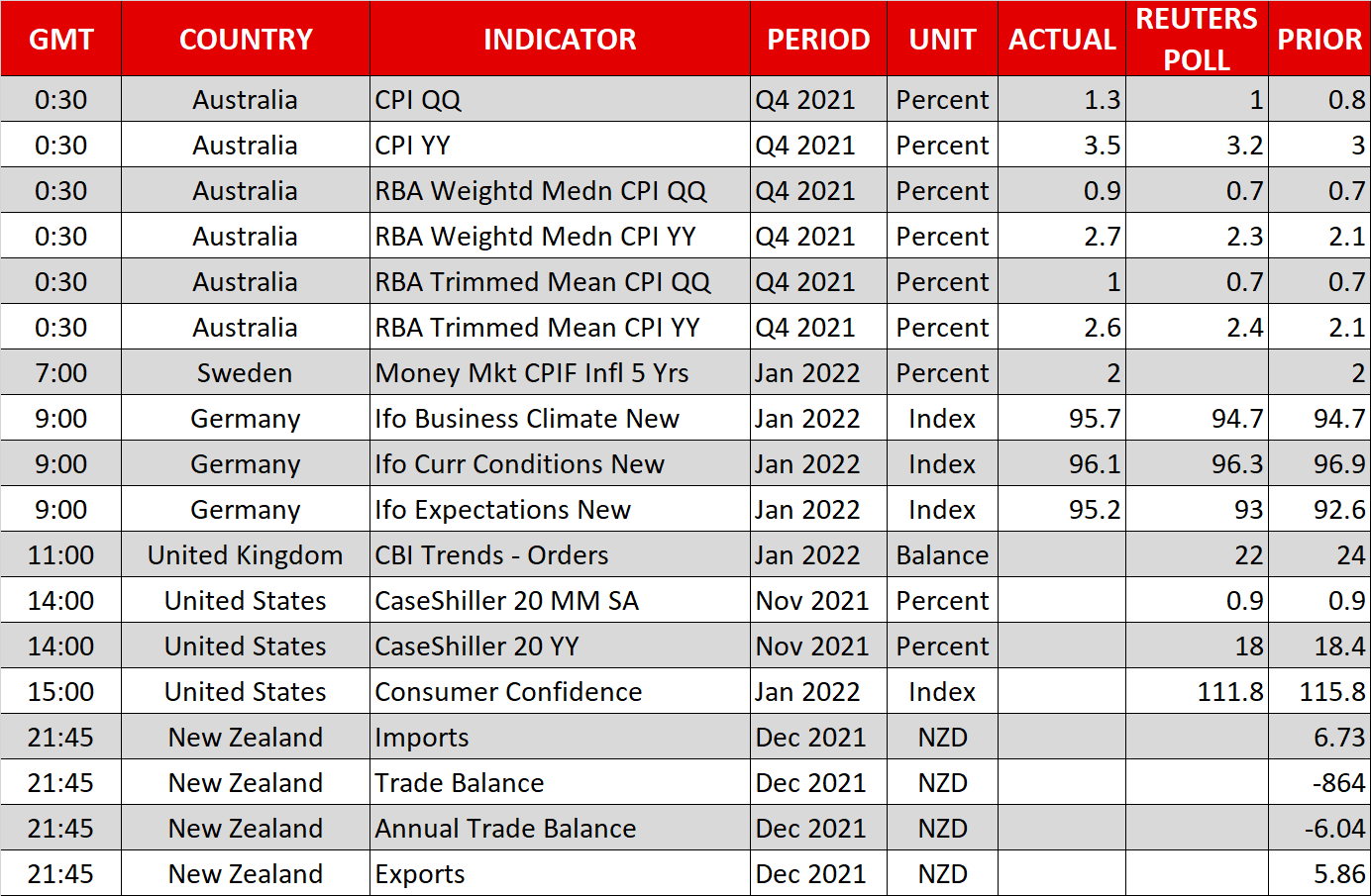