US aluminium giant, Alcoa Corp, will unveil its earnings results for the third quarter on Thursday after the market close. The Company has beaten its earnings in each of the preceding six quarters and with the price of aluminium soaring lately, another strong set of results could be on the cards. Alcoa stock has been outperforming the S&P 500 Metals & Mining Industry index this year, as well as the broader S&P 500 index. Can the Q3 earnings keep the bulls in control? 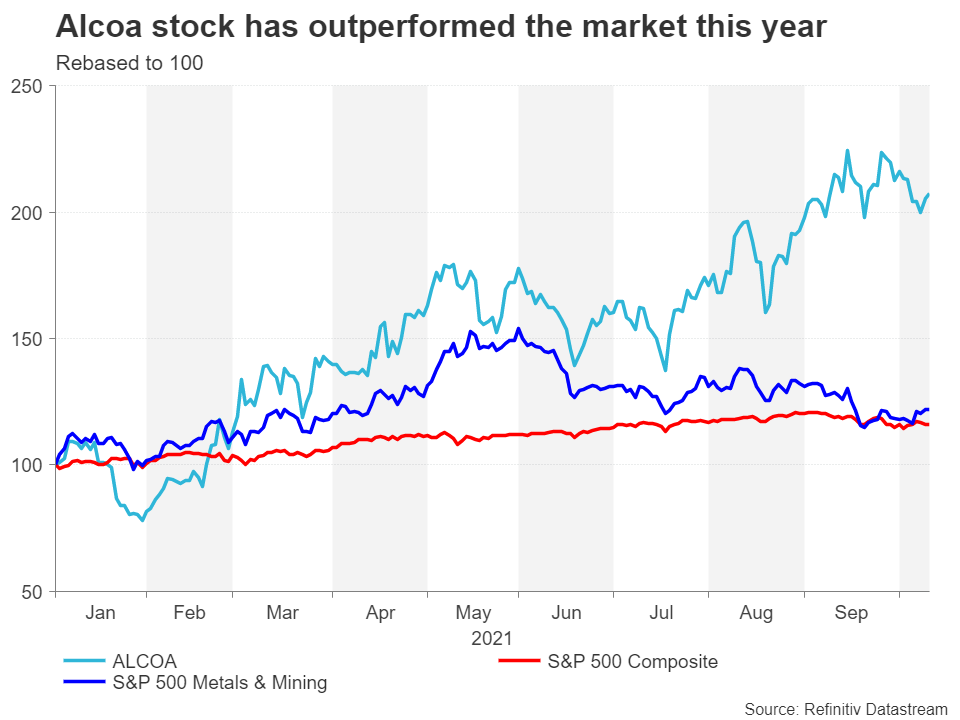 Metal prices are through the roof

Metal and other commodity prices have been rallying since late spring of 2020 when economies around the world started to emerge from the first Covid lockdown. Aside from the reopening effect, the global shift towards green energy has also been boosting demand for many metals such as aluminium, which are used extensively in many components, including batteries.

But strong demand is not the only thing that’s driving the price of aluminium and other metals sharply higher as the sector has not been immune to the global supply crunch. Power outages in China have forced many smelters in the country to ration electricity, leading them to cut production. Even in Europe, where energy costs are spiraling higher, some producers have had to reduce output due to electricity providers being unable to meet demand. Aluminium prices have surged more than 50% in the year-to-date, jumping by 7% so far in October alone. 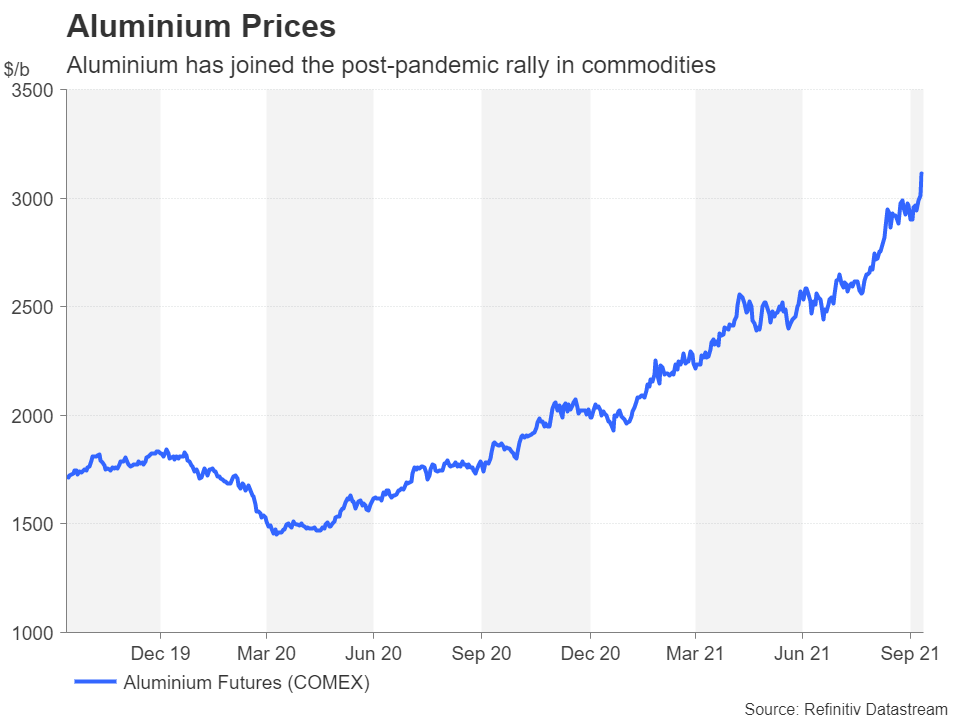 For Alcoa, this can only be a good thing as the United States is unlikely to experience an energy crisis of its own, therefore, it can boost production at its own facilities, not just at home but also in South America as well. Furthermore, Congress is close to finalizing the $1 trillion infrastructure bill, which if passed, will unleash billions of dollars for rebuilding highways, railroads and bridges across the US, benefiting domestic steelmakers.

All this bodes well not just for the last quarter, but also for upcoming quarters. In the three months to September, Alcoa is expected to have earned $2.955 billion in revenue, which would represent an almost 25% increase on the same quarter in 2020, making it the third quarter in a row of double-digit annual growth. Its earnings per share are forecast at $1.89 according to Refinitiv IBES estimates. This would be up 5.2% from a year ago and up 26.8% from the prior quarter. 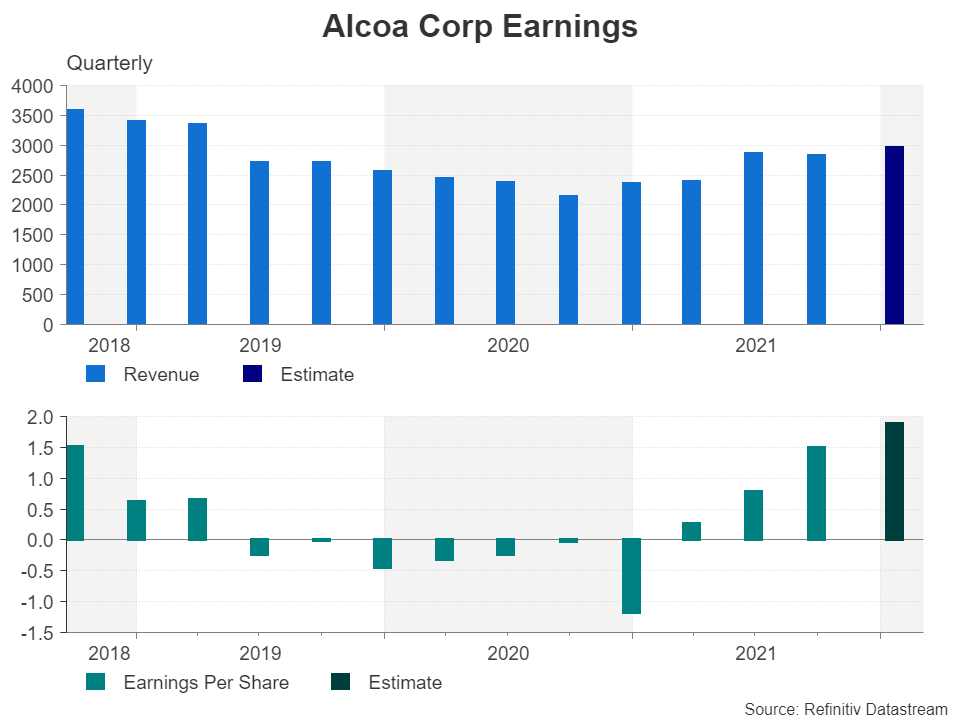 Can the rally be maintained?

Alcoa’s share price has rallied more than 100% in 2021 and further gains could be in store if there are positive surprises in the earnings release. The stock is currently trading around $48.0. Better-than-expected results could push the price up towards the September top of $52.45, which was a three-year high. The 161.8% Fibonacci extension of the May-July downleg at $52.79 is not far above this peak, making the region a strong resistance point. However, if cleared, the 200% Fibonacci of $57.99 would be the next target for the bulls.

To the downside, the 50-day moving average (MA), currently at $45.74, is likely to defend the price in case there is a selloff from worse-than-expected earnings. A drop below the 50-day MA could see the stock initially stalling at the 78.6% Fibonacci of $41.48 before heading towards the August trough of $36.61

Still bullish but some risks to watch

Analysts remain optimistic about the stock, maintaining their ‘Buy’ recommendation and setting a median price target of $56.0. The Company’s price/earnings (PE) ratio, however, is somewhat above the industry average. Alcoa has a forward PE multiple of 7.52 compared to the industry median of 3.36, although these are far from levels that would be considered as overvalued and in fact, the stock is likely undervalued.

Nevertheless, there are some risks for Alcoa from the earnings call on Wednesday. Investors will be looking to see whether the wider supply constraints in the economy are pushing up costs for the Company. Any guidance for the next quarter about revenue or the demand outlook in general will be important too. Specifically, the construction industry in the US is still recovering so although on the one hand there is plenty of room for further growth, labour shortages are significantly curbing activity.

Finally, President Biden’s infrastructure bill has yet to complete its passage through Congress so any surprises on that front could also pose a negative risk for the stock.