Trade and inflation numbers will be watched out of Japan this week ahead of the weekend elections for Japan’s upper chamber. The June trade data is due on Wednesday at 23:50 GMT, while the inflation figures for the same month will be published on Thursday at 23:30 GMT. Both releases are projected to point to a softening in Japan’s economic picture in a potential warning sign for the Bank of Japan. But with Prime Minister Shinzo Abe’s coalition expected to hold onto its two thirds majority in Parliament’s upper house, additional fiscal stimulus could also be an option for policymakers.

Downtrend in exports to continue

Japanese exports have been on the decline since December as the fallout from the US-China trade war starts to disrupt trade and investment flows globally. After some easing in the rate of decline in recent months, exports plunged by an annual rate of 7.8% in May and are forecast to have dived by a further 5.6% in June. Imports have been performing somewhat better, indicating domestic demand hasn’t been too badly affected from the worsening overseas outlook. However, that could be about to change as imports are forecast to have dropped for the second straight month, by 0.4% year-on-year in June. 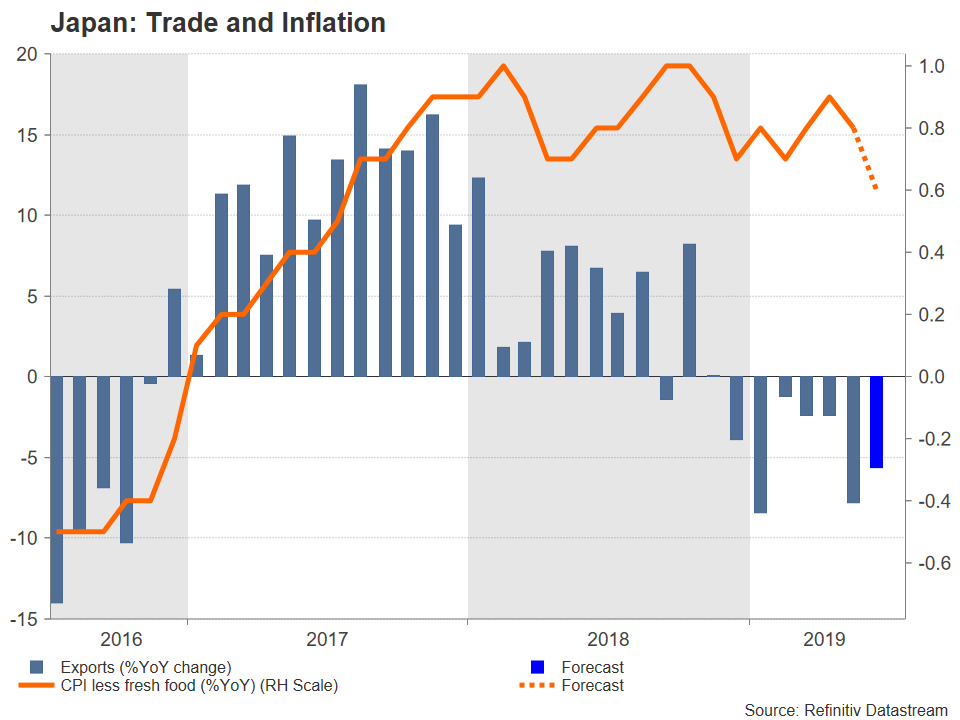 The inflation numbers are not expected to bring too many smiles either as the core rate that’s monitored by the Bank of Japan is anticipated to moderate again. Core CPI, which excludes fresh food prices, is forecast to slip to a near two-year low of 0.6% y/y from 0.8%. While some of the decline is likely to be down to transitory factors, it would nevertheless take the BoJ’s targeted inflation measure uncomfortably far from the 2% target, adding pressure on the Bank to ramp up stimulus soon.

The yen could face some downside pressure if the incoming data begins to firmly point to more monetary easing. Increased expectations of looser policy from this week’s figures could shore up the sliding US dollar against the yen, helping the pair aim for the 50% Fibonacci retracement of the April-June downleg at 109.58. On the other hand, if the data fails to provide clear policy direction, the dollar is likely to remain on the backfoot and could soon re-challenge the recent support at 107.80 yen.

BoJ stimulus may have to wait until Autumn

The Bank of Japan next meets on July 29-30 and although investors see only a very small chance of a change in policy this month, expectations are high for a year-end cut in the main policy rate to -0.20%. The BoJ could also expand the size of its bond holdings as well as possibly diversify the type of assets it purchases. However, policymakers are likely to struggle to reach a decision on the need for further policy easing before the planned sales tax hike comes into force in October.

But even if the BoJ was to decide to pump more stimulus in the coming months, many think it would only be effective if it’s accompanied by fiscal stimulus given that monetary policy is increasingly seen as losing its potency. The government has already indicated it stands ready to prepare a fresh fiscal package to overcome any downturn.

Despite voters’ doubts about the success of Abenomics, the ruling coalition is expected to hold on to its two thirds majority in Parliament’s upper house at this Sunday’s elections. The projected win should give the government the go-ahead to proceed with its long-held desire of changing Japan’s pacifist constitution as well as encourage it to carry out further economic reforms. Any unexpected developments at the polls, however, against Abe’s party could generate some safe-haven flows for the yen.