The Japanese economy contracted in Q3, data released on Tuesday at 2350 GMT are forecast to show, with most of the weakness being attributed to natural disasters. Overall, such GDP figures would endorse the BoJ’s reluctance to consider an exit from its gargantuan stimulus program, and hence are unlikely to impact the yen much, which may instead continue to respond more to shifts in risk sentiment.

Japan’s economy is forecast to have shrunk by 0.3% on a quarterly basis in Q3, a turnaround after growing by 0.7% in the previous quarter on the back of strong growth in exports and capital investments. Yet, much of the weakness in Q3 may be owed to “one-off” factors, namely the natural disasters that plagued the nation, from typhoons to a major earthquake. These are expected to have affected factory operations, as well as the tourism industry – the number of foreign visitors to Japan fell in September for the first time since 2013.

Hence, the Bank of Japan (BoJ) may “look through” some of the softness in Q3 GDP as being owed to transitory factors, implying this contraction may not have as much of an impact on policy decisions as it would normally. It follows then, that absent a major deviation from forecasts, the yen is unlikely to see much volatility from this release. 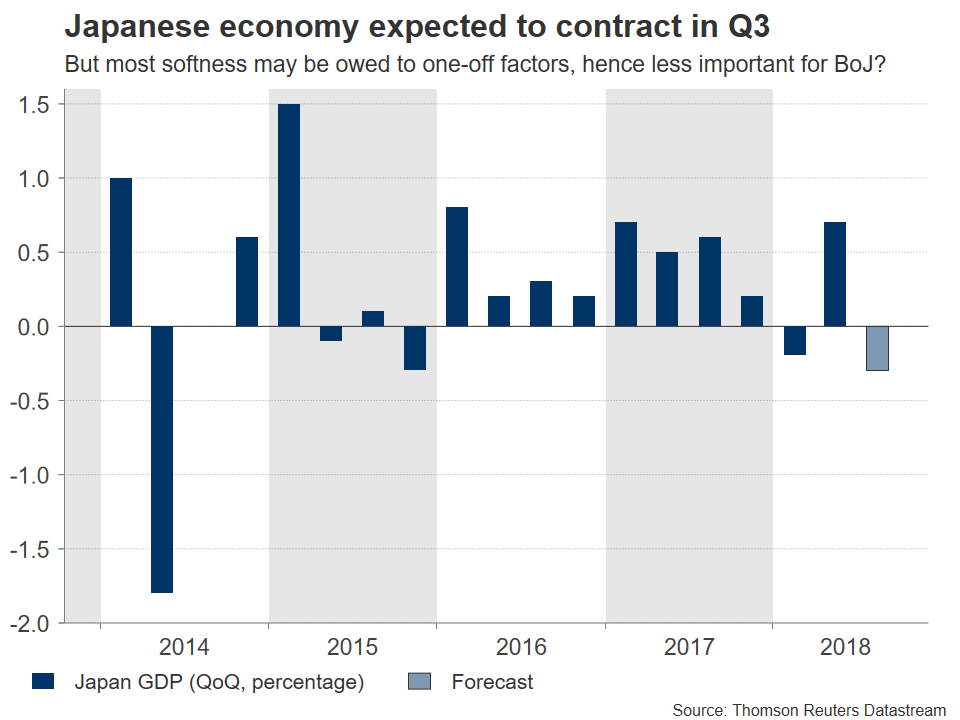 In fact, the Japanese currency rarely responds to incoming data in general. To understand why, consider the example of another central bank – the Fed. When US data pick up steam, investors bet that the Fed will raise interest rates faster, which in turn pushes the dollar higher. Now contrast this with the BoJ, which is not expected to either raise rates from record low levels anytime soon, nor scale back the massive amounts of Japanese bonds it buys. Thus, investors do not rush to either buy or sell the yen on data releases that probably won’t have a big enough impact to lead the BoJ to consider policy changes.

Instead, the yen has been responding much more to changes in investors’ risk appetite, given its “safe-haven” status. Lately, the currency has been attracting inflows almost only in sessions when Sino-American trade tensions flare up, or equity volatility reaches high enough levels for market participants to seek defensive assets. While it’s nearly impossible to predict when these may occur as they are driven by fresh headlines, the pattern in recent months has been that haven-boosts to the yen tend to be sporadic and short-lived, typically fading after a few days as traders digest the risks and judge they require less defensive exposure in the bigger picture.

Technically, further advances in dollar/yen may encounter preliminary resistance near the one-year high of 114.54, reached on October 4. An upside break could open the way for a test of the 115.15 barrier, defined by the highs of March 14, 2017. Even higher, the 115.50 hurdle, this being the peak of March 10, 2017, may attract attention.

On the flipside, declines in the pair could stall initially near 113.30, marked by the high of October 10, with the area around it encapsulating another peak from October 31, at 113.40. If the bears pierce below it, the 111.75 zone would attract attention, assuming the 50-day simple moving average at 112.63 is violated first. Lower still, the September 7 low at 110.35 would increasingly come into view.