The latest PMI business surveys from the euro area will hit the markets early on Wednesday, starting with the French numbers at 08:00 GMT. They are expected to confirm the economy is headed straight into recession, making the ECB’s rate decision next month even harder. As for the euro, despite the recent bounce, it’s still too early to envision a sustainable recovery.

The economic data pulse in the Eurozone has been weakening for several months now, as the energy crisis spiraled out of control. With soaring energy costs serving as rocket fuel for inflationary pressures, consumers have seen their real incomes decline and business confidence has fallen off a cliff.

Worst of all, the European Central Bank cannot ride to the rescue this time. With inflation running in the double digits, policymakers have little choice but to keep raising interest rates at an extraordinarily fast pace. Over time, this will cause lending to dry up and squeeze consumers even more, inflicting more damage on the economy.

The silver lining is the recent decline in energy prices. After European governments announced they’ll intervene in the power market, prices fell very substantially. Most nations had already stockpiled energy supplies for the winter, so investors saw the forceful intervention as a sign that the worst had passed, for now. 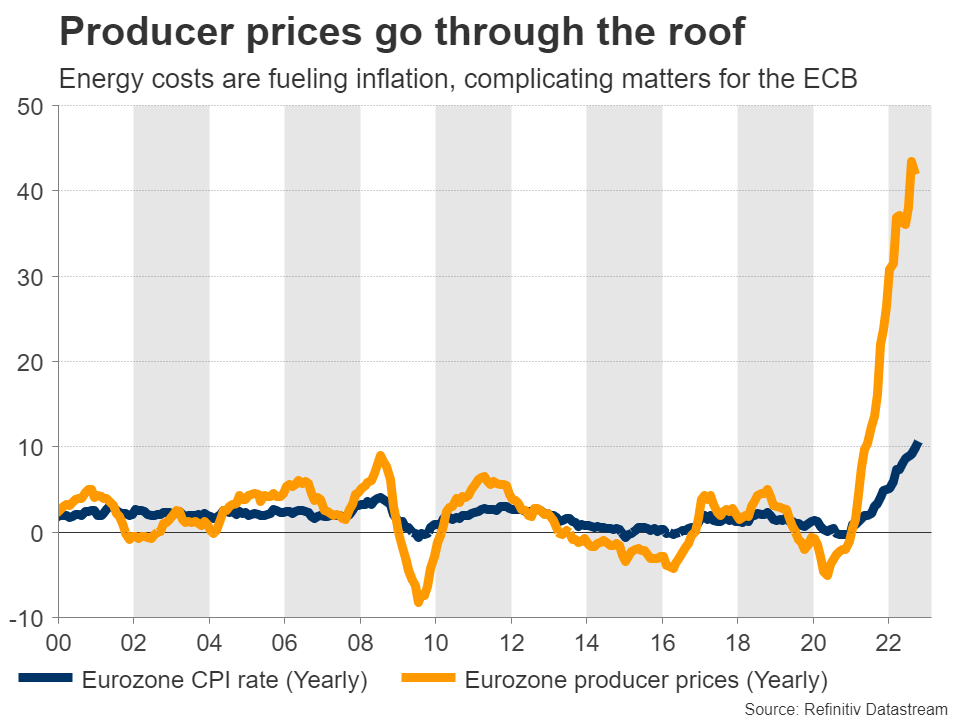 Make no mistake, there will still be a recession. Too much economic damage has already been done. The good news is the downturn probably won’t be as long or as deep as investors feared just a few months ago.

Investors will get an update on how businesses view the economy with the latest batch of PMI surveys on Wednesday. On the Eurozone level, both the manufacturing and the services indices are expected to have slipped further into contractionary territory in November.

That would reaffirm what the European Commission’s latest forecasts suggested, namely that the recession will begin this quarter already. Markets are currently leaning towards another 75bp rate increase when the ECB meets again next month, but a batch of worrisome business surveys could tip the scales back towards a smaller hike of 50bp, dealing a blow to the euro. 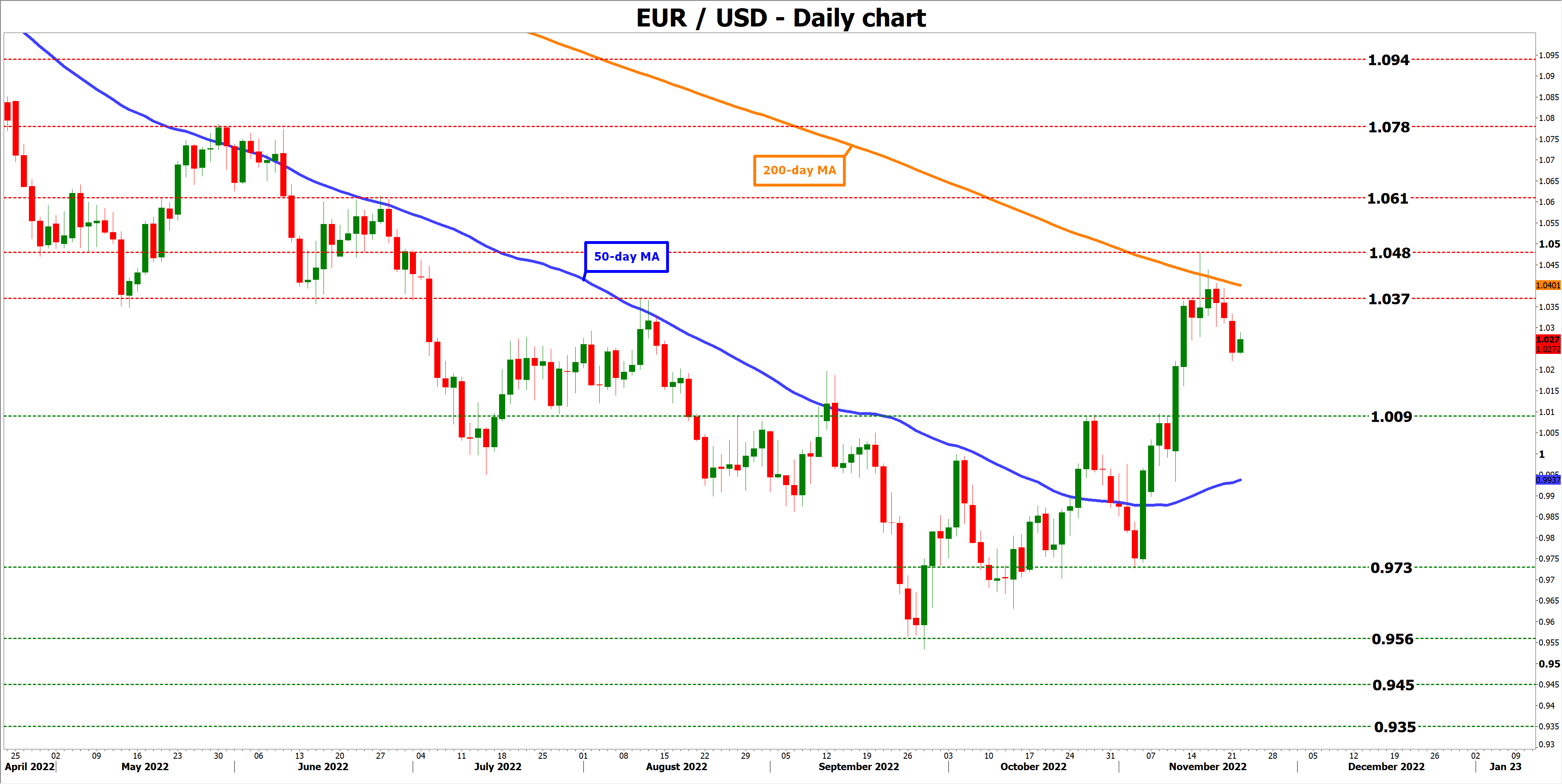 In this case, euro/dollar could edge lower for a test of the 1.0090 region, defined by the peaks of October. On the other hand, a set of surprisingly strong numbers could cement the case for another 75bp hike, propelling the pair higher towards the 1.0370 zone.

Too early for a reversal

In the bigger picture, it’s still difficult to be optimistic on the euro, as the next few months will probably be a tough period for the Eurozone economy, especially in case the winter is particularly cold. Even though the US economy is losing steam too, the situation is not as worrisome yet, and it will probably take longer before it falls into a recession.

For a trend reversal to become a realistic scenario, the euro would need a positive catalyst to dispel the current gloom. Peace talks between Ukraine and Russia could do the trick, as the mere possibility would also hammer energy prices lower. 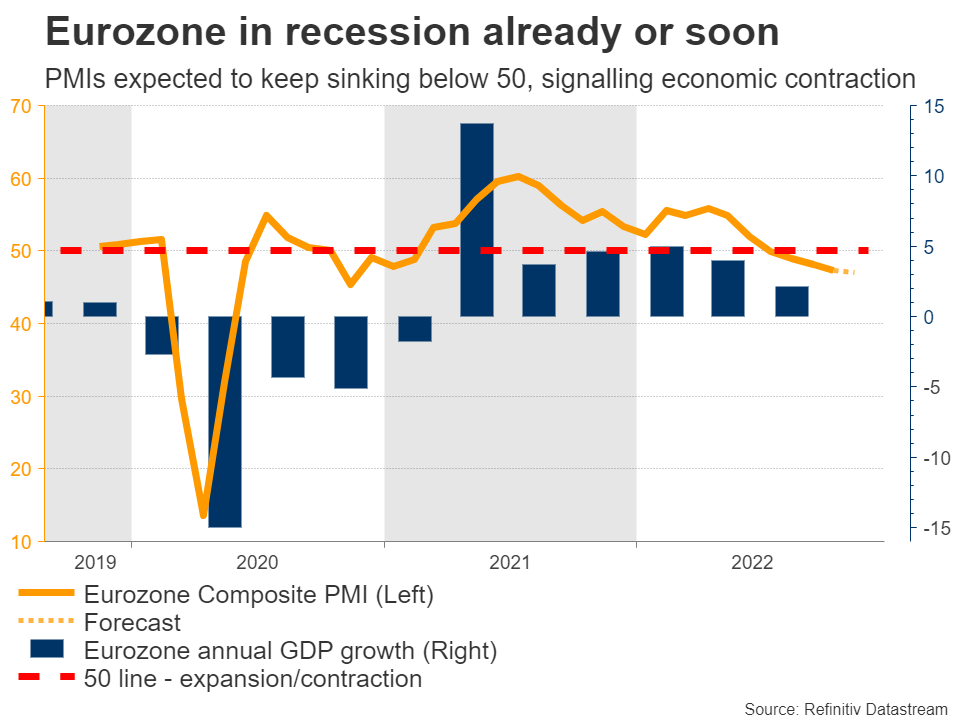 Other upside risks for the euro include a sharp cooldown in US inflation that leads the Fed to pause its tightening cycle, or signs that China will open the stimulus flood doors to support its embattled economy.

Unfortunately, none of these elements are realistic at this stage. Hence, the prospect of a trend reversal remains premature, and probably a story for next year.