It’s a busy week for UK data releases as some crucial indicators on inflation, consumption and overall economic activity are due ahead of the Bank of England’s policy meeting in the first week of November. The latest read on the consumer price index is out on Wednesday (06:00 GMT) and will be followed by retail sales (06:00 GMT) and flash PMI (08:30 GMT) data on Friday. Intensifying speculation that the BoE is getting ready to raise interest rates for the first time in three years have revived the pound, which had fallen to 9-month lows versus the US dollar at the end of September.From crisis to crisis

Although the UK economy has rebounded strongly this year and is expected to fully recover from the virus crisis by the end of the year, the post-pandemic and post-Brexit realities are biting hard. Britain is facing a chronic scarcity of workers across several industries, with the shortage of truck drivers likely being the biggest threat to the economy as it impacts everything from fuel distribution to petrol stations to food delivery to supermarkets.

Wage growth has already started to heat up as businesses struggle to find the staff they need. Average weekly earnings hit 8.8% y/y in the three months to June – an all-time high for the current data series. They’ve since eased to 7.2% y/y, but judging from the continued robust gains in employment, the surge in wages could only be the start. 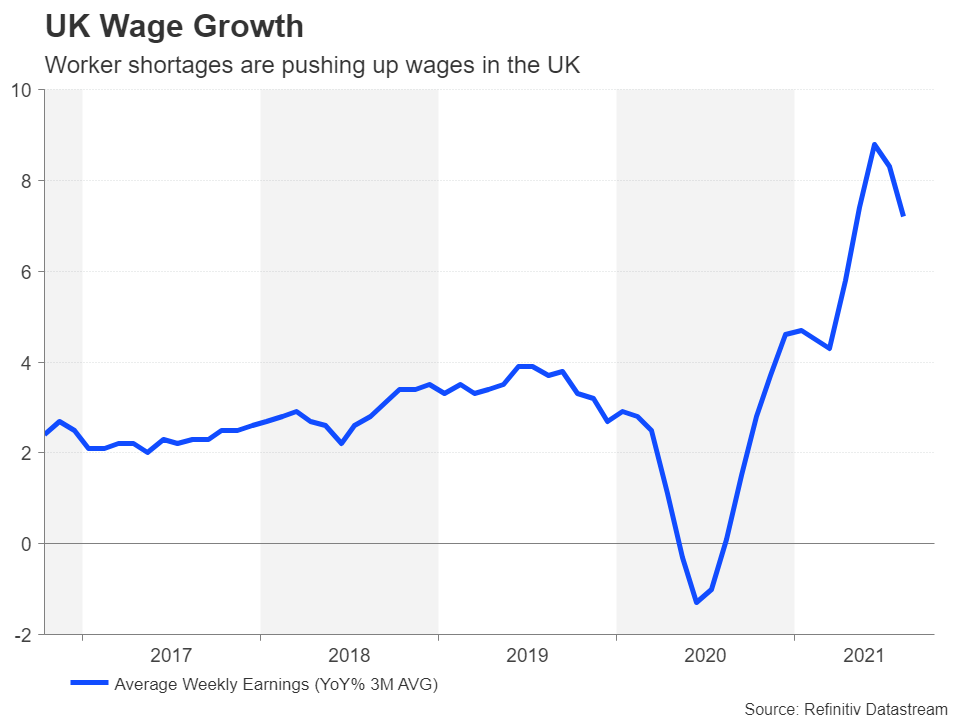 Wage acceleration is here to stay

The government has launched temporary visa schemes to tackle the worker shortages in the worst hit industries. However, some ministers, including Boris Johnson, have suggested that higher wages are a good thing, an intended consequence of Brexit and all part of plans to level up Britain. This suggests the government isn’t about to relax immigration rules and businesses will probably have to significantly increase their salary offers to attract the right workers, not just in the short term, but over several years.

The trouble is, rising wage costs are not the only thing firms are having to deal with at the moment. Broadening supply shortages and soaring input costs are causing a lot of pain and have already toppled several UK energy providers. But there is another big headache awaiting businesses – higher interest rates.

The Bank of England is worried that rising price pressures are not as transitory as central bankers around the world had initially predicted. Governor Andrew Bailey recently joined the hawkish camp in the Monetary Policy Committee (MPC) and warned on Sunday that the Bank would have to act if there are signs that higher inflation is becoming sticky.

Both market- and consumer-based measures of inflation expectations have spiked higher lately and this week’s data could further cement bets that the Bank could move as early as the November 4 meeting.

UK inflation shot up to a nine-year high of 3.2% y/y in August and although it is projected to have held steady in September, it likely hasn’t peaked yet and looks set to climb further in the coming months. Core CPI, which excludes volatile items such as food and energy, is expected to have dropped marginally from 3.1% to 3.0% y/y. 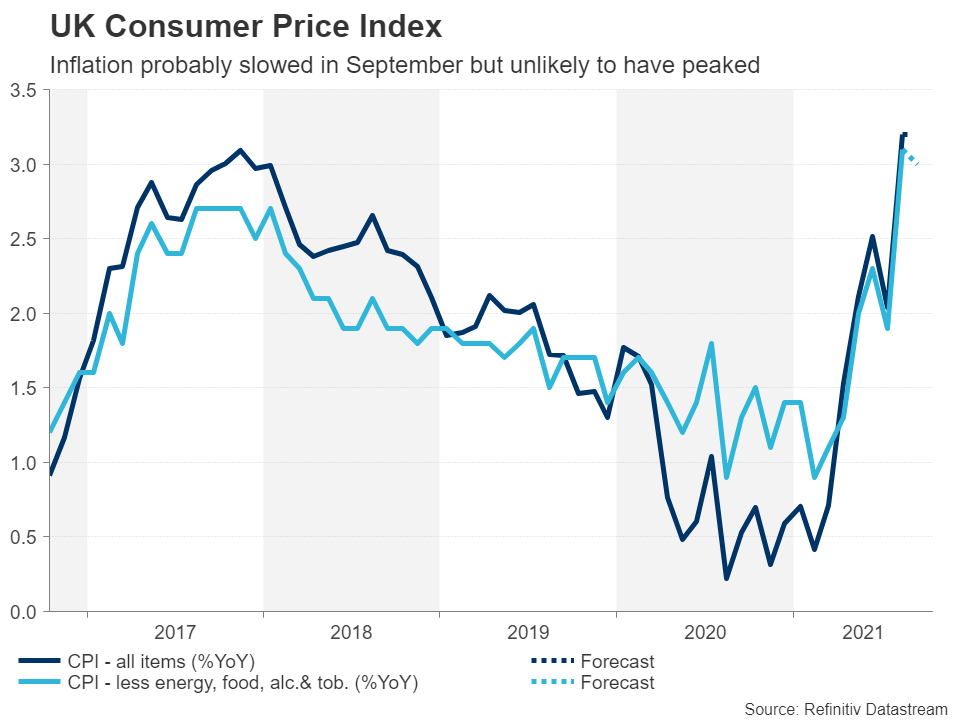 Retail sales figures could also have the power to sway MPC members that are on the fence in a particular direction as sales have been sluggish since May amid some disappointment that the reopening effect faded quickly for UK consumers. Forecasts are for retail sales to have bounced back by 0.5% month-on-month in September, though this would still leave sales 0.4% lower over the year.

As for the flash PMI readings, the composite PMI is expected to decline from 54.9 to 54.0 in October, which would be the lowest since February when the country was in lockdown. The manufacturing and services components are both forecast to have fallen back. 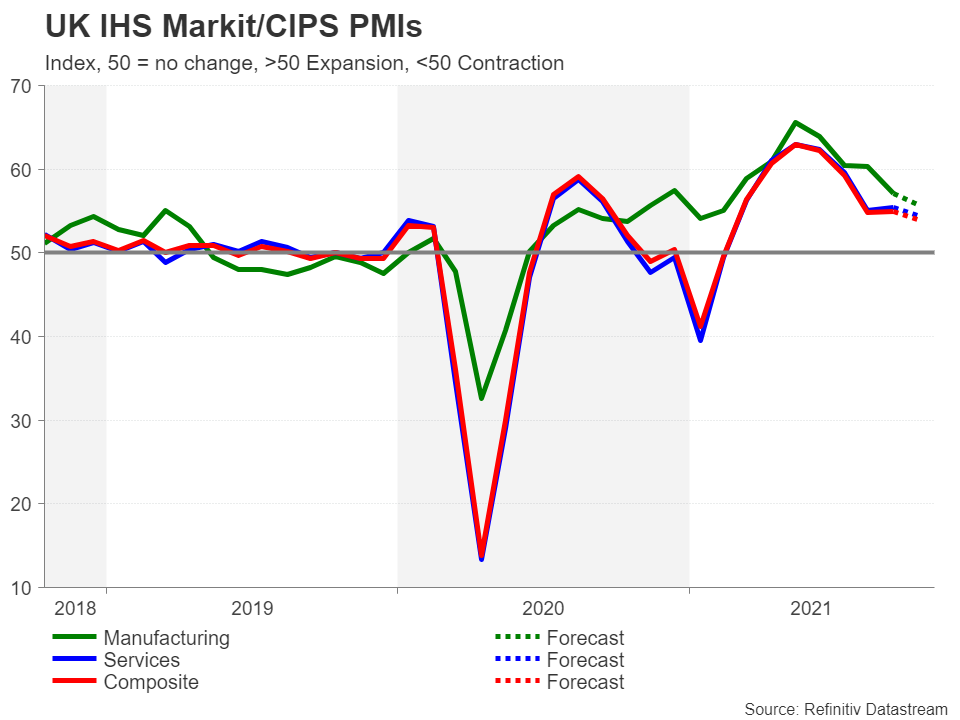 Pound’s latest gains may not be sustained

With growing alarm by policymakers at the persistent strength of inflation, hotter-than-expected CPI numbers would likely offset any negative surprises in the retail sales and PMI figures. The question is, can increasing market odds that the BoE will hike rates this year stretch the pound’s rebound?

Market pundits think there’s about an 85.0% probability of higher rates by November. Yet, sterling has not managed to break above its descending trendline despite the sharp rebound from the September trough. Should it succeed in doing so, the 50% Fibonacci retracement of the June-September downtrend at $1.3829 could become the next critical resistance area as the 200-day moving average has flatlined just above it.

If, though, this week’s releases dampen rate hike expectations, pound/dollar could slip below the immediate support of its 50-day moving average to head towards the 23.6% Fibonacci of 1.3608.

While a stronger greenback has as much to do with cable’s downtrend as the darkening clouds gathering over the UK economy, the failure of a breakout in the next couple of weeks or so would not bode well for sterling’s short-to-medium term outlook.