The flash PMI releases by S&P Global are one of the monthly highlights of the Eurozone calendar as the forward-looking indices tend to track GDP growth in the euro area quite closely. The first look at the June readings is due Thursday (08:00 GMT) and investors will be scouring for clues about how close the Eurozone economy is to stagflation. The forecasts suggest the danger is quite low for now. But can the data offer the bruised euro any relief?No let-up in energy crisis

Ever since the war in Ukraine erupted, there has been no let-up in Europe’s energy crisis. Just as oil prices have started to pull a little lower, gas futures are spiking again after Russia began to reduce shipments to major European buyers. The prospect of energy prices staying elevated for longer does not bode well for the monetary policy outlook. 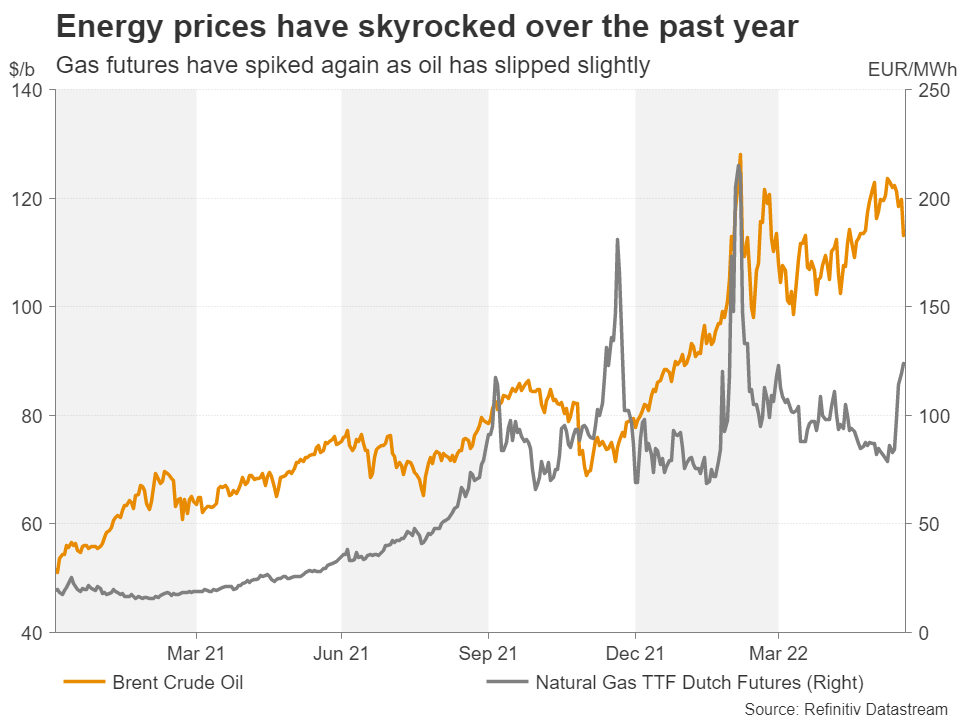 The European Central Bank is almost certain to hike interest rates by 25 basis points at its July meeting and calls for a larger increase in September are growing louder. Although the policy paths of the ECB and Federal Reserve have diverged significantly this year, the two central banks are similar in that they are both leaning against the strength of their respective economies as they plough ahead with tightening policy during these highly uncertain times.

Eurozone GDP grew a lot faster than projected in the first quarter, but inflation has also been a lot stronger than anticipated; the headline CPI rate hit 8.1% y/y in May. The massive energy-driven surge in inflation since the beginning of the year combined with a surprisingly resilient economy make it all the more likely that the ECB will hike interest rates very aggressively over the coming months.

But this would carry a lot of risks as raising rates too rapidly could choke off economic growth. Survey data already point to some loss of momentum. The euro area’s composite PMI, consisting of the manufacturing and services sectors, fell slightly to 54.8 in May and is expected to have moderated further in June to 54.0. The slowdown in manufacturing seems to be more pronounced amid the shift to services, as European economies fully reopen, as well as the ongoing supply constraints. The manufacturing PMI could hit the lowest in June since November 2020. 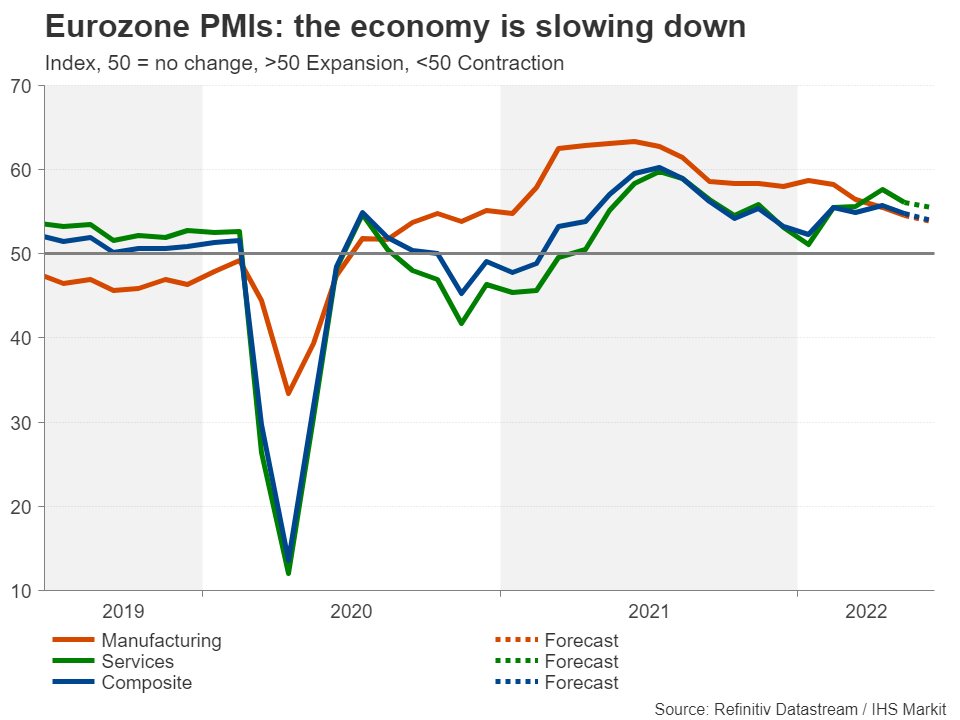 Nonetheless, stagnation does not appear to be on the near-term horizon, let alone a recession. Even Europe’s rigid labour market has come out of the pandemic in stronger shape than before, giving policymakers additional credence to begin normalizing policy.

Euro is bouncing higher, but does it have enough legs?

Should the June PMIs underscore the view that the Eurozone economy is merely losing steam but is far from recessionary territory, the euro could extend its latest bounce back. Euro/dollar is currently testing the 50% Fibonacci retracement of the May uptrend at $1.0567. A climb above this level would bring into focus the 50-day moving average, which is about to intersect the 38.2% Fibonacci of $1.0619, before traders turn their attention to the May peak of $1.0786.

However, any negative shocks in the PMI data could cause the rebound to falter, risking a re-test of the $1.04 level. Breaching this support could accelerate the selloff initially towards the May tough of $1.0348 and then towards the 123.6% Fibonacci extension of $1.0245.

In the somewhat more medium term, the euro is likely to consolidate during the course of the summer as investors will be watching how the growth and inflation outlooks evolve for clues as to how aggressively the ECB will act later in the year. Though, whether the Fed remains as hawkish as it currently is will be just as crucial in determining the euro’s direction.