Despite the latest efforts by several Fed officials to douse market speculation with regards to an imminent pivot, investors are still pricing in almost two quarter-point rate cuts by the end of 2023. With that in mind, they may dig into the minutes of the latest FOMC gathering for clues as to what policymakers discussed with regards to next year’s policy plans. The minutes will be released on Wednesday at 19:00 GMT, but beforehand, market participants may have the opportunity to adjust their positions based on the results of the preliminary Purchasing Managers’ Indices by S&P Global, due out at 14:45 GMT.Market scales back hike bets after inflation slowdown

At the November gathering, Fed officials delivered their fourth consecutive 75bps rate hike, hinting that smaller rate increments may be on the cards for the months to come. That said, at the press conference, Fed Chair Jerome Powell said that it is very premature to be thinking about pausing, adding that the terminal level of interest rates may be higher than previously estimated. The outcome kept investors evenly split between 50 and 75 basis points with regards to the size of the December hike, but allowed them to lift their terminal rate to near 5.15%.

Nonetheless, the picture was altered again just after the US inflation data for October revealed a bigger than expected slowdown, almost fully convincing market participants that the size of the next rate increment will be 50bps. Currently, they are assigning an 80% probability for such a move, with the remaining 20% pointing to 75bps. They are also pricing in nearly two quarter-point rate cuts by the end of next year, despite several policymakers trying to push against bets of an imminent pivot. 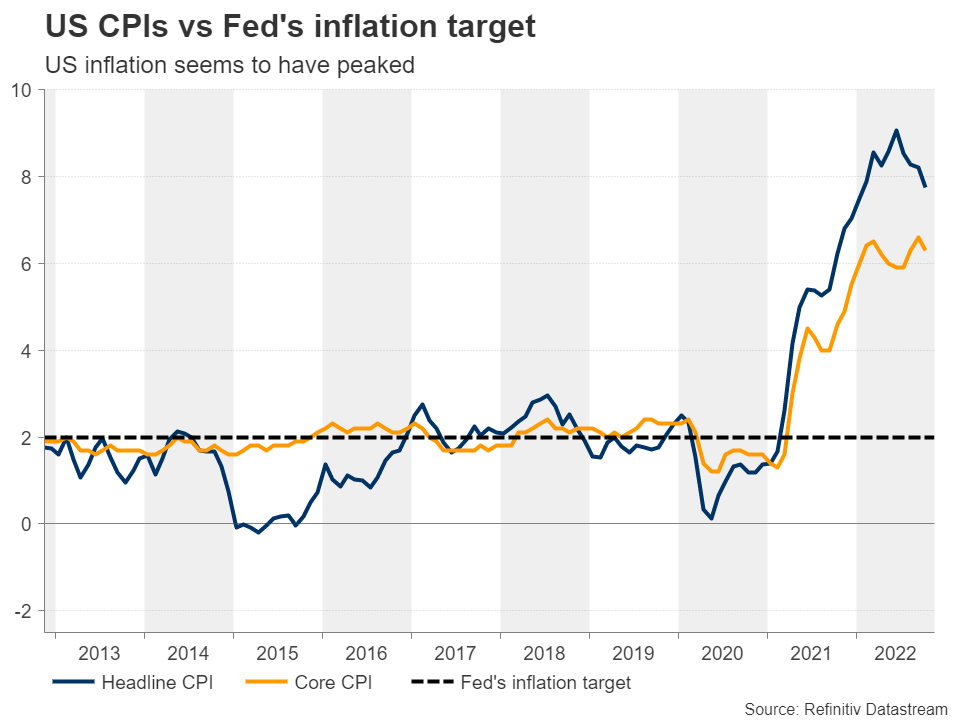 Looking for hints on future course of action

Therefore, although the minutes could be considered as outdated given that they will reflect officials’ opinions before the inflation data was out, investors may still be interested in any conversation with regards to interest rates’ future course. After the latest gathering, several policymakers have clearly suggested that when interest rates hit their terminal level, they will stay there for some time. However, any hints in the minutes pointing to even the thought of a cut towards the end of 2023 could enhance speculation on that front, as such discussion would have taken place prior to the CPI data, meaning that if some of them thought about it then, the discussion may be more intense at the upcoming meeting. Something like that could hurt the dollar and encourage some stock buying. 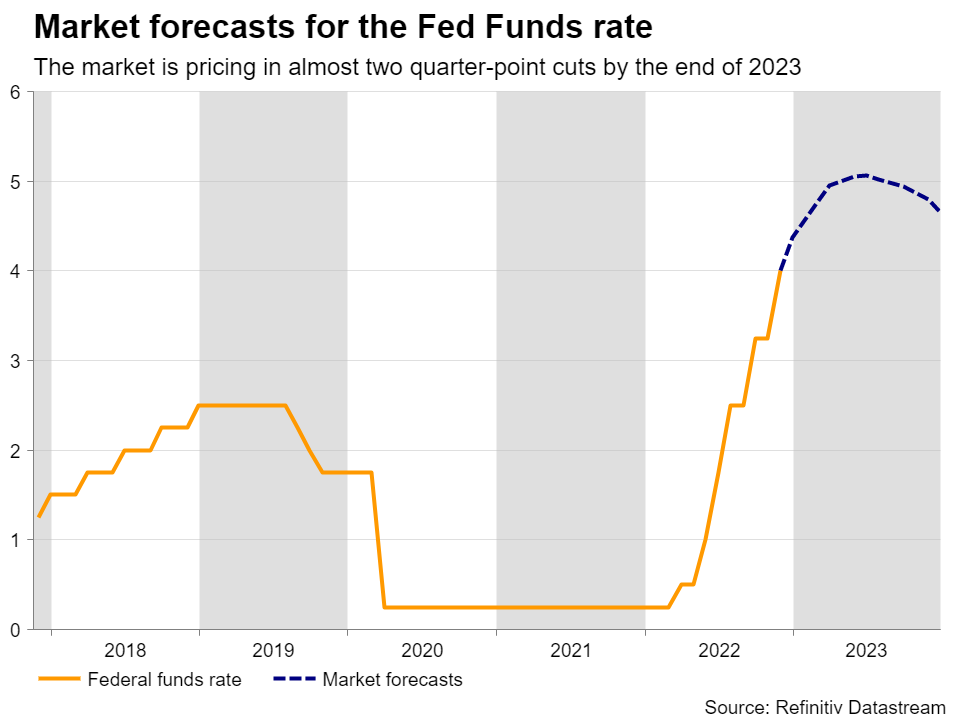 On the other hand, anything strengthening the narrative of a higher terminal rate and a prolonged pause before they start considering a cut could have the opposite effect, especially if investors keep in mind the latest rebound in the 1-year inflation expectations. Treasury yields could drift higher, adding some fuel to the dollar’s engines, while Wall Street may come under some selling interest a day ahead of Thanksgiving Day. 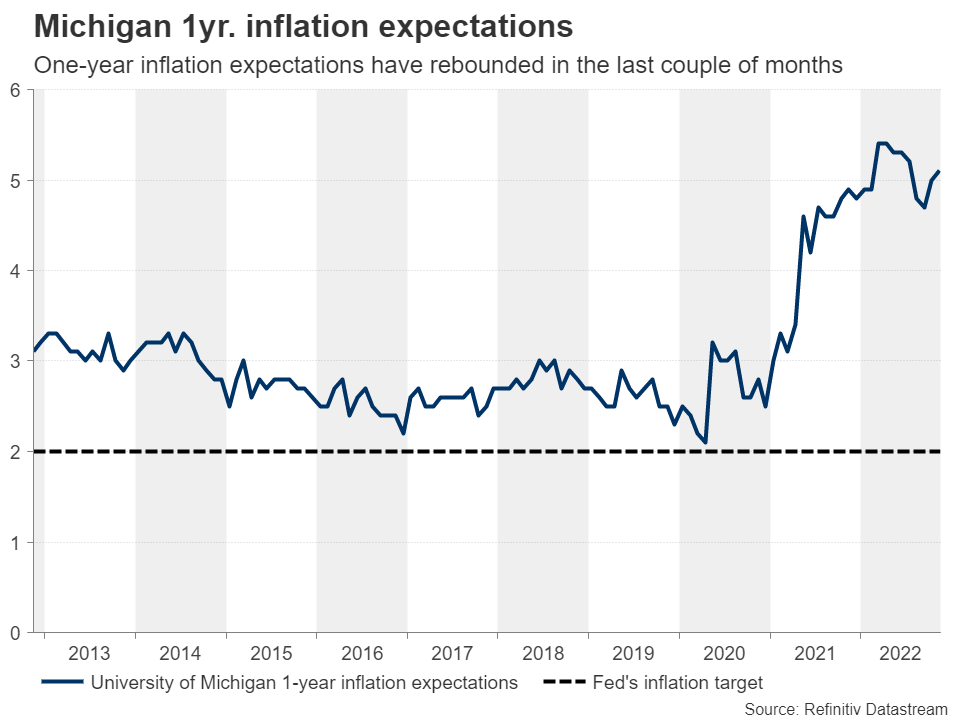 However, market participants may have the opportunity to act on more up-to-date information before the minutes are released, as due to the holiday-shortened week, Wednesday will end up being a data-dump day for the US. Among the releases are the initial jobless claims for last week, the preliminary University of Michigan consumer sentiment index for November, which will be accompanied with updated 1- and 5-year inflation expectations, the new home sales for October, which are expected to have slid again, and the flash S&P Global PMIs for November. The services index, already within contractionary territory, is expected to have ticked down, and the manufacturing print is forecast to have just crossed below the boom-or-bust zone of 50. Such numbers may add to worries about a recession and perhaps result in the liquidation of some more long dollar positions ahead of the minutes.

Euro/dollar has come under selling interest from near the 200-day exponential moving average following the latest attempts of some Fed officials to push against expectations of a pivot, but it remained above the 1.0200 zone, marked by the inside swing high of September 12, and well above the upside support line drawn from the low of September 28. This keeps the likelihood of a rebound well on the table.

Even if the price drops below 1.0200, the bulls could take charge from near the 1.0100 zone and aim for another test near the 1.0400 area and the 200-day EMA. Should they manage to overcome that hurdle, they may extend their advance towards the 1.0615 territory, defined as resistance by the high of June 27.

On the downside, a break below 0.9730 may be the move that would signal the resumption of the prior downtrend. The bears may get encouraged to dive towards the low of September 28 at 0.9535, the break of which would take them into territories last seen in 2002. The next territory to consider as support may be at around 0.9335, marked by the low of June 6 of that year.