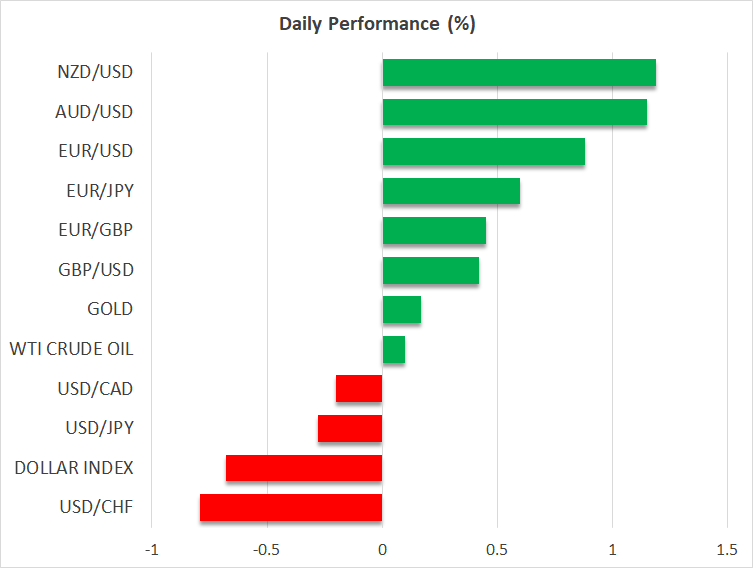 Market sentiment remained broadly positive on Tuesday but there was a greater sense of cautiousness amid worries about the earnings outlook, ongoing recession fears and some apprehension ahead of the policy decisions by the European Central Bank and Bank of Japan.

The S&P 500 closed 0.8% lower on Monday, having initially opened with a gap up, boosted by an earnings beat by Goldman Sachs. However, the optimism started to flounder after Bloomberg reported that Apple intends to slow down hiring and spending next year in some of its divisions.

A weaker growth outlook, rising costs and China-related supply disruptions are likely behind those plans. Other tech giants such as Amazon, Microsoft and Google owner Alphabet have already announced a hiring or spending freeze. The stock of the former managed to avoid a negative close but the latter two fell along with many other tech stocks.

The spotlight today is on Netflix, which is set to report its Q2 earnings after the market close. US futures were trading marginally higher as European stocks dipped at the open. Tech shares were a drag on Asian markets too, while lingering doubts about China’s zero-Covid policy was another concern for investors as many regions are still either under lockdown or facing mass testing.

There can be no doubt that this is a very delicate time for investor sentiment as the risks just keep piling. There is a great deal of uncertainty about the supply side of the equation, whether it’s the disruptions caused by China’s lockdowns or Russia’s war on Ukraine. How quickly these supply issues will ease up will determine how soon inflation peaks. Yet, central banks are waging a war on inflation like it’s a demand side problem.

This dilemma is probably being felt most acutely by the ECB as policymakers are staring at record high inflation and stalling economic growth. The ECB had messaged it will raise interest rates by 25 basis points on Thursday, but Reuters is reporting today that policymakers are considering a 50-bps hike.

The euro is surging on the back of this ‘leak’ by ECB sources, spiking above the $1.02 level.

Complicating matters for the ECB, however, is the possibility that Russia may cut off natural gas supplies to Germany and other European countries. There is a heightened sense of anxiety at the moment about whether Gazprom – Russia’s state owned gas company – will reopen the Nord Stream 1 pipeline when scheduled maintenance is completed on Thursday after it declared a force majeure to some of its customers.

Another currency benefiting from a hawkish surprise was the Australian dollar, which rallied after the minutes of the Reserve Bank of Australia’s July meeting flagged more rate increases ahead. The policy discussions in the minutes pointed out that rates were “still very low” given the tight labour market and rising inflation, suggesting that a more aggressive rate path could be on the cards at the next meeting.

The aussie is close to hitting the $0.69 mark and the New Zealand dollar is enjoying similar momentum.

The pound, however, was up by a more moderate 0.5% following yesterday’s strong gains. Nerves about the Conservative leadership contest are starting to creep in amid worries that Foreign Secretary Liz Truss could make it to the final two and beat the current favourite Rishi Sunak.

However, a stronger-than-expected UK employment report was enough to lift sterling above $1.20.

The yen, meanwhile, extended its week-long decline against its major peers, as there is little prospect of the Bank of Japan announcing any policy shifts when it meets on Thursday. But it was firmer against the greenback, which retreated further from last week’s highs. 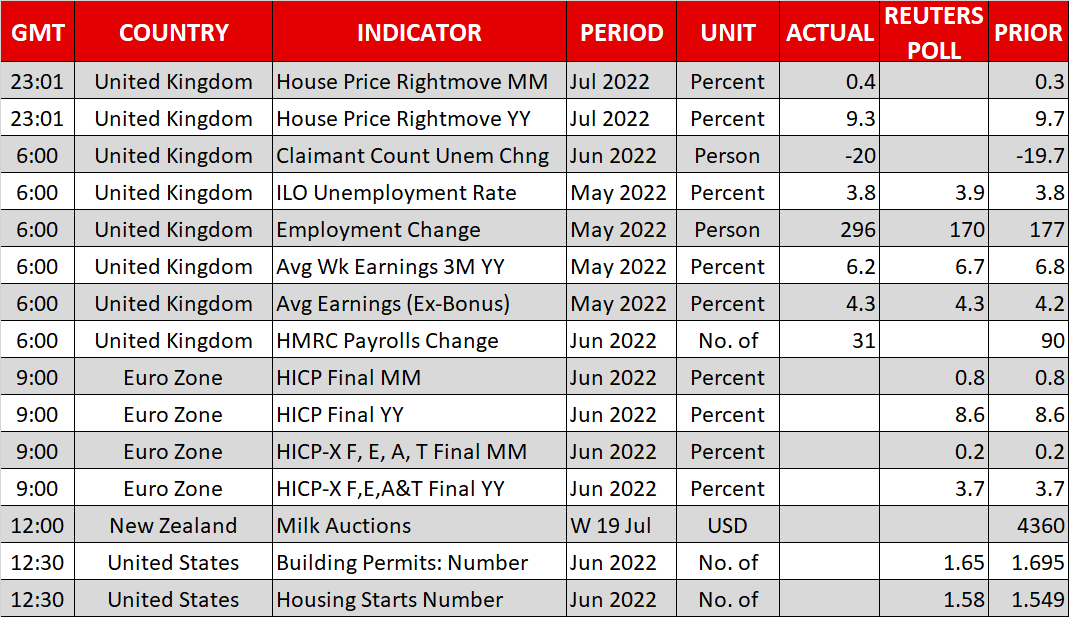