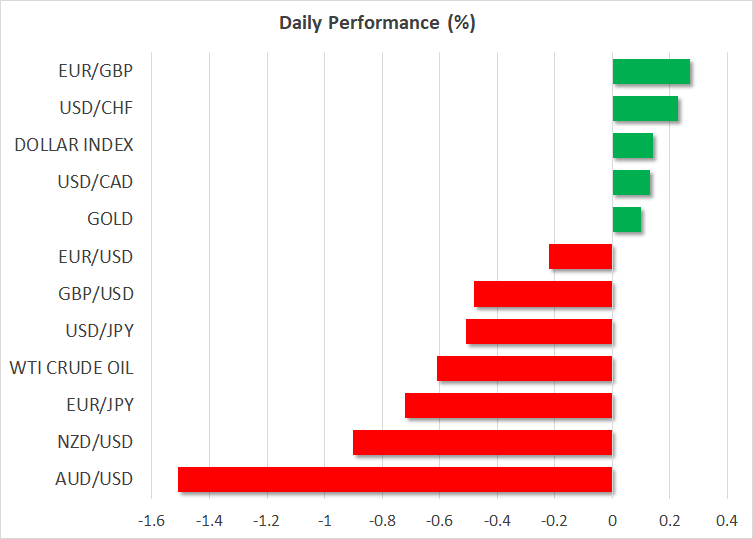 Risk sentiment took a knock on Tuesday as it emerged that the Speaker of the US House of Representatives Nancy Pelosi is on her way to Taiwan, defying China’s strong advice against visiting the disputed territory. Pelosi is currently on a tour of Asian countries and although it had been rumoured that she would make a stopover to Taiwan, her trip was only confirmed late on Monday, sparking threats of retaliation by Chinese officials.

Fears of a reprisal from Beijing have upset the market calm. Only on Friday, the VIX volatility index had fallen to the lowest in three months as the rebound on Wall Street got onto a more solid footing. But the VIX index has jumped higher today and US stock futures are declining, pointing to a second straight session of losses for the S&P 500.

Earnings results from AMD, PayPal, Starbucks and Caterpillar may bring some positive excitement later on for US traders, and in London, the FTSE 100 was outperforming its European peers thanks to bumper profits from oil giant BP, but the mood overall was sombre.

It’s quite likely that markets are overreacting to Pelosi’s visit to Taiwan and China’s response might not involve anything more than putting on a show of military force during her stay on the island. But the fact that the timing coincides with renewed jitters about a recession following yesterday’s downbeat PMI indicators globally, investors are nervous about even the slightest possibility of China retaliating with fresh trade restrictions on US imports.

The heightened geopolitical risks bolstered bonds, fuelling a 1½-month-long rally that started when expectations around aggressive central bank tightening began to recede. The 10-year US Treasury yield has slumped from just under 3.50% in mid-June to around 2.88% at the time of writing, coming off earlier lows when it hit a more than three-month trough.

The yen also drew safe-haven demand, rising against all of its major peers and pushing the US dollar below the 131 level. The greenback has been struggling from pared back expectations for Fed tightening amid signs that the US economy is cooling and Powell hinting at a slower pace of rate increases down the line.

With the yen already enjoying a mini revival on the back of narrowing yield spreads with Japanese government bonds, it is the clear winner from today’s risk-off episode, while the dollar is barely ticking higher against a basket of currencies.

It remains to be seen whether Fed speakers coming up later today will be able to add more momentum behind the dollar’s attempt to halt its descent. Chicago Fed President Charles Evans and St. Louis Fed chief James Bullard are both set to speak.

Investors will likely be watching for any comments about inflationary pressures beginning to ease after yesterday’s ISM manufacturing PMI survey showed the prices paid index unexpectedly plunged in July.

In other currencies, the Australian and New Zealand dollars stood out as the worst performers, with the euro and pound faring somewhat better.

Sterling is on the backfoot today after a very strong couple of weeks, testing the $1.22 level. But growing expectations that the Bank of England will deliver a double hike on Thursday should keep the currency supported.

The same cannot be said for the aussie, which nosedived 1.50% after the Reserve Bank of Australia cast doubt about further big rate increases even as it lifted the cash rate by 50 basis points on Tuesday as expected. Like the Fed, the RBA refrained from giving guidance on the size of future rate hikes, citing the uncertainty around the outlook, with investors interpreting this as a dovish shift.